We got hit with snow and freezing rain this week–again.  We’ve had more of this wintry weather this year than I’ve seen for a long time.  So, I would say being snowed in saved me a lot of money, BUT, I sent Rob and a couple of the girls out to get supplies for the storm and …..let’s just say we are well supplied for this 2-day storm:)  All kidding aside, I was grateful that they could get some milk and things and Rob also found spiral sliced ham for only 98 cents per pound, so he got one.

I have been sick since Thursday, so I guess I saved money by not going anywhere, and not eating:)  Our extended family is very generous and has graciously shared the flu bug–back and forth between us all.  I think each one gets a little different strain….anyway, hopefully we will all soon be on the mend.  I’ve really only been sleeping, watching tv (really sleeping with the tv on), and have crocheted a little bit.  Did I mention sleeping? 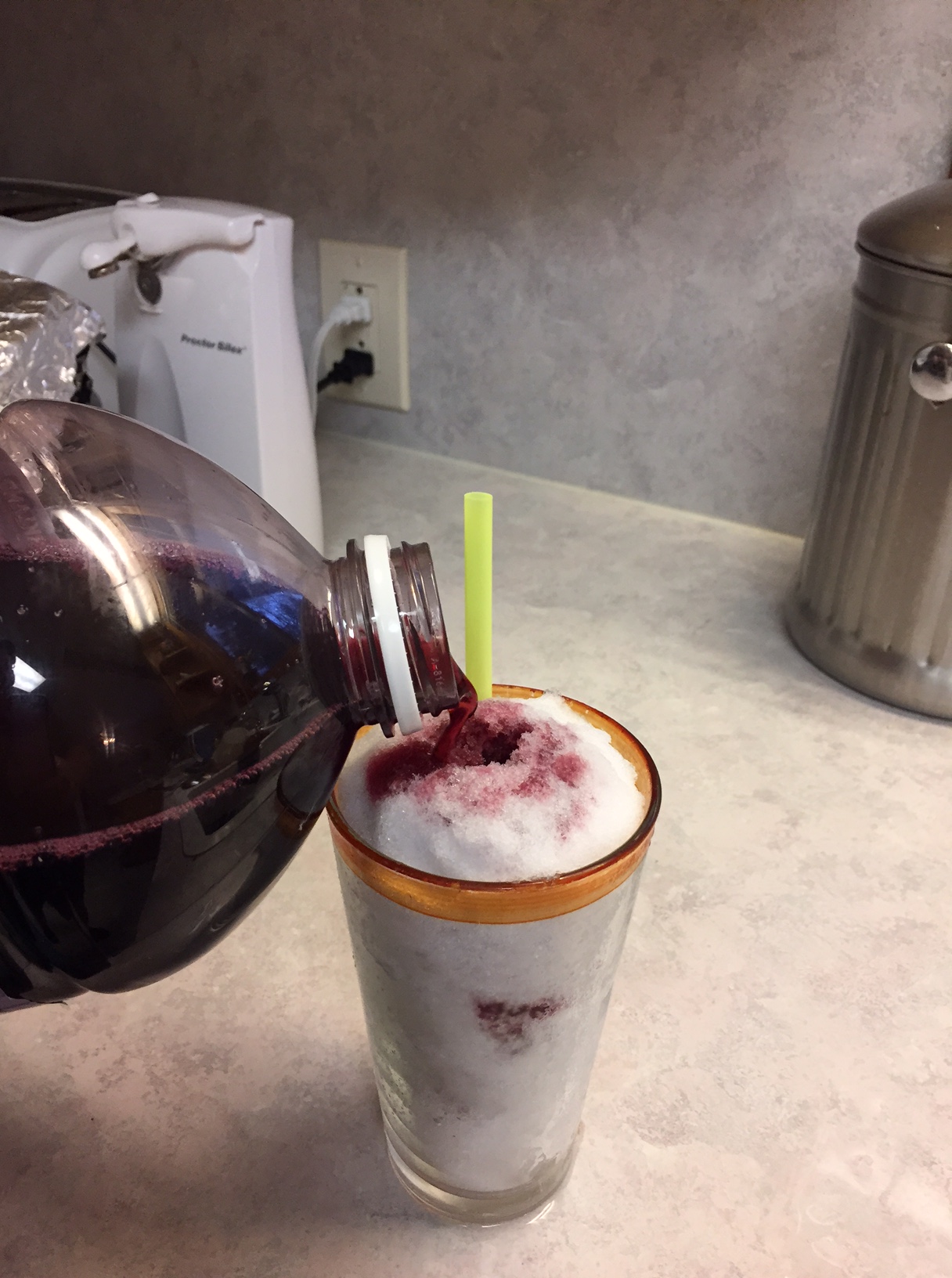 Patsy amused herself by making a couple of “snow cones” from snow and grape juice. 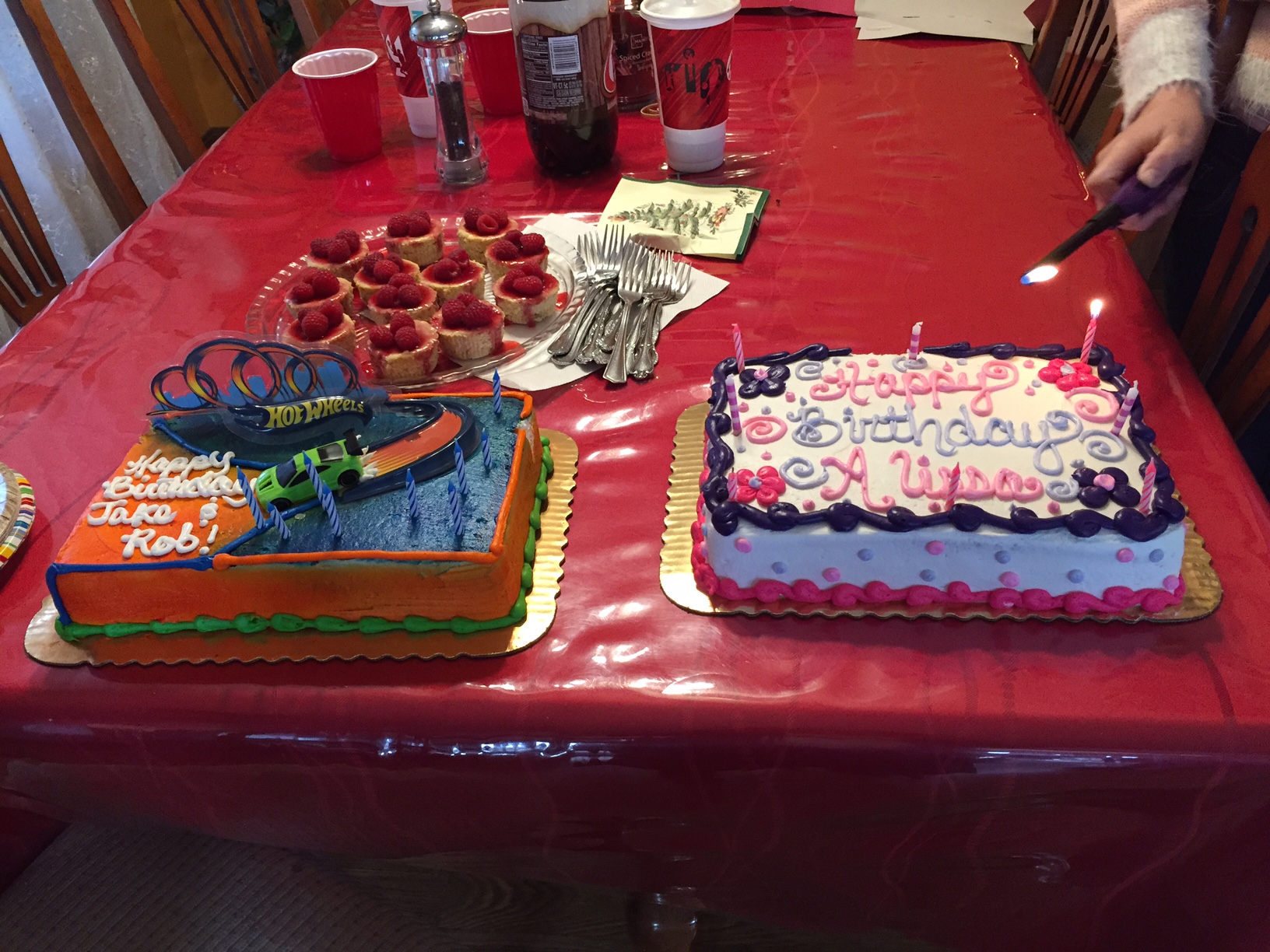 Last Sunday, we had the traditional Rob, Alissa and Jake birthday party.  Rob and Alissa have celebrated each year for the last 17 years, without missing even one.  Jake joined in 9 years ago.  In fact the first time we ever saw him was sitting in a carrier on a table at Chuckie Cheese, where Alissa had dragged Rob for the party (his nightmare venue, but she’s always had him twisted around her finger).  Her birth mom had given birth to a little boy, but, unfortunately,  it wasn’t going to work out for him with her, so he came to live with his big sisters.  It’s hard to believe that so much time has passed.  Ever since Jake came along, Rob gets to share a really cook cake!  Notice the Hot Wheel car.  I will say, Jake decided to keep the car–big surprise.  The best year’s cake was the year where it was a Beauty and the Beast cake–with one end decorated like Beauty (with Alissa’s name) and the other end…….Yep–Rob! 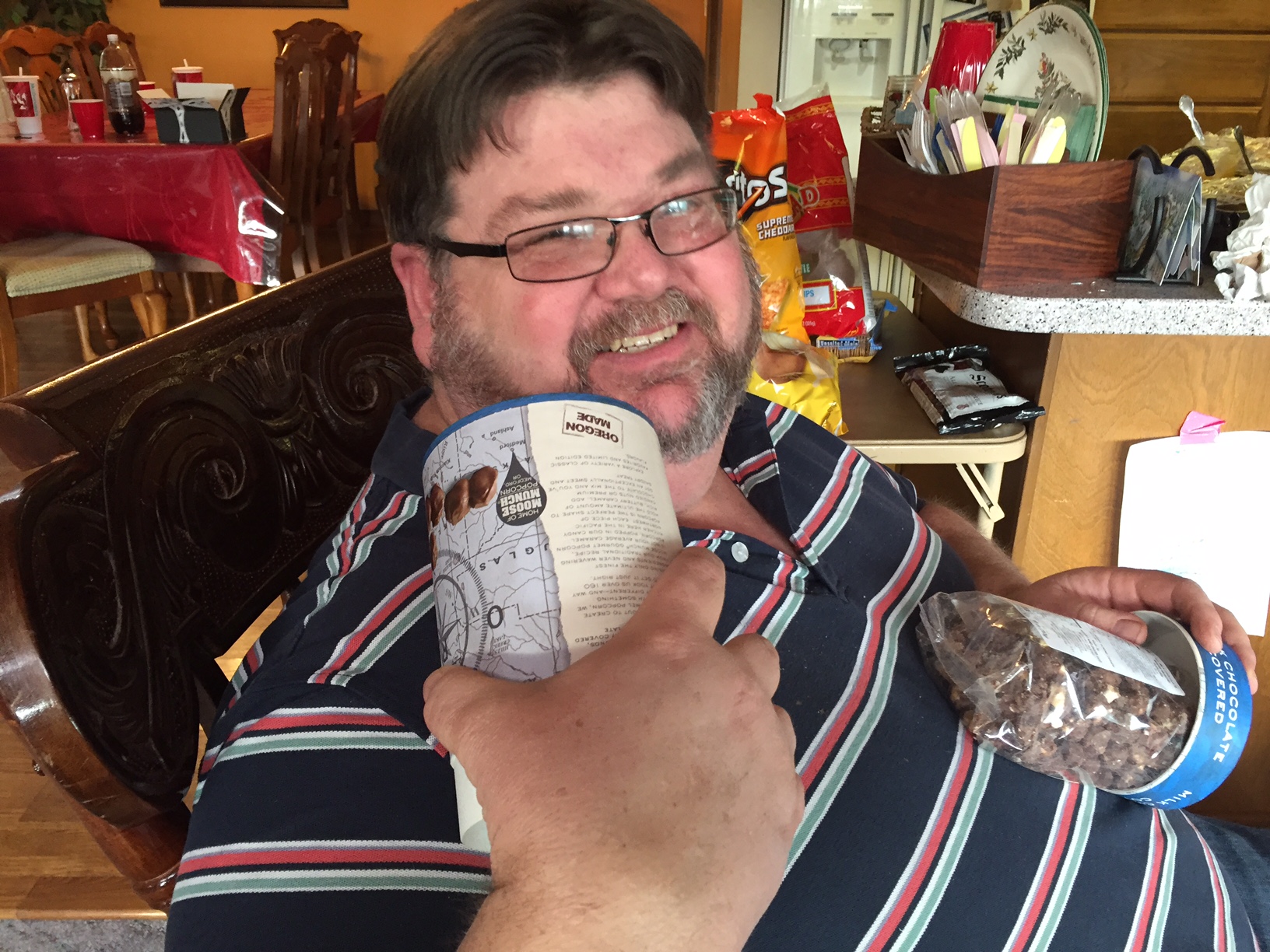 On Christmas, Rob wrapped Alissa’s gift in zip ties–like 50 or more of them.  It was a gift card, so wrapped that way easily.  He loves to play tricks on the kids sometimes like that.  (He super glued Steven’s in a few tins nested together).  She repaid the favor for his birthday, wrapping his gift in a LOT of boxes and duct tape.  Fun! 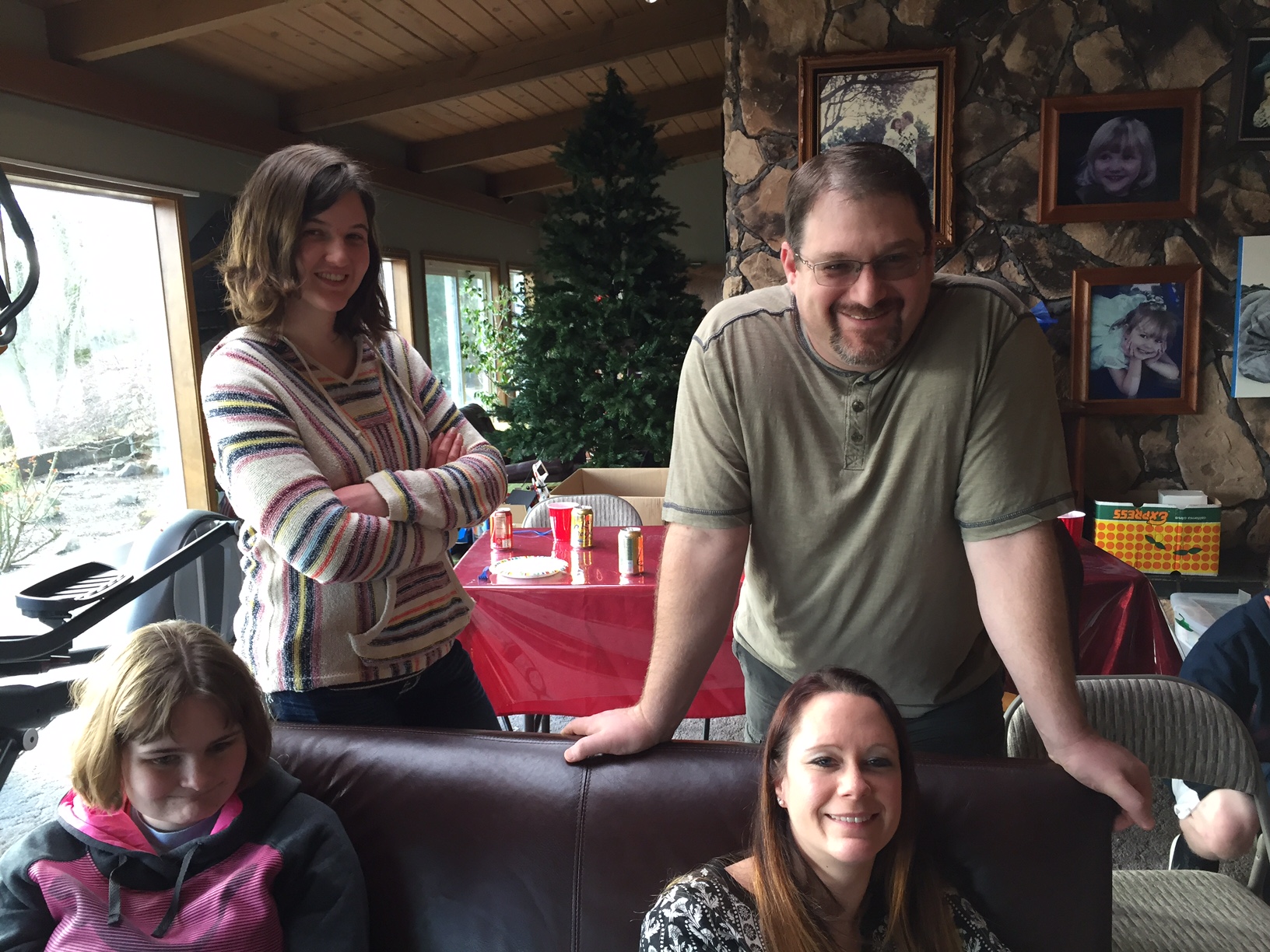 It was great our son-in-law, Keith,  and oldest daughter, Abbie, could join us for the birthday party.  He works long, strange hours, so we did not get to see him on Christmas.  It was a great day!  You can see my niece, Rachel, dimly in the upper left corner–the lighting was really bad for pictures that day.  She is getting ready to go off to Ireland soon–we will miss her, but she will be back in 6 months or so.

In years past, the parties have been more elaborate, and sometimes in places other than our homes.  We find that we almost always end up at someone’s house these days.  It just gives us more time to visit, the special needs kids are not overwhelmed and so we all have more fun, and we can eat what we want–so many special diets nowadays.  The lowered price tag is an added bonus.

Rob hauled another load of firewood down here from my sister and brother-in-law’s farm where we stayed this summer.  He just fills the back of the van up with wood when he goes up there to give them the boxes he has unpacked. He emptied a lot over the break.   (They will use the empty boxes in their u-pick peach business next summer)  We still have a pretty good pile of wood up there, thank goodness.  This winter is cold, and we are heating with the wood stove insert, exclusively.  The camper is being heated by a small electric heater during the cold spell to keep pipes and things from freezing up, but the stove keeps the house plenty warm.  We do have Ja’Ana bring in a pile of wood each night, and Rob gets up and stokes the fire during the night during these super cold nights.  Otherwise, we just rebuild it in the morning.

It was a good week! (Except for the flu)