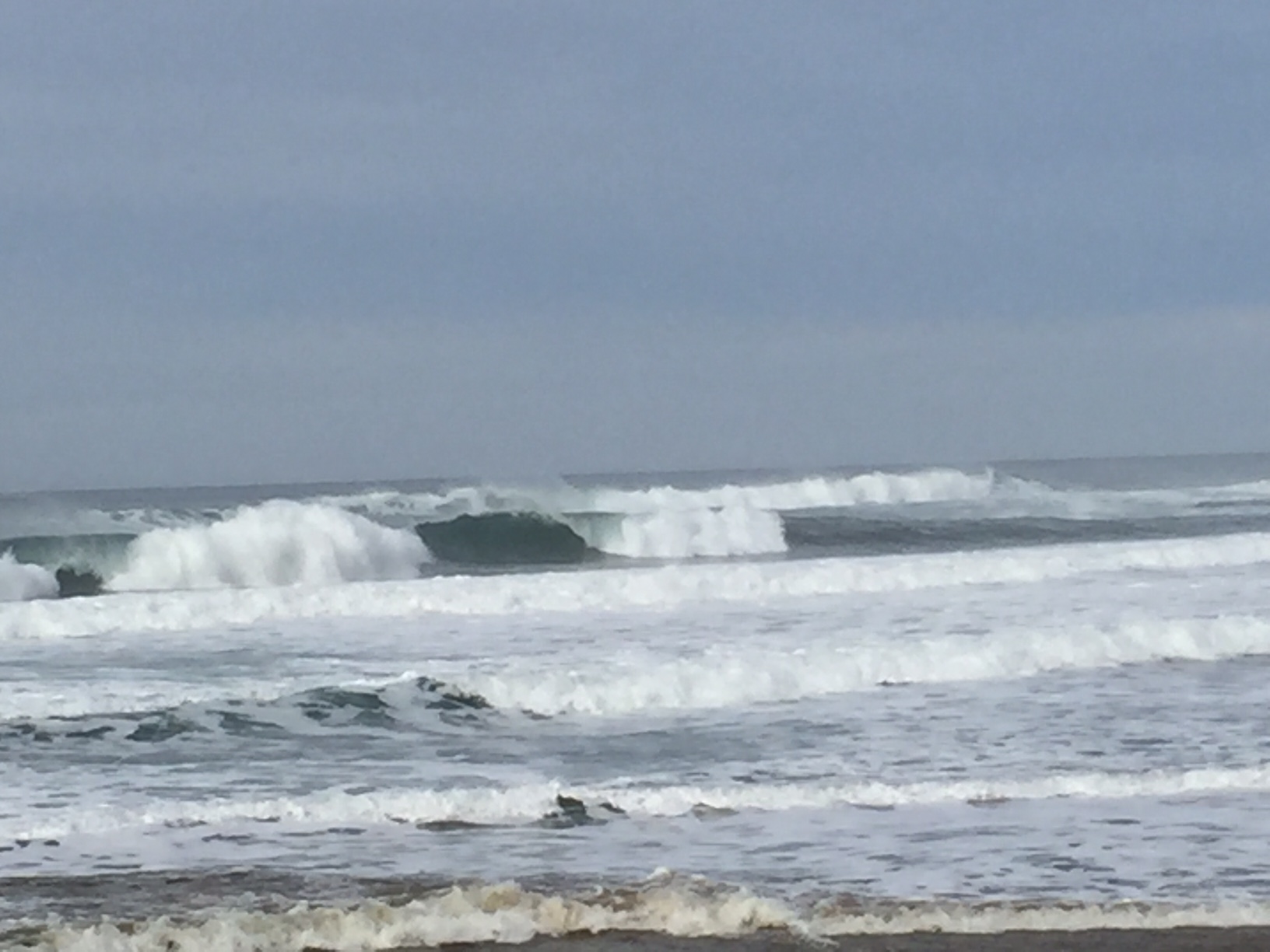 We enjoyed spending Saturday night at the Oregon Coast.  The waves were breathtaking!

My sister and brother-in-law were helping with a high-school retreat with our church.  So, Gail has been cooking and freezing, organizing meals, and planning for weeks, since she was in charge of the food.  She was cooking for around 40.  2 beach houses were rented–one for the boys and one for the girls, plus sponsors.  She went down and got all the food organized, defrosted, etc.  Ron travelled with the group.  Rob and I watched Jake and Michaela.  On Saturday, we drove down to the beach and joined them with the kids.

The teens were still there when we got there, and I helped put a dinner of leftovers out for them.  They had one last singing, message, etc. and then they were off to home, except our girls, who stayed the extra night with us.  Our 2 families stayed the remaining night, using only one of the houses. They were huge, each sleeping 20 people.  They had over 5 bedrooms, 4 or 5 bathrooms, 2 sitting/living areas, a huge kitchen, hot tub, and a marvelous ocean view in each house.   This morning, we needed to clean them up.  Towels and some linens had to be washed.  The kitchen had to be cleaned up and all extra food packed.  Sand had to be sucked up out of the hot tubs, floors swept, rugs vaccuumed, dishes done and put away and counters wiped.  Piles of trash had to be collected.  We had to do a really good job in both houses, because they don’t usually rent to large groups of teenagers, which is why my sister welcomed some help.  And, we did.  In between cleaning, we had lots of time for wave watching and playing Yahtzee.  Some Veggie tales were watched, along with a Thomas the Tank Engine movie.  That place was stocked with so many games, movies and books–my sister said the teens had a blast.

We ate leftovers for all the meals we were there, and ended up bringing home some food as well.  Things that could be saved for future teen outings were saved, and other sponsors took home a few more portable things.  I was able to bring home some leftover pulled pork, breakfast casserole, a few browning bananas which will be frozen tomorrow, and some gourmet snacks and goodies.  Yum!  We had taken a large picnic lunch on Saturday, so I had a big cooler with me, so that worked out good to bring things home safely. I took the younger kids who got left behind to the store.  I let them choose some snacks and junk food to take on our picnic.  It was amazing how much enjoyment they got from choosing their own.  We enjoyed watching the ocean while we ate our lunch.  Afterwards, we took them to ice cream before we joined Jake and Michaela’s parents.  We watched a glass blower for a short time, as well.  It turned out to be an amazingly frugal weekend, because we didn’t eat out, see any sights that charged admission, etc., but enjoyed watching the waves in the luxurious beach house.

Rob broke a piece of his tooth off in early January.  After a couple of unsuccessful attempts to get in to the dentist on a day off, it began hurting badly and he had to take an afternoon off work to get in to have it seen. He didn’t sleep much all week, due to pain.   Our family dentist sent him to a specialist, and he ended up with a root canal.  This man could see him at 7:30 on Friday morning.  I had a diabetes specialist appointment I’d had for months on Friday morning.  We had Jake and Michaela all night Thursday and they were at our house on Friday morning, of course. The plan had been for him to drive us all, keep the kids in the van and entertain them, and come back and get me.  Not happening.  So, I took all kids, including Patsy, to my appointment.  Lovana went with Rob for moral support.  He was worked on for 1 and 1/2 hours.  It was painful, tiring, and stressful for him.  I was in a car with 3 impatient kids, in heavy fog, and got routed around 2 accidents on I-V, and ended up late.  I was so glad they still let me be seen.  Sometimes they don’t if you are late.  I combined another errand with this trip.  I also took those lovely children to McDonald’s, as promised, and felt very happy with the company for existing and have play structures after all that time in the car and waiting rooms.  It made a great bribe for an entire morning of “goodness.”  I actually have great luck with positive reinforcement with the kids.  They were all 3 good as gold during that long ordeal.  It actually took longer for us to get to my doctor’s than it did to drive to the coast on Saturday.

All this to say, we are very thankful that we have dental insurance for the first time in about 30 years.  We still get to pay a lot, but the insurance will cover a large portion.  Since we have paid every cent of my crowns, filings, etc. for all these years, this is something we appreciate more than I can say.

I worked more than usual this week, including 2 overnights for Michaela.  Rob also did 2 overnights for Jake.  I spent one night over at her house with Michaela as she doesn’t like to be away from home very much.  The other night was spent here.  Rob was in so much pain with the tooth issue, that I had to do quite a bit of the childcare, but he hung in there when I wasn’t there.  I also worked a tiny bit more as there were a couple of times that I needed to be over there (at their house) that I don’t usually need to be there.  It will make up for when I was sick at the beginning of the month.

I only needed fresh veggies, salad stuff, milk, etc. this week.  So, I did not buy more than that.  I have lots left for the week ahead.  We had leftovers, plus I cooked a cauliflower for our dinner tonight after we got back from the beach.  Although eating out was tempting, we didn’t do it this time.

It was a great week!