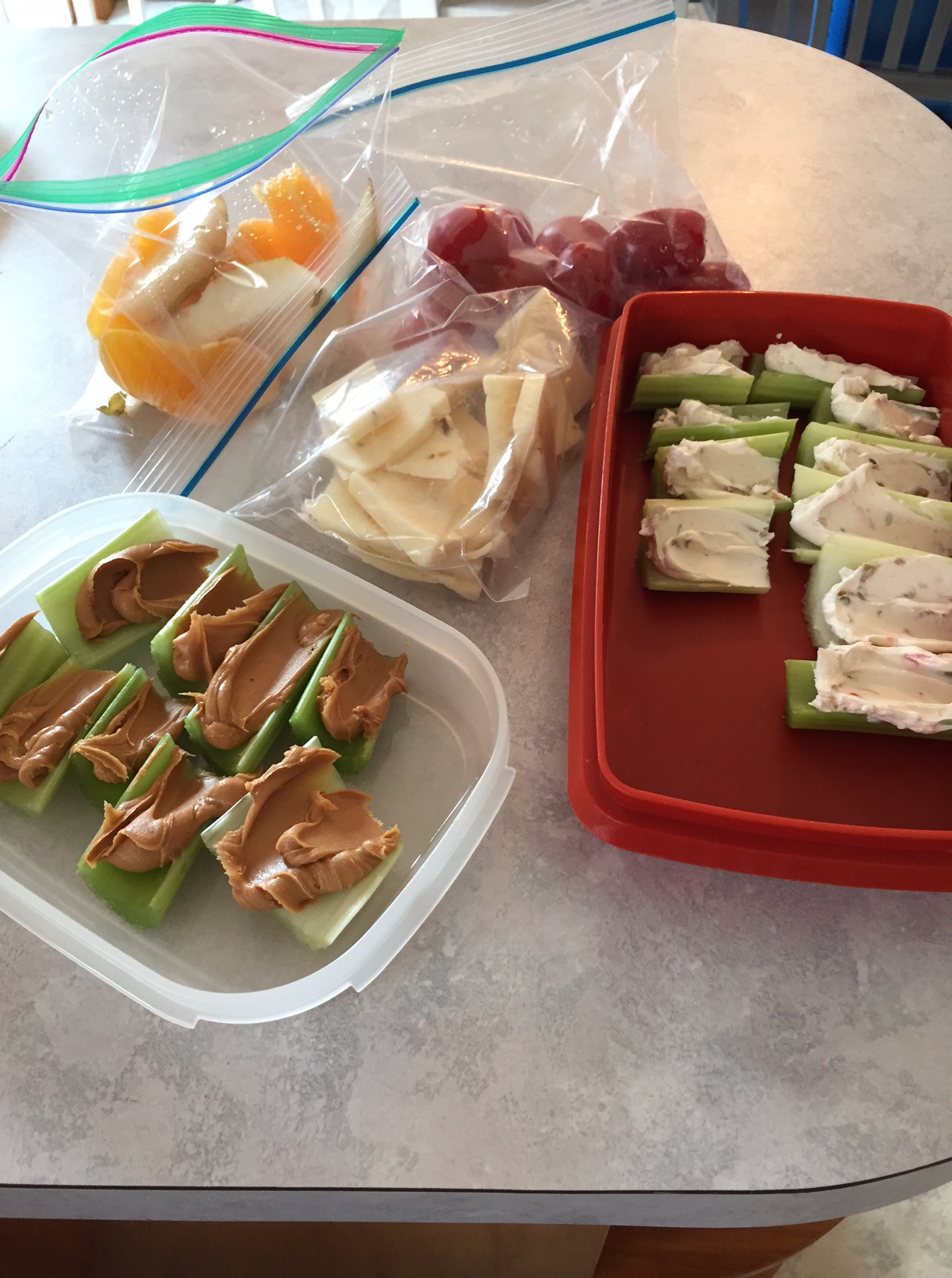 We packed “car picnics” several times.  I usually put several food items in the little cooler and put it between the 2 front seats of the van, when we are driving that, and just hand food around as we drive to our destination.  I can think of at least 4 times I did that during the past week alone, saving a minimum of $100 ($25 x 4), and that would be for fast food–not even a regular restaurant.  That could easily run $50 – $60 per time, bringing the savings up to over $200.

We drove the van a lot last week, as the little car was in the shop.  We drove up and got it back on Friday, and it has no more wobbly bearing in the right front side, brand new back brakes (I guess they were really awful–not safe anymore), and the transmission issues from before are all fixed (some cable needed tightening or something).  Also, it doesn’t sound like a ghost is howling in the engine any more.  I guess the alternator went out and the alternator clutch was burning cherry red inside–our good friend and mechanic, Bob, took a picture of it glowing.  I though that there was an awful, new noise that developed on the way to the shop, and I just kept driving and praying and being thankful that we were ON OUR WAY to the shop when it started.  I think that one of the nicest things is putting the car into the hands of one of Rob’s best friends and knowing that he was going to fix it, fix it well, fix everything that needs fixing and nothing more, and not over charge us.  In fact, many, many times in the past, he has vastly undercharged us.   We gratefully paid what he asked, and it wasn’t inexpensive, but I still think he gave us a really good deal this time as well because there were quite a few things that needed done.  I drive so much, I wear things out, so we prefer to get the cars maintained regularly. 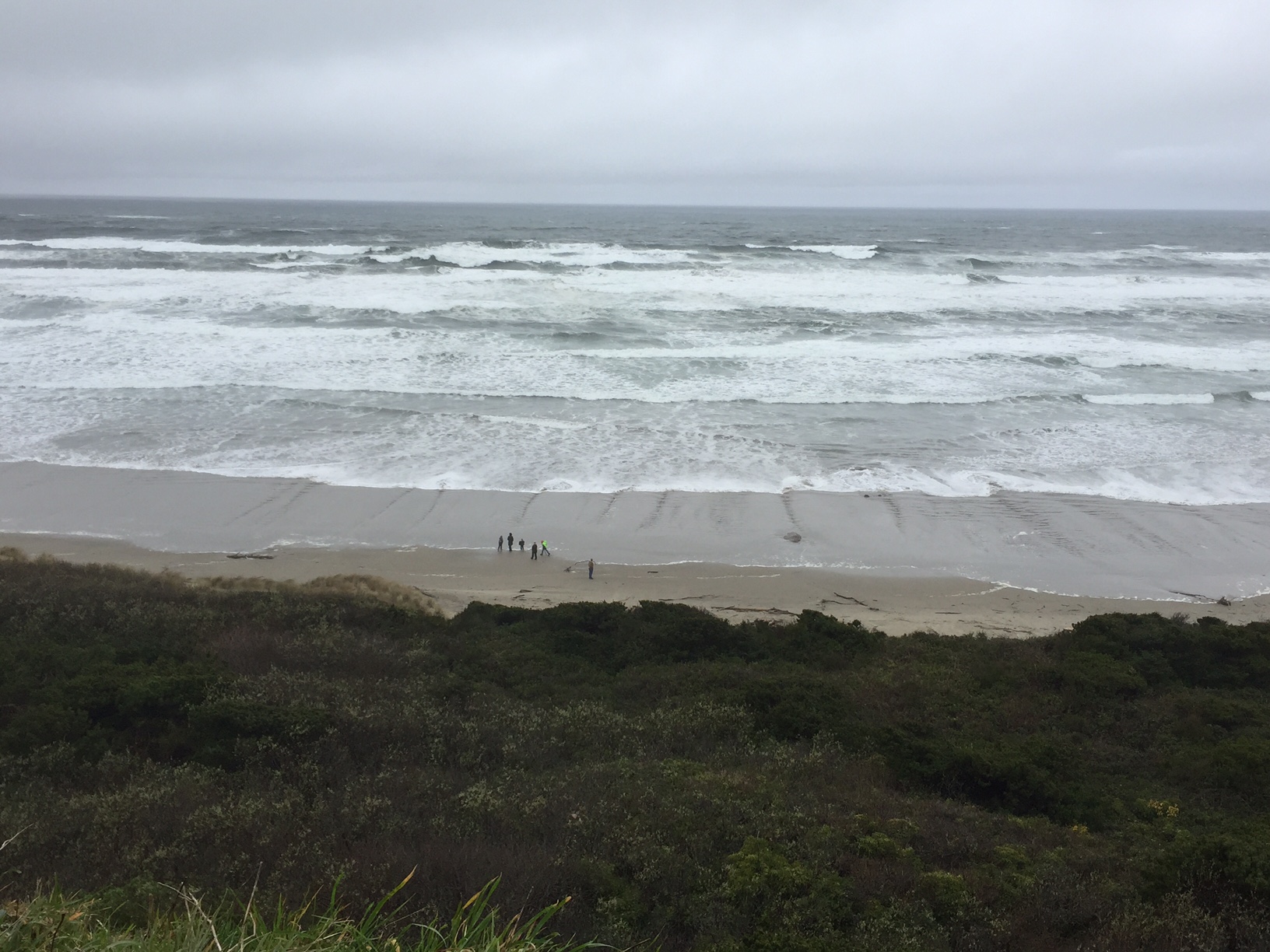 Rob hitched up the van to the trailer and we went down to the coast for a few days.  We decided to get away on a little vacation while he had the time off from work/school.  We used our park pass, so the campground was free, and I was far enough along on my “getting it ready” project that it wasn’t too much work.  I did find a few more things that I need to stock in there, though, so I’ll keep on with that project.  I loaded up a few freezer meals I had made a couple of weeks ago, some groceries and clothes, and we were off.    It was pouring rain, and many campsites were actually flooded and the people could not build a fire if they wanted to because their fire pits were under water. Ours wasn’t, but things were super muddy. We were fine with that.  We have a cozy camper.  I was so tired, I slept a ton, read several library books, watched multiple movies, etc.  I did not even go down to the beach.  We took the girls to the outlet mall and we all picked up a few sale clothing items (except Rob, because they took the only big and tall shop out of there, poor Rob).  We ate out a couple of times, but mainly ate simple meals from the camper.  We only roasted hot dogs and marshmallows once, when the weather cleared off a bit.  We bought seafood in a store and cooked it one evening, since we were at the beach, after all, and Rob’s 2 fishing expeditions were not successful.  He pulled up a few crabs on his crab fishing pole, but they were females. 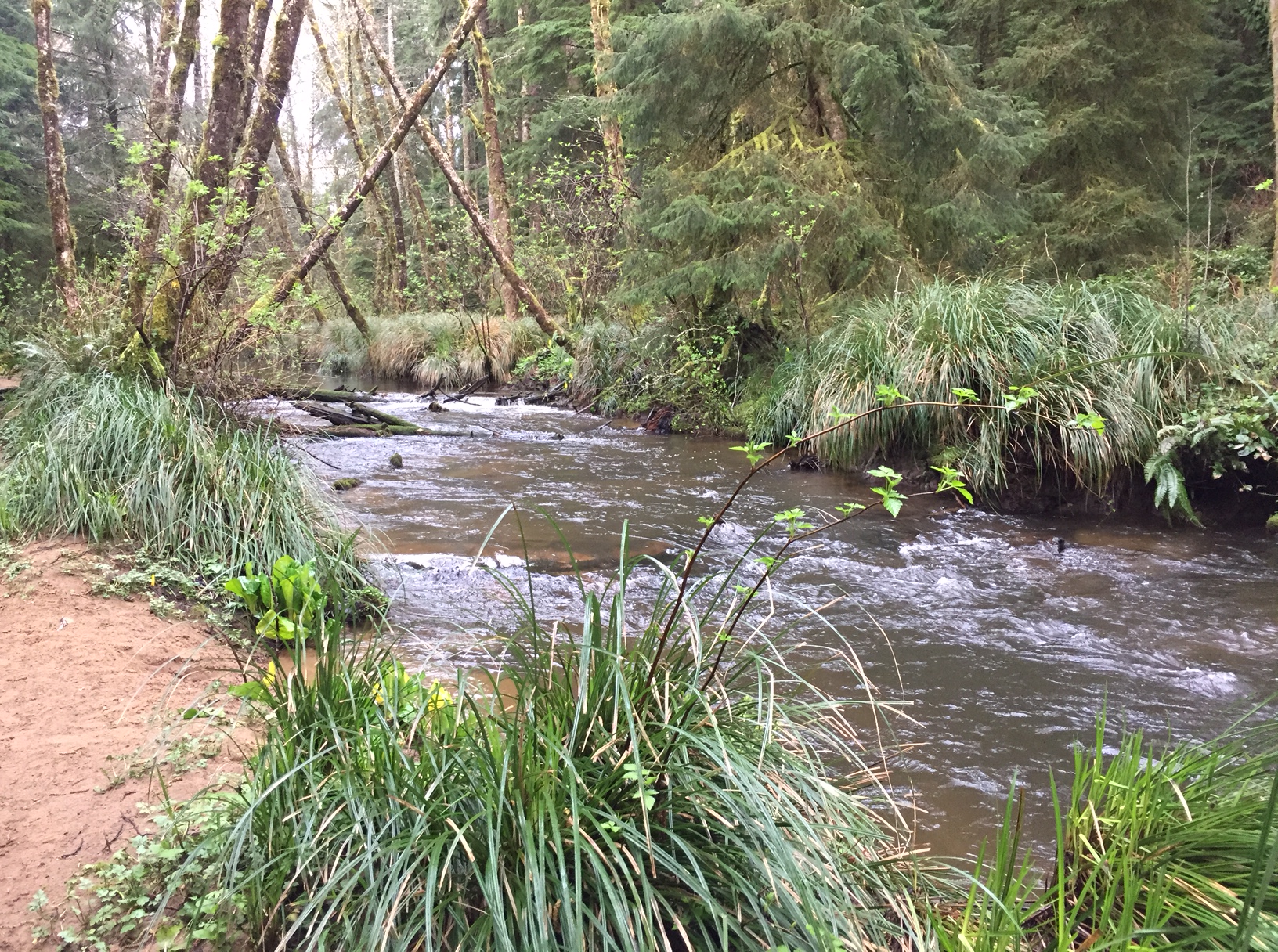 Patsy and I did take one short hike during one clear evening.  There is a trail in the campground we were in. 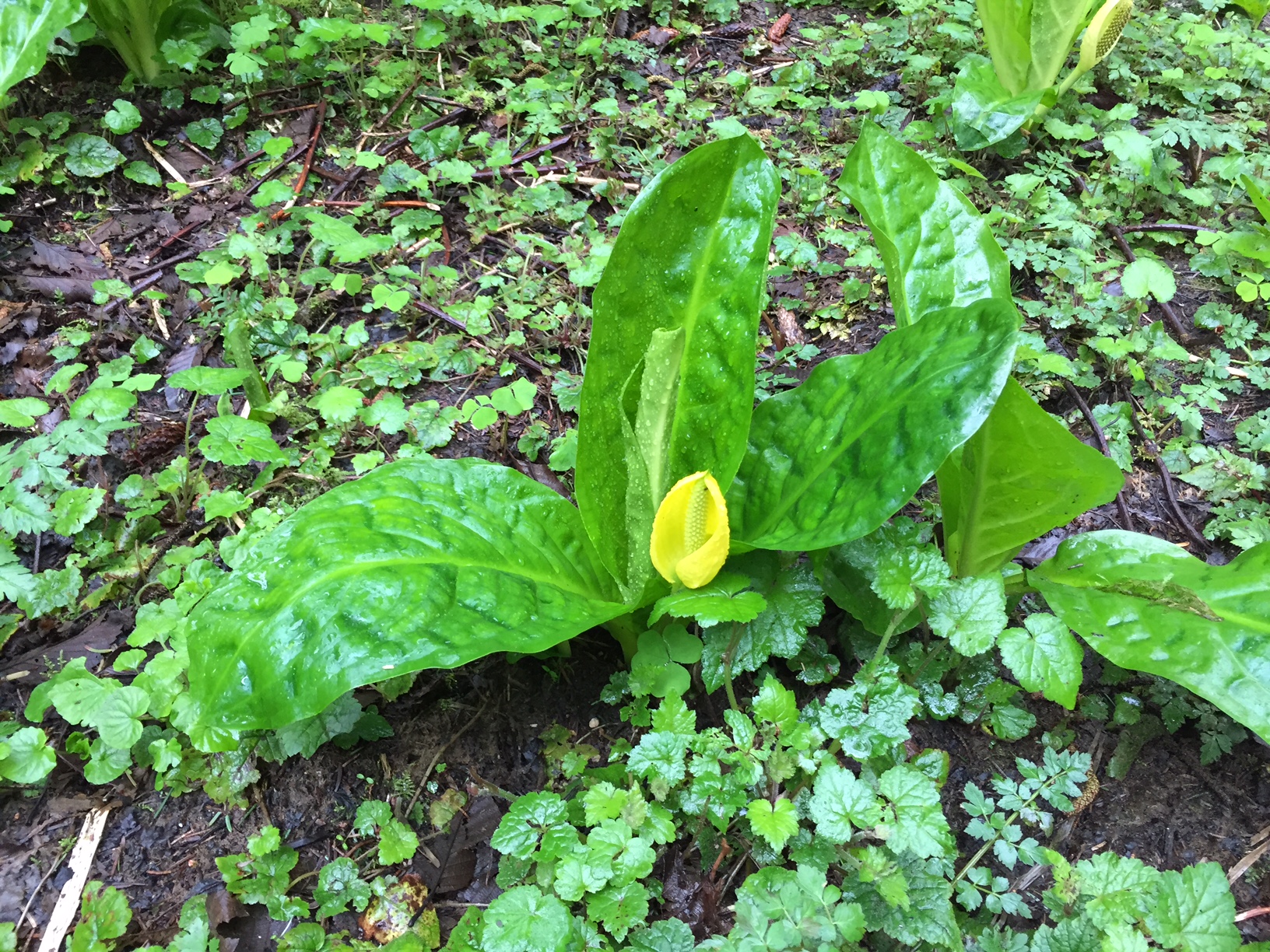 We enjoyed the flowers and stream we hiked along.

My aunt gave us some food before she left for her vacation– including a few eggs, celery,  and baby carrots.  We ate them on our picnics, and I hardboiled the eggs and we ate egg salad sandwiches, egg salad and plain eggs dipped in salt and pepper for a couple of days. 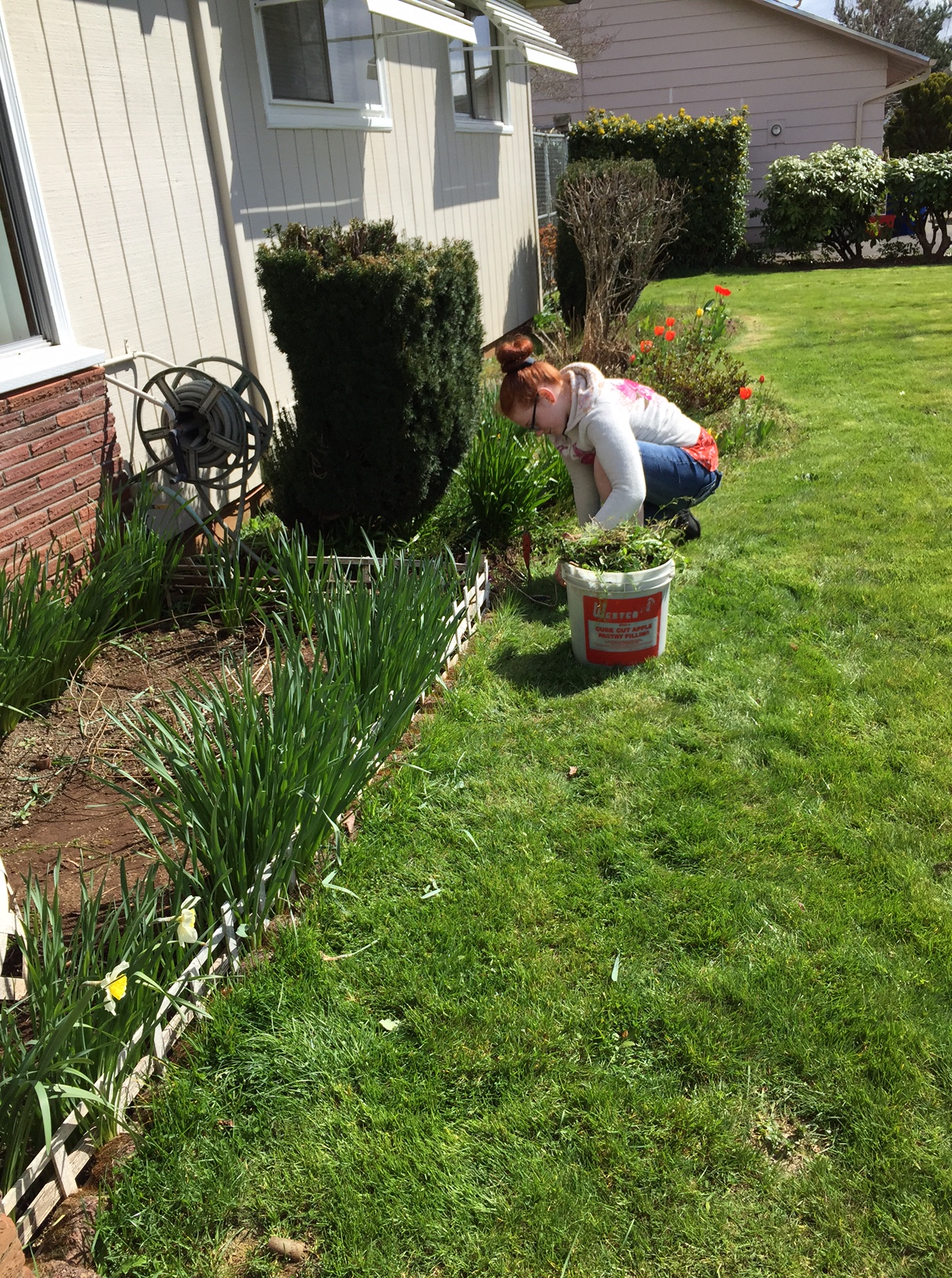 We finally got a couple of sunny days.  Patsy and I worked in the yard for several hours.  We transplanted some daffodils from this flowerbed to the front.  We planted some dahlias my sister gave me in the section to the left of the little white fence, and a few out front.  We have hours and hours of yard work left to do, but it was good to get started.

Rob went and got our tillers from my sister’s farm where they were stored.  He did one trial strip in the garden and feels he can get into it before long, if it stays dry for a few days.  Then, I can plant cool-weather veggies.

I was happy to spend so much time with Rob during the week, and really glad to get caught up on my sleep.  I was able to get organized a bit for the week ahead, so I’m ready to go–back on my busy schedule!