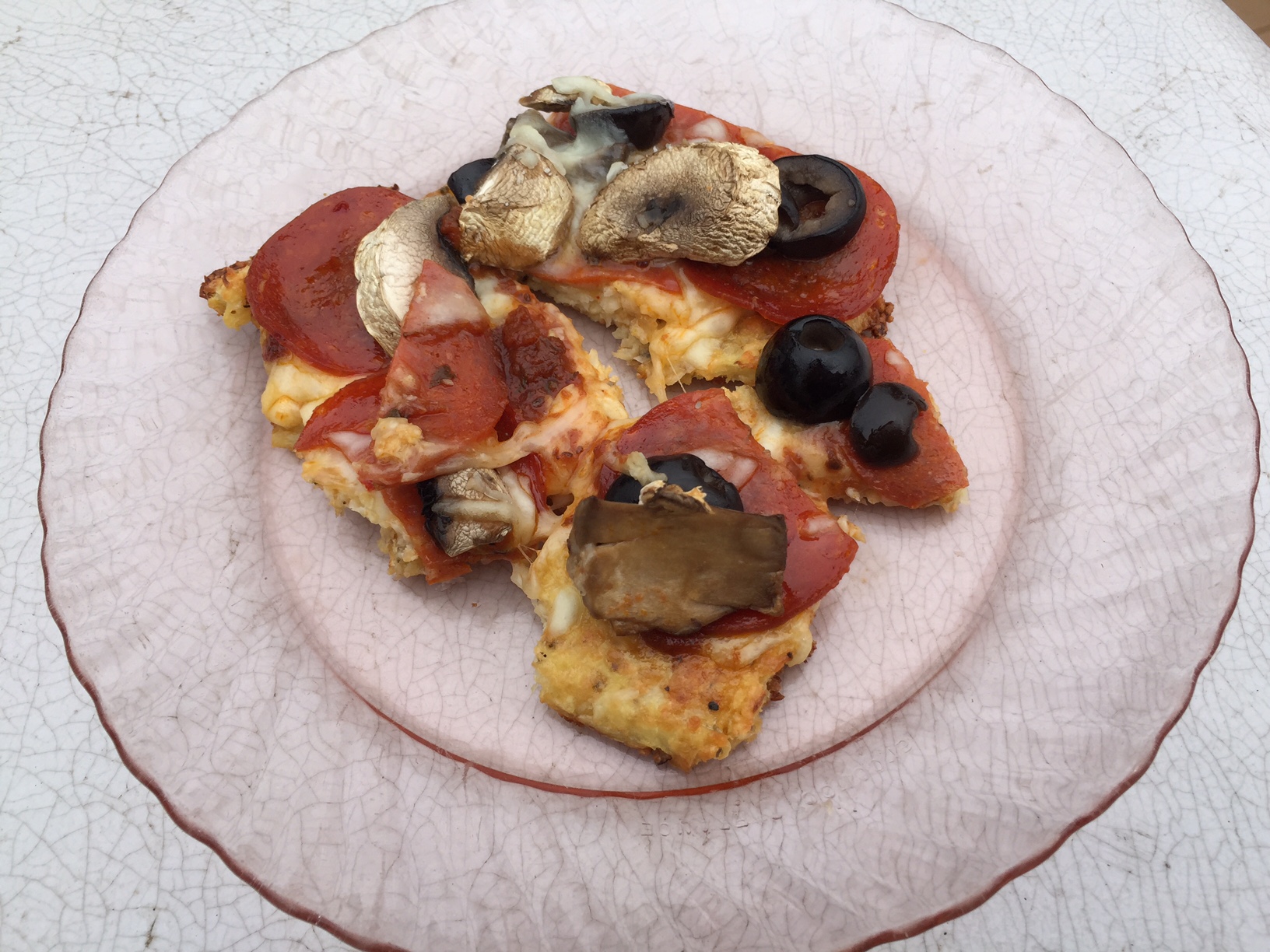 Last month, I did a challenge where I used a lot of pantry ingredients and kept the budget low.  I was very pleased with the March 2017 results.  I used up a lot of items that really needed to be used.  I saved 1/2 of the $200 I had set aside, and saved more than that, since I usually spend more than that in a month on groceries.

I went shopping at Costco, Fred Meyers, Grocery Outlet, Natural Grocers, and a couple of other stores.  I bought sale items, such as 99c/ 1/2 gallon milk, bulk items such as 5 dozen eggs and a 4-pack of butter, non food items like kitchen garbage bags, big black garbage bags, vitamins, Tumeric, lots of produce, and more.  I worked hard to get the best deals possible from many sources.  Now, I’m stocked back up on both food items and other supplies.

This month, I decided to work on my health.  As readers of this blog know, I’ve had diabetes for a long time.  I was counting up the years, and realized that it’s been 15 years now since I was diagnosed.  So,  in honor of that anniversary, I decided to focus on finding a few more low-carb recipes this month to encourage myself to keep eating in a way that is interesting and healthy for me.  All those potatoes were great for the budget, but I need to eat only a few of them.  I’m well-stocked for groceries for the month after my shopping trips, and will just buy produce, things I run out of, etc. for the rest of April.  I will also keep eating from my freezers, shelves, etc.

I read several recipes for cauliflower crust pizza.  I combined them and came up with something that I liked.  Here’s what I did: 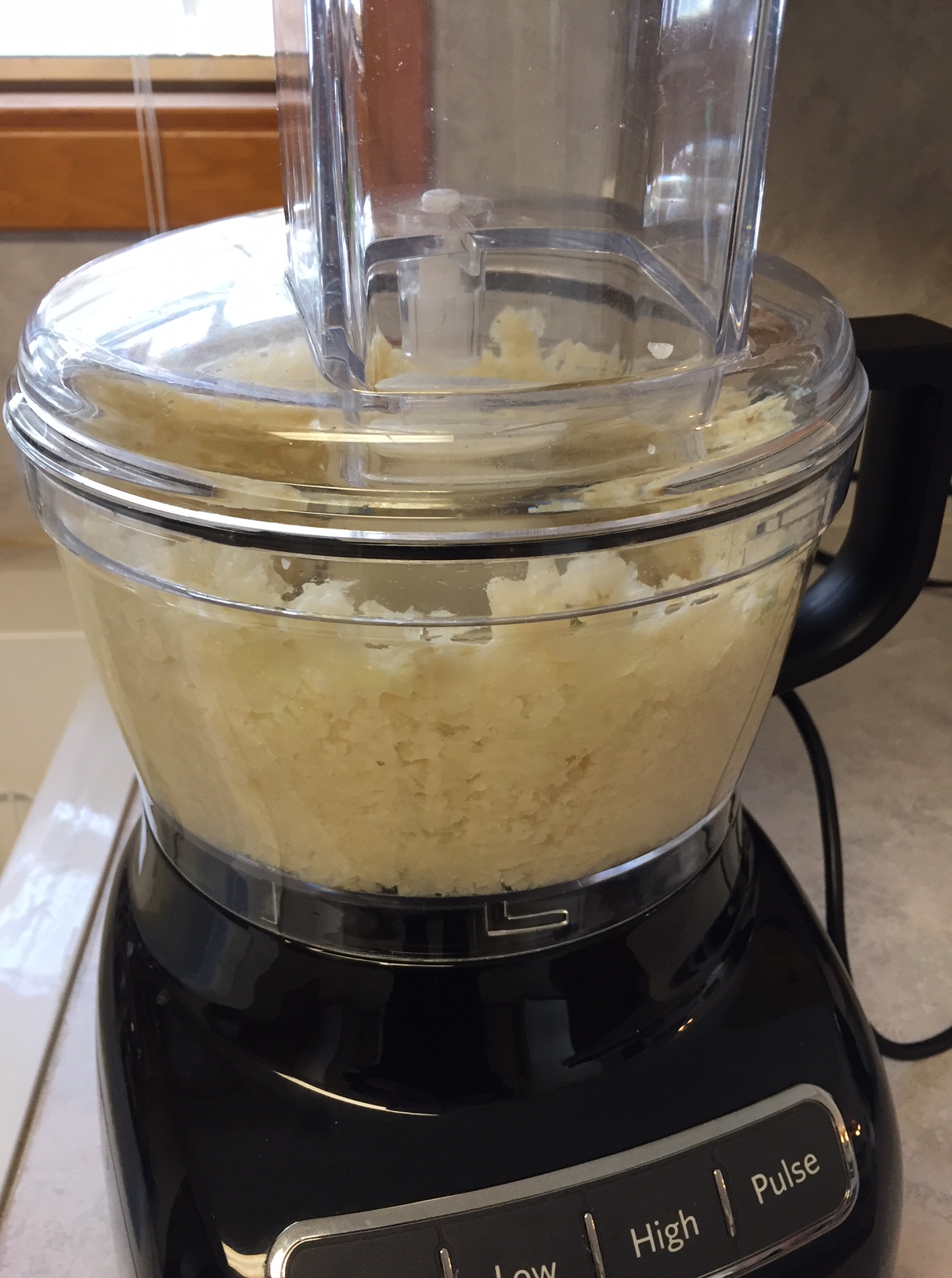 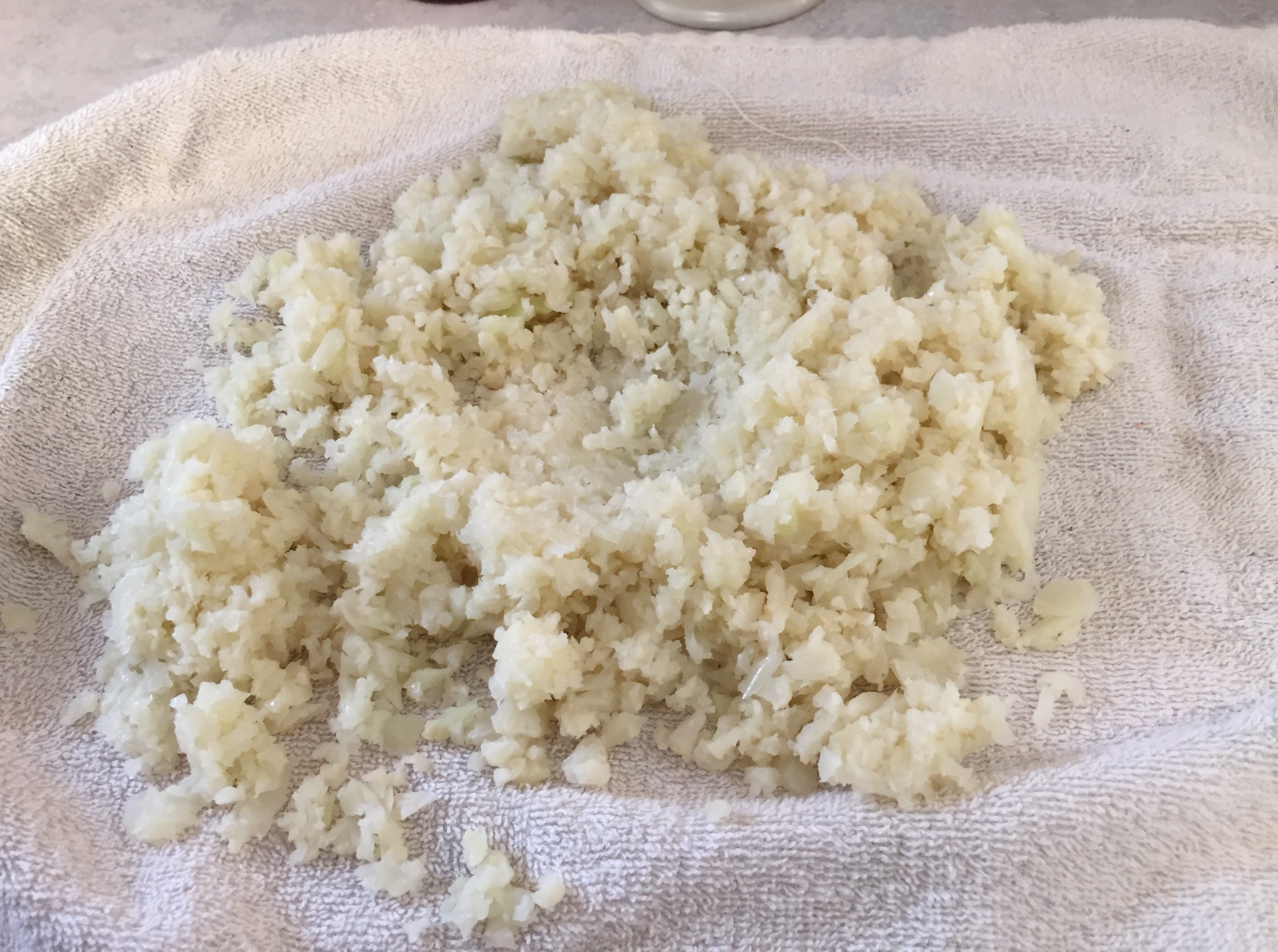 Following the instructions from a couple of sources, I put the pulsed pieces onto a clean, thin towel and squeezed the water out of it.  It was pretty dry. 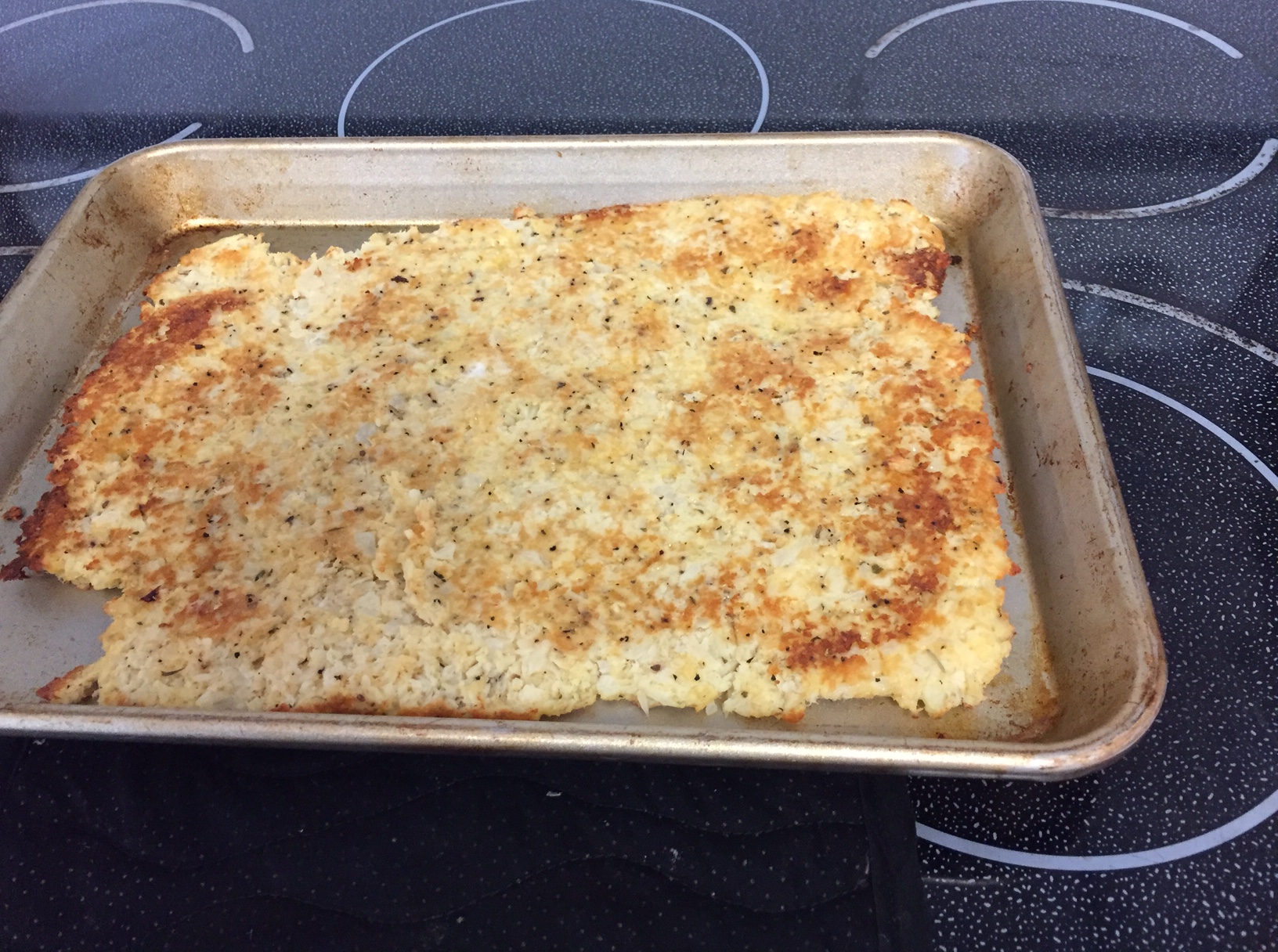 salt and pepper (a little of each)

I put foil on a small cookie sheet, sprayed it with non-stick spray and spread the mixture on it.  I baked in a 400 degree oven for 20 minutes.  Then, I turned it over and cooked for another 10 minutes.  I had trouble getting it off the foil so I could flip it, but finally did.  Every source recommended parchment paper, but I did not have any.  So, I might get some and try that another time. 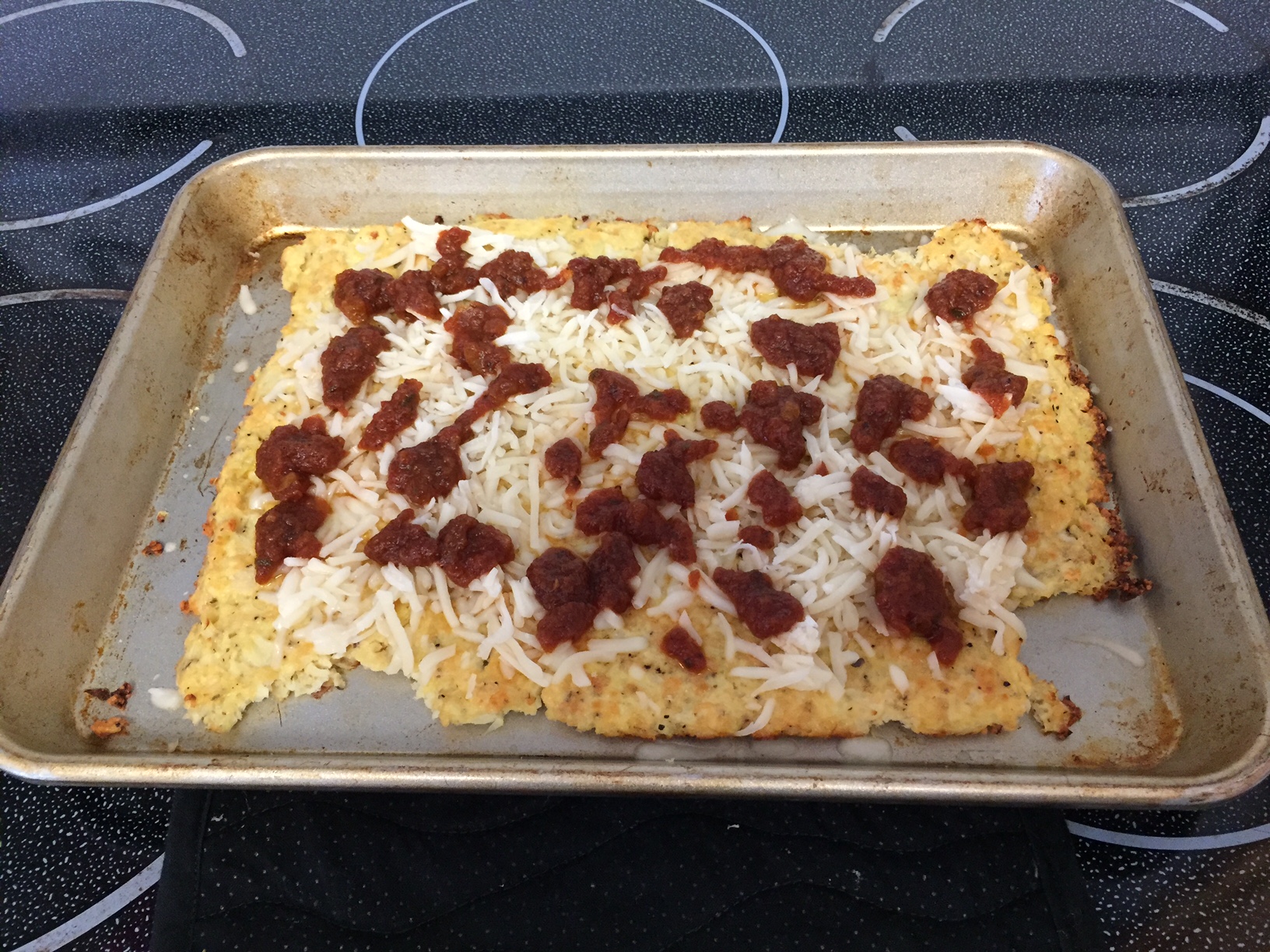 One source said put cheese on first to keep it from getting soggy, so I did, then spooned sauce sparingly on top.   I want more sauce next time.  Hopefully, it won’t make it soggy. Then, I put pepperoni, olives, mushrooms and a little more cheese on top, and baked for another 10 minutes.

I really liked it. I could pick it up with my hands and eat it.  It was really tasty and good.  It was very low carb.  In fact, there were not enough carbs in it to hold me over to dinner.  That’s a good thing.  I love snacks.  In fact, I went so low (blood sugars), I got to eat chocolate chips.  Double good.  I’m pleased.  Next time, I’ll just eat a few more carbs with it and it will be a good choice for me.  The kids love those $5 pizzas from Little Caesar’s and this will be a good choice for me on the days they want one of those and can talk their daddy into getting them one:)

I’m going to try it again.  I will use less salt than I did this time (I used about 1/2-1 teaspoon).  It was pretty salty.  I may also try it with 1/2 cup mozzarella cheese instead of the parmesan, or only use 1/2 cup of parmesan.  The crust tasted strongly of parmesan, which I enjoyed.  If I wanted a milder flavor, though, I might enjoy mozzarella and Canadian bacon and pineapple.  I have quite a few baggies of frozen cauliflower left from when I froze so much last year.  I am looking forward to using some of it this way.