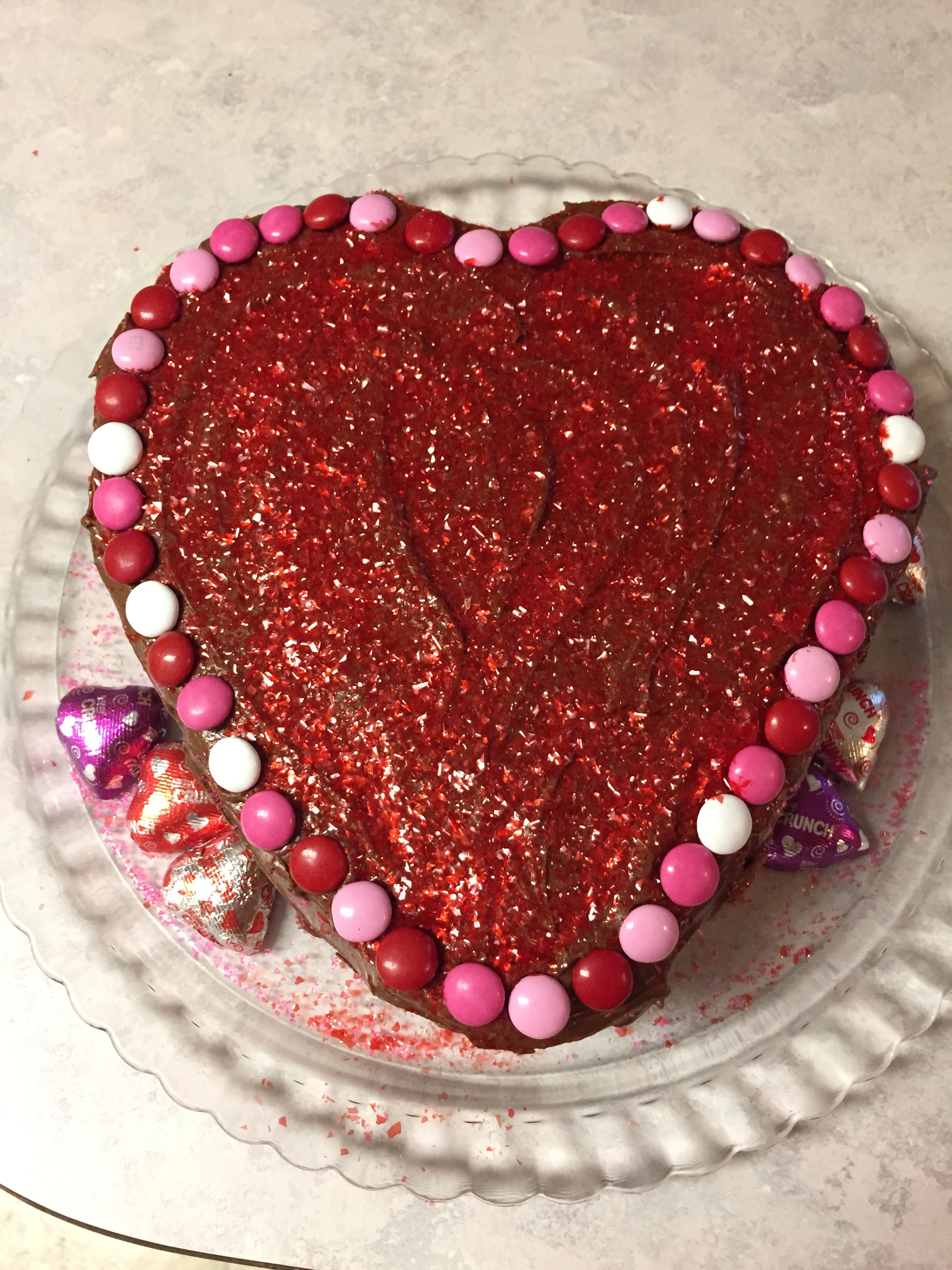 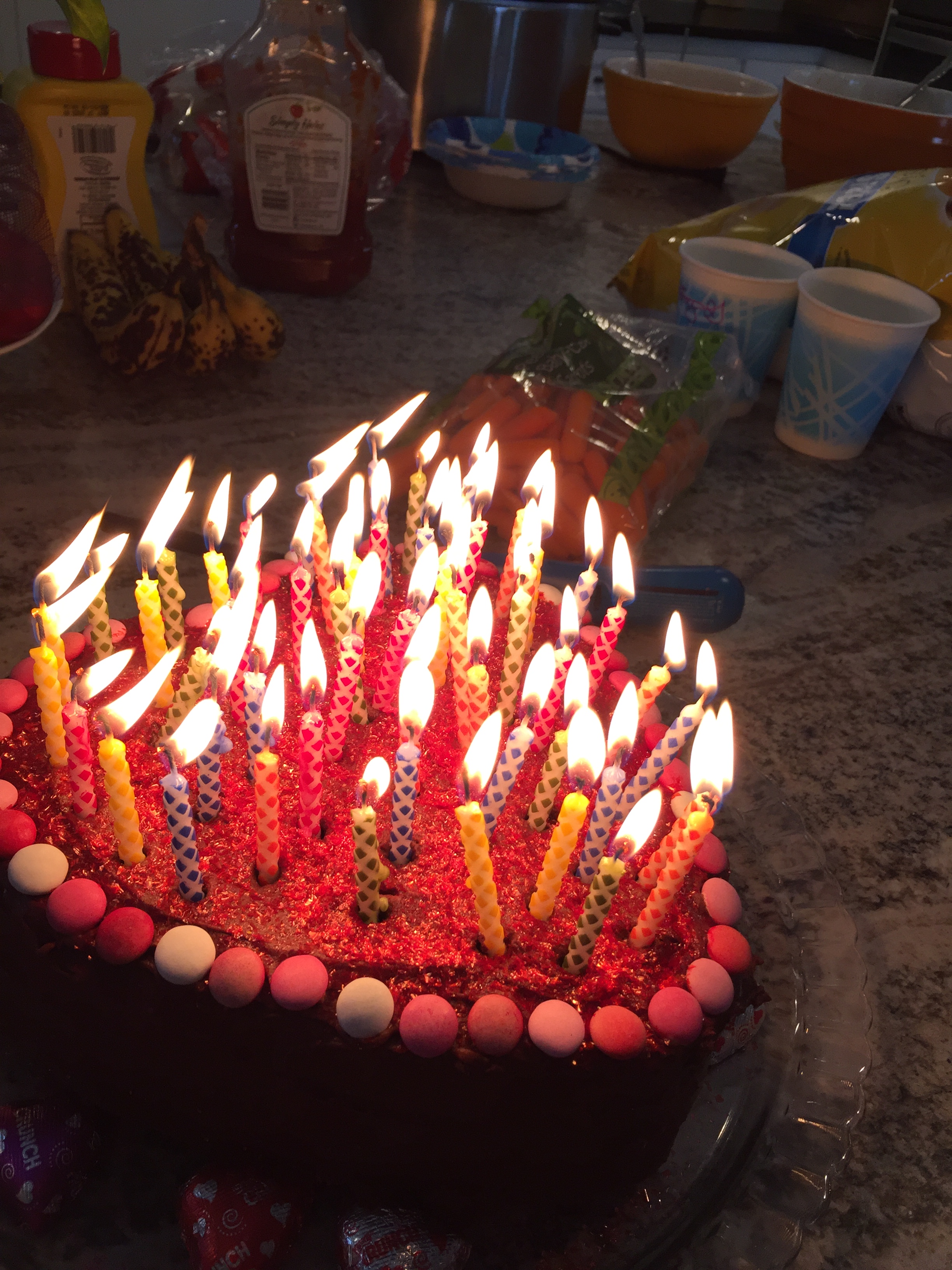 It’s that time again–my sister’s birthday and Valentine’s Day.  So, I made a cake that will celebrate both.  It’s chocolate, festive, and most importantly, gluten-free!  I couldn’t wait to eat it today at Family Sunday Dinner.  Lovana insisted on counting out the candles to the exact number for this birthday and putting them all on the cake!  Pretty scary when you consider she is my LITTLE sister!!!!!  We also had a wonderful time with my niece, Rachel, who has now returned from her year in Ireland.  It was so good to see her again. I used the flowers I was given, plus a few more to brighten up the flowerbed by the front porch.  I also have little tiny early daffodils blooming.  It’s been very spring-like around here!  The daffodils Patsy planted when we first moved here are sending up buds.  We will get more blooms this year than we did last year, and each year they should continue to multiply.  Since they were all extras from my sister’s flowerbeds, we are going to get a lot of beauty for free for many years. I froze bananas.  They were 39c/lb.  We drop them into smoothies, still frozen, to make the smoothies icy and thick.

I did some shopping and got my free items from Fred Meyers.  I picked up my sports water and candy hearts.  They were out of the foil cookie pans.  I got some great bargains they had as well, including $1.99/lb butter (5 boxes), 99c peanut butter (5 containers), and some other things.  I didn’t buy many groceries to use for meals this week, as I am still well-stocked, but mostly concentrated on pantry-building items.  Pantry-building is important to me, as I like to buy everything at the lowest possible price, and then, hopefully, not run out until the price drops again.  I also grabbed candy for the cake and Valentine’s Day.

We ate lots of chili leftover from last weekend, sandwiches, leftover chicken and steak from last weekend, baked potatoes several times, and used some frozen salmon twice.  We also had Eritrean food that my friend, Harnet, made and brought to my house.  There was also a jumbo package of turkey dogs in the fridge and many were consumed.  Now, the fridge is finally empty from the Super Bowl leftovers and I can think about making some new items for the week ahead. 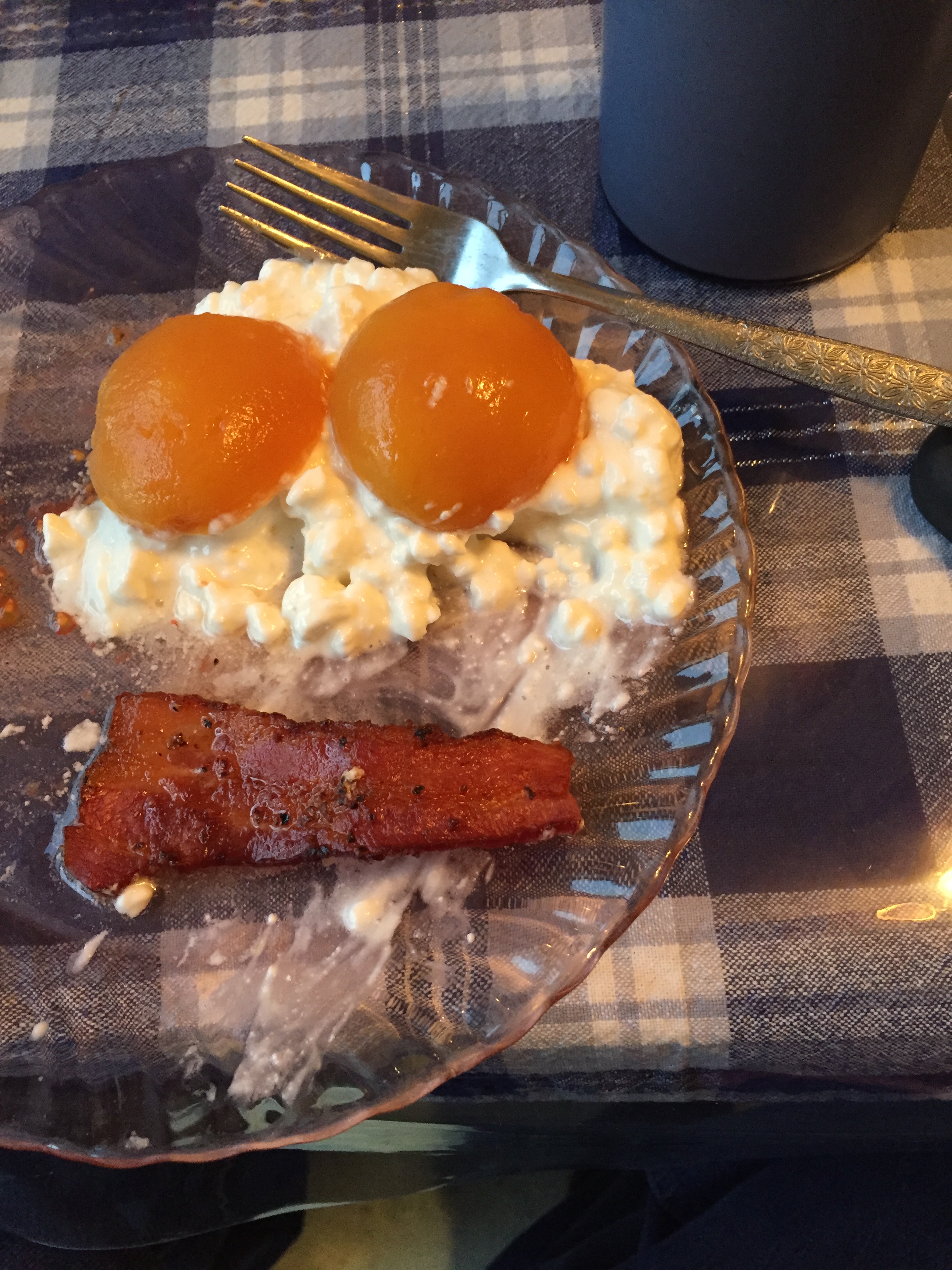 Rob noticed his breakfast looked happy (?) one morning.  I think it looked scary:). Either way, home-canned peaches, cottage cheese and bacon made a great breakfast for him before a long day at school.  Bacon has been very reasonable at Safeway the last couple of weeks.  That was another item I “pantry-stocked.”  The bacon was around $3/lb, in a 3-lb package.  So, I divided it up into meal-sized portions and froze most of them.  It’s often more than $3 for 12 oz packages, so that was a stock-up price for me.  When Jake spends the night…..it’s bacon, bacon, bacon!  He loves it!! I’m glad to have a bunch in the freezer now. 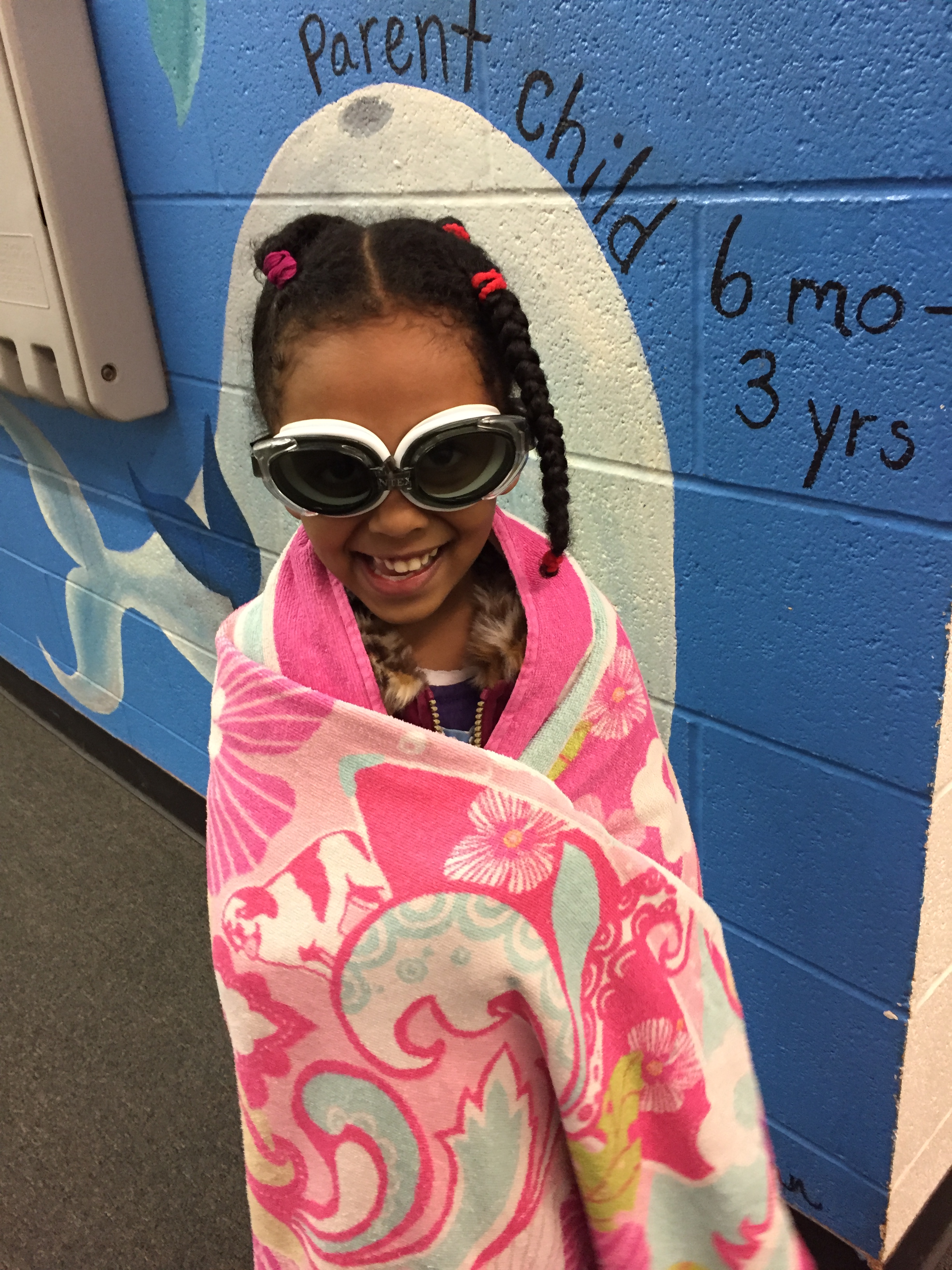 I took Danait, Harnet, and Patsy swimming at the YMCA.  She had a blast.  So did her mama.  Patsy always does.  She loves the pool.  I continued doing my Pilates class. It is each Tuesday and Thursday.  I still stink at it, but the teacher says I’m getting stronger, so that’s good. 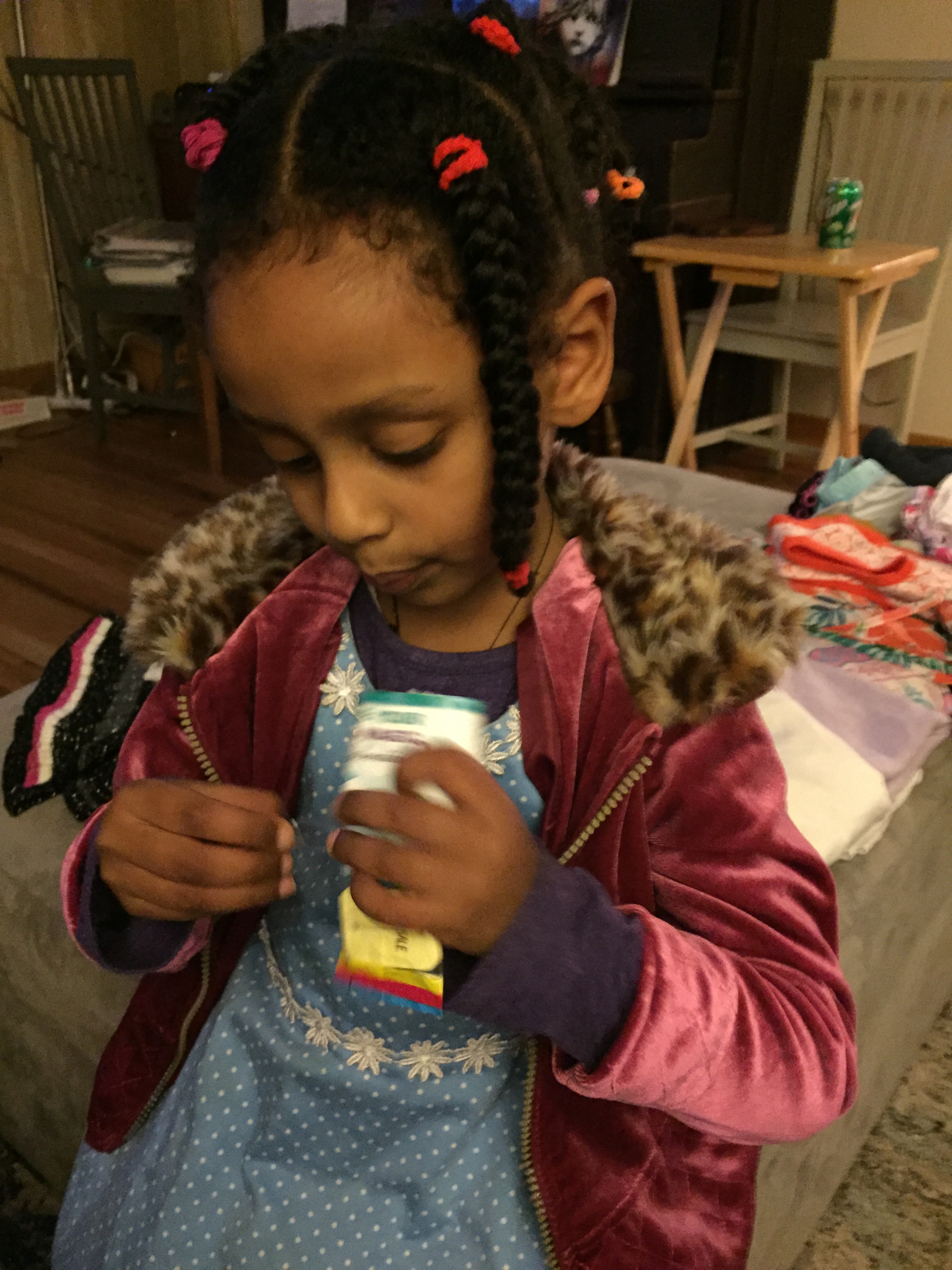 Danait has decided that Rob is her uncle. After all, if he’s Jake’s uncle……. How sweet.  So, Uncle Rob took her and Patsy down to the Dollar Store, and she chose Valentines for her class at preschool and Patsy chose some for her friends.  He also got some candy, and she had a busy time taping the candy to the little cards.  Her mama and I helped write her name on the cards, and taped some chocolate to the ones for the teachers.  We got a lot of bang out of our buck there….she worked on them for at least an hour:). During this time, we had the Olympics on, and I thoroughly enjoyed watching what I could between the commotion.  I’ve always loved the Olympics, especially the ice skating, and I was lucky enough that there was some on.  I was even happier to figure out how to record the rest of it when the hour grew quite late, and it was still going on.  I’ll find out tonight if I did it right!!! Here’s hoping:)

I downloaded and read a book for free on my Kindle, using the Prime Kindle Lending Library.  I had forgotten I can have one free book each month using that benefit of Prime.

I continued reading Little House on the Prairie to my nephew and played many, many games of Yahtzee with my niece.  When Harnet was visiting, we all 3 played.  We also played with a friend of Michaela’s on Monday, when he and his mom came to visit.  He hadn’t played before, and Harnet is new to Yahtzee as well.  It is good for Michaela to be the teacher occasionally.  She loved it both times! We also enjoyed some time at a park, with Danait and Patsy.  While they were playing, we finished up the last of Harnet’s homework for the weekend, so she could rest for the remaining part of the weekend, if you call doing laundry, taking care of Danait and cooking resting:).  The weather has just been so nice!