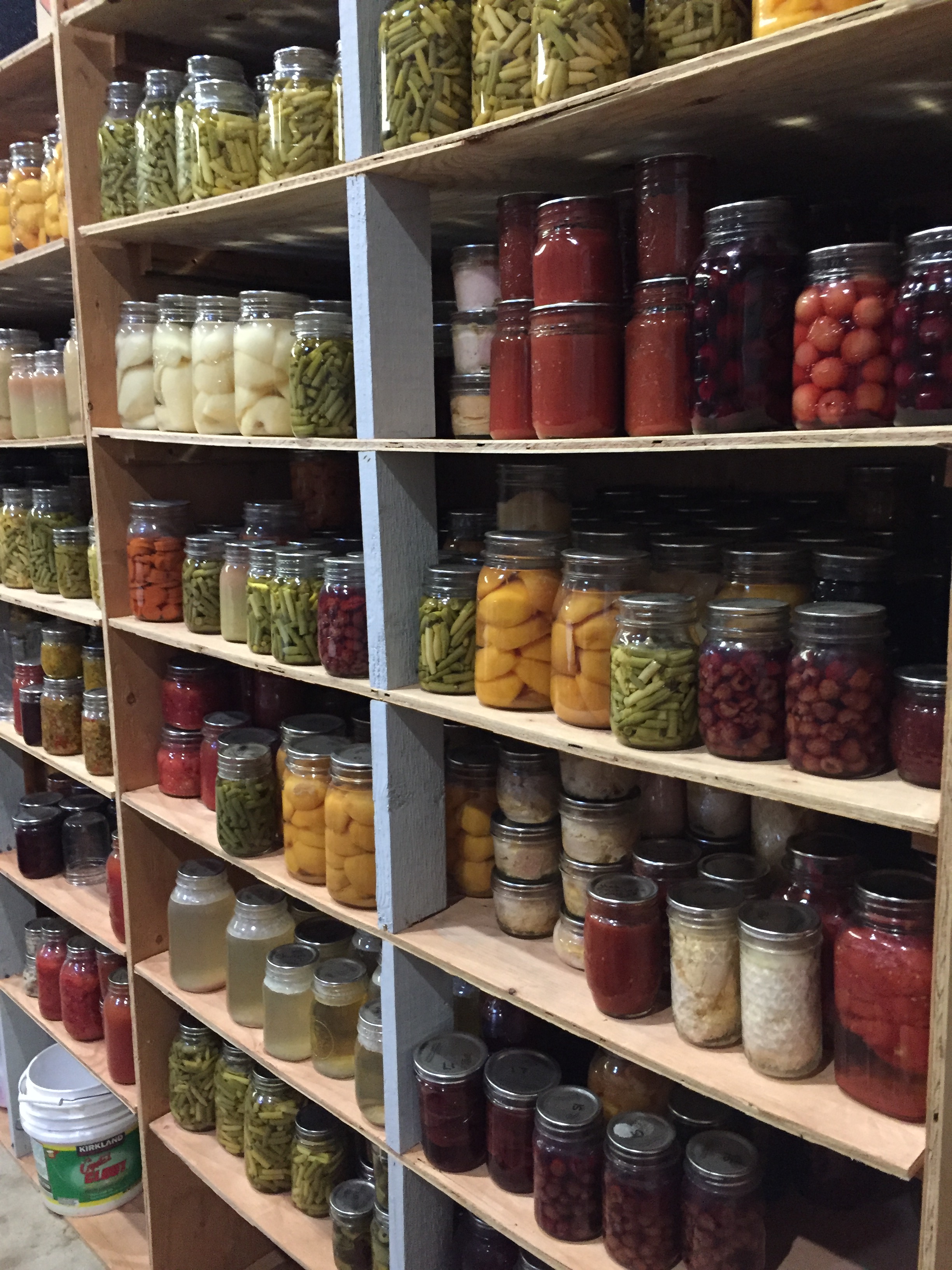 This is one of my favorite times of the year.  The canning cupboard is getting full, the garden is winding down but still producing, and the weather is cooling down.  There is still more preserving to do, but a lot has been accomplished.  It won’t be long until I turn my energy to other projects, like cleaning!  There are some areas in the house that have been neglected, for sure:) 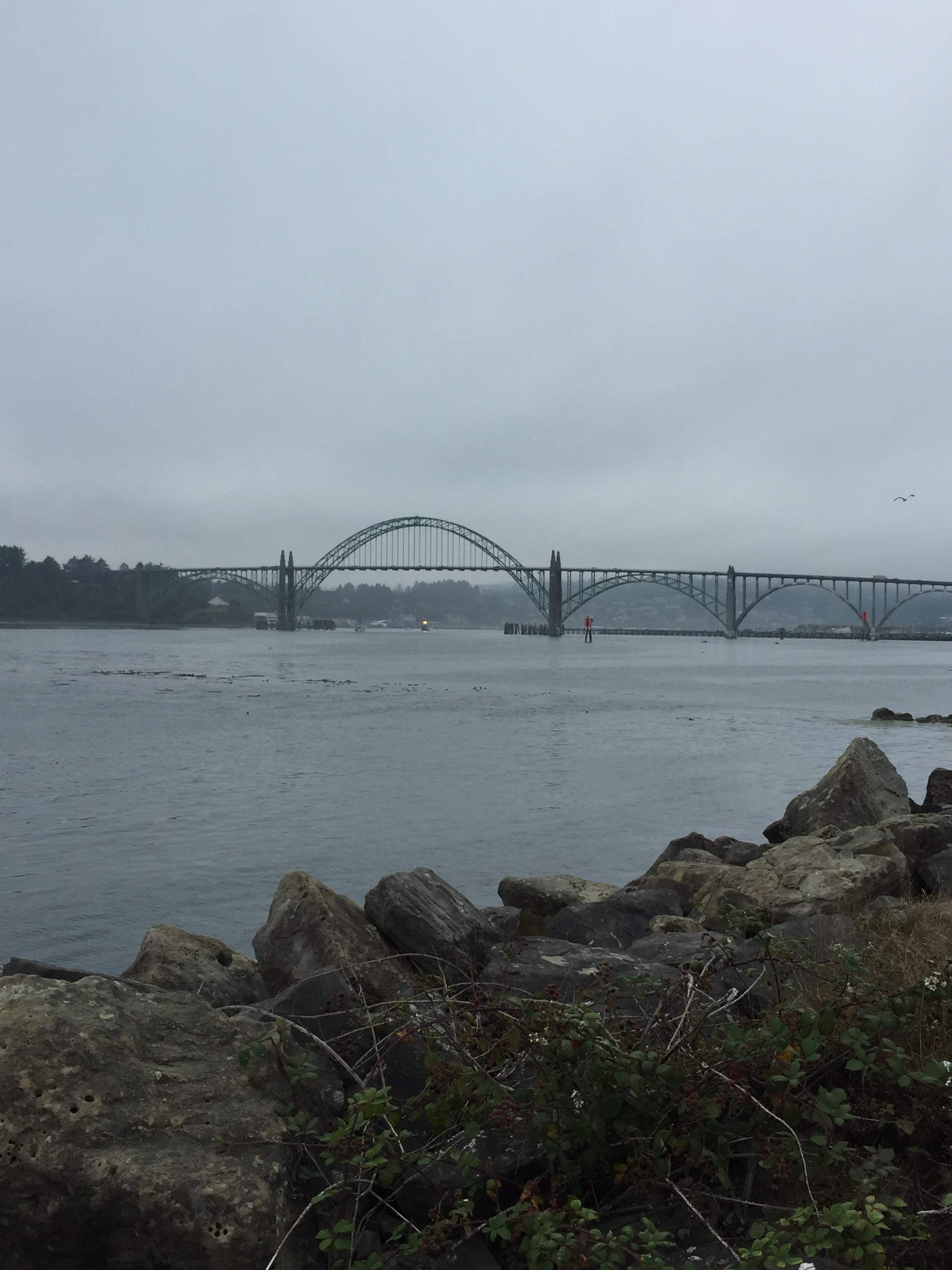 We spent a few deliciously cool days down at the beach, camping.  While we were there we went crabbing, clamming and fishing.  Since we already had our licenses, were able to camp for free using our park pass, and took our food with us, we spent very little extra money.  It was very restful, which is good, because we hit the ground running once we returned home. 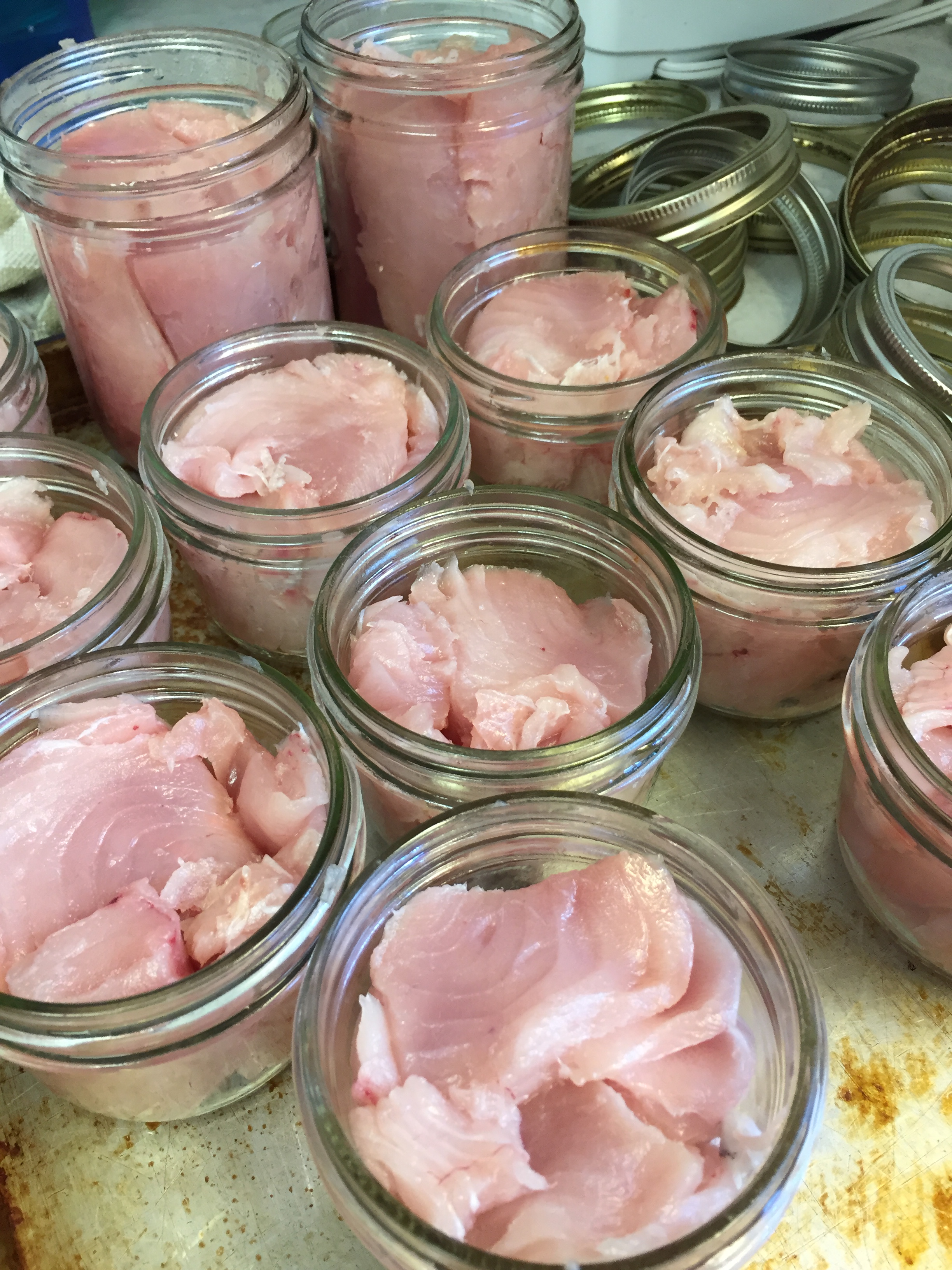 We purchased albacore tuna from off the docks and canned it once we got home.  We got 40 assorted jars, mostly 1/2 pints.  We caught both crab and clams.  I made clam chowder, ate crab, and froze the rest.  There is just a little bit of each in the freezer, and I need to use them quickly, as they don’ t last very long. 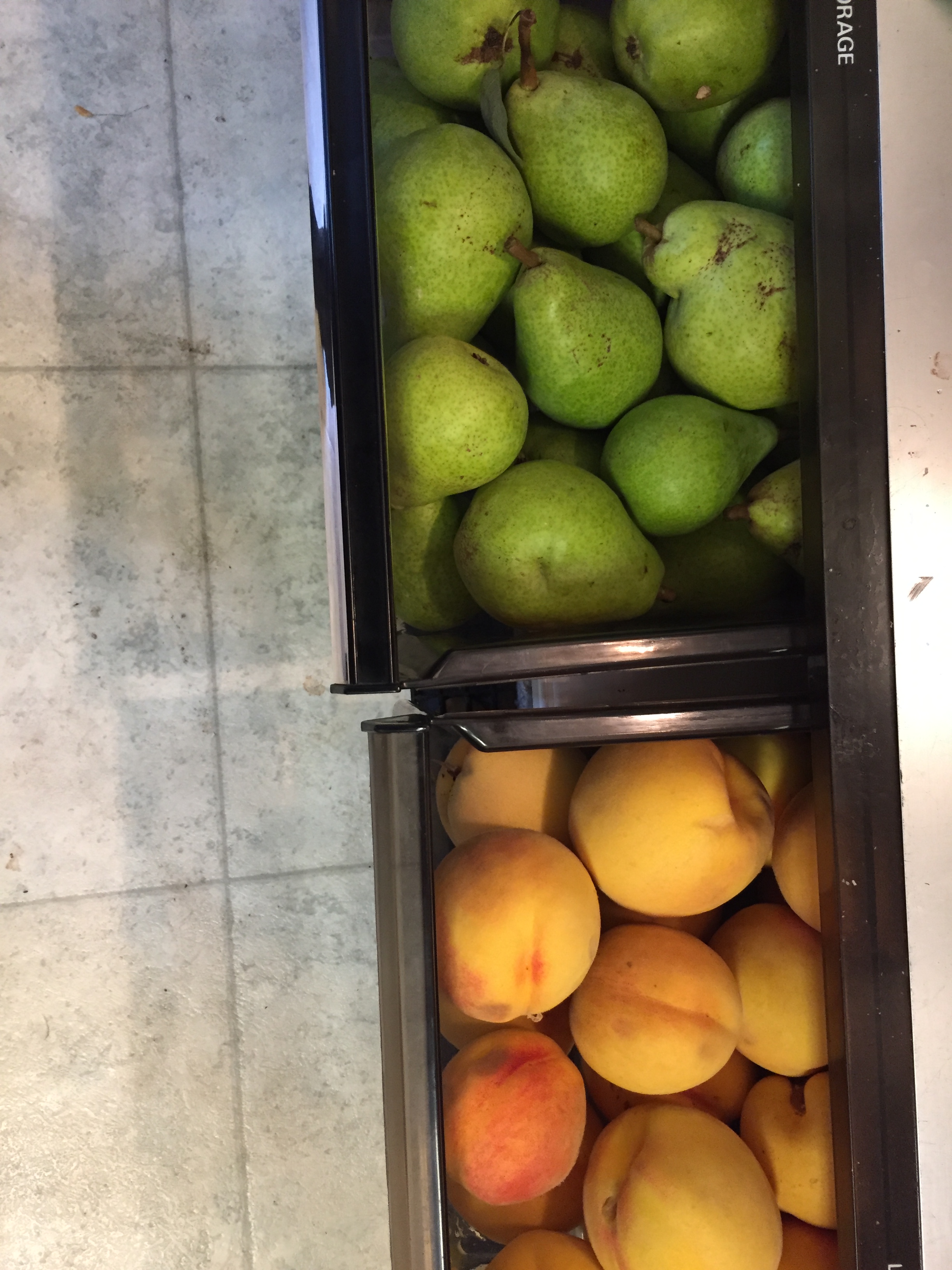 Before we left, I picked peaches at my sister’s and she gave me some pears.  I put them in the drawers in the fridge, and they lasted just fine until I got home. 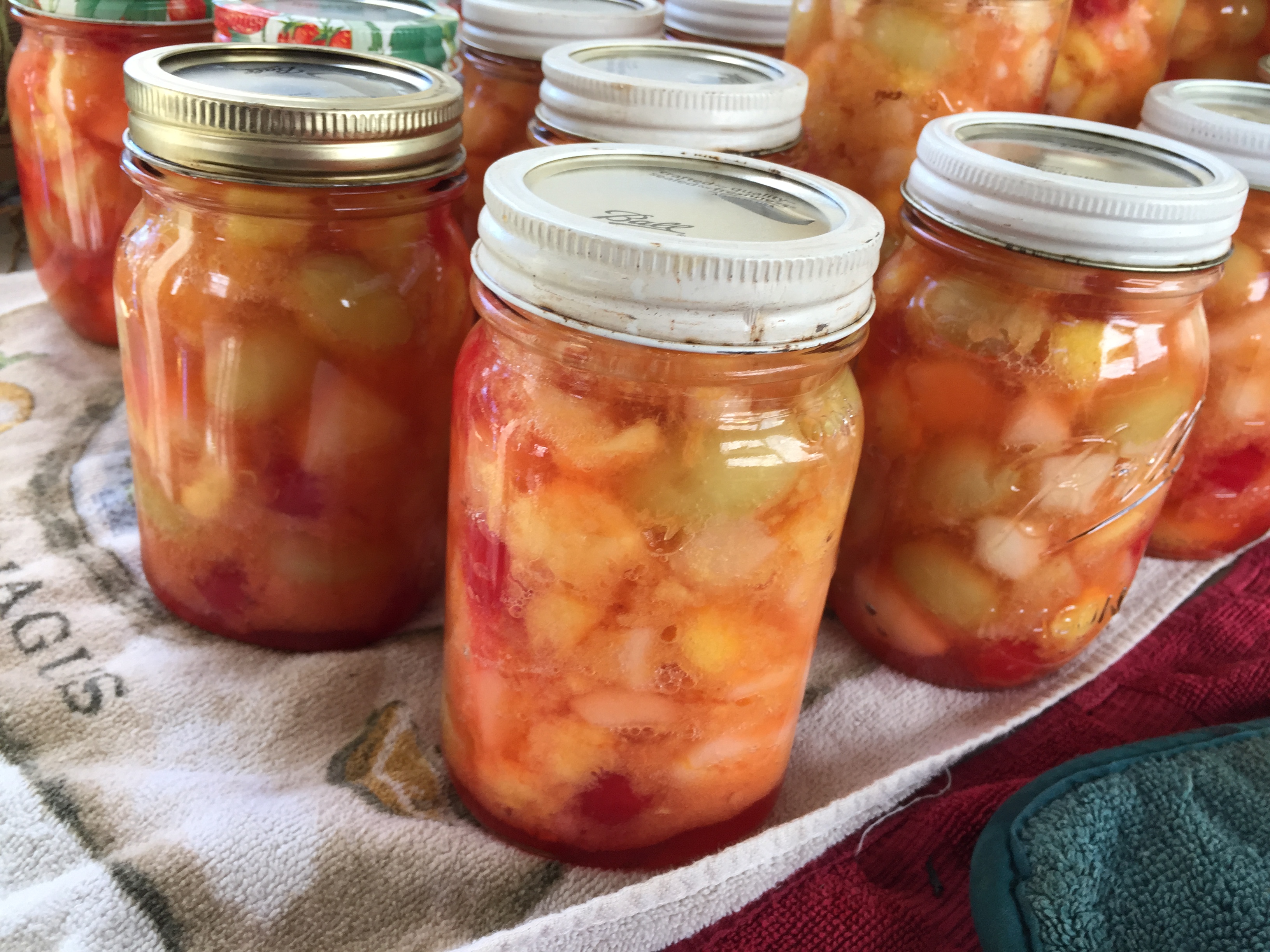 I bought grapes for 99c/lb at the beach and brought them home, since they would have been off that great sale price once I got back.  Marachino cherries were purchased before we left, in a big container at Cash and Carry.  They are much more reasonable that way.   I was all set to make fruit cocktail once I got home.  I also made crushed tomatoes from the ones that had ripened while I was away.

Not long ago, my rickety pear tree in the back yard just fell over one Sunday afternoon.   I was able to pick a few now-ripened pears from it where it lay, and use them in the fruit cocktail.  I cut a bunch of branches off, and will put them in the weed bin once it has been emptied.  It is full now.  The tree is being removed little by little, and then Rob will chain-saw up the trunk for firewood. Ironically, we have not harvested good pears from that old tree until now:)

I also got one load of beef broth canned.  There were two packages of soup bones in the freezer that I wanted to put into a more usable form.  I still have some broth and all the bits of meat to deal with in the next couple of days.  In the next couple of months, our beef farmer will be calling to let us know that our 1/4 beef is ready.  We need to make room in the freezer for that over the next few weeks.

We watched several library movies and I read 2 books I had downloaded for free onto my Kindle before I left for camping.  Once home again, Rob took Jake to the library to pick up some books that were on hold and also took him to garage sales while I canned.  In the afternoon, since I was pretty tired from canning, I read several chapters to Jake of a much anticipated book, since it had arrived at the library!

Jake did not go camping this time, as his big sister took him to Disneyland.  Yes.  Really.  She did.  They had a blast and he arrived at my house yesterday looking like a character from Star Wars–a starfighter in full regalia.  He was so cute, but not in a mood for pictures, so I respected his decision, as hard as it was!

I grabbed a few more school supplies at rock-bottom prices, once I realized I needed a few more of certain items.

I did not have time to grocery shop on Friday, as I normally do, and I did not get time yesterday, either.  I will hang on to the weekly money for later in this week, or save it.  We have plenty to eat for now.

What did you do to save money this week?