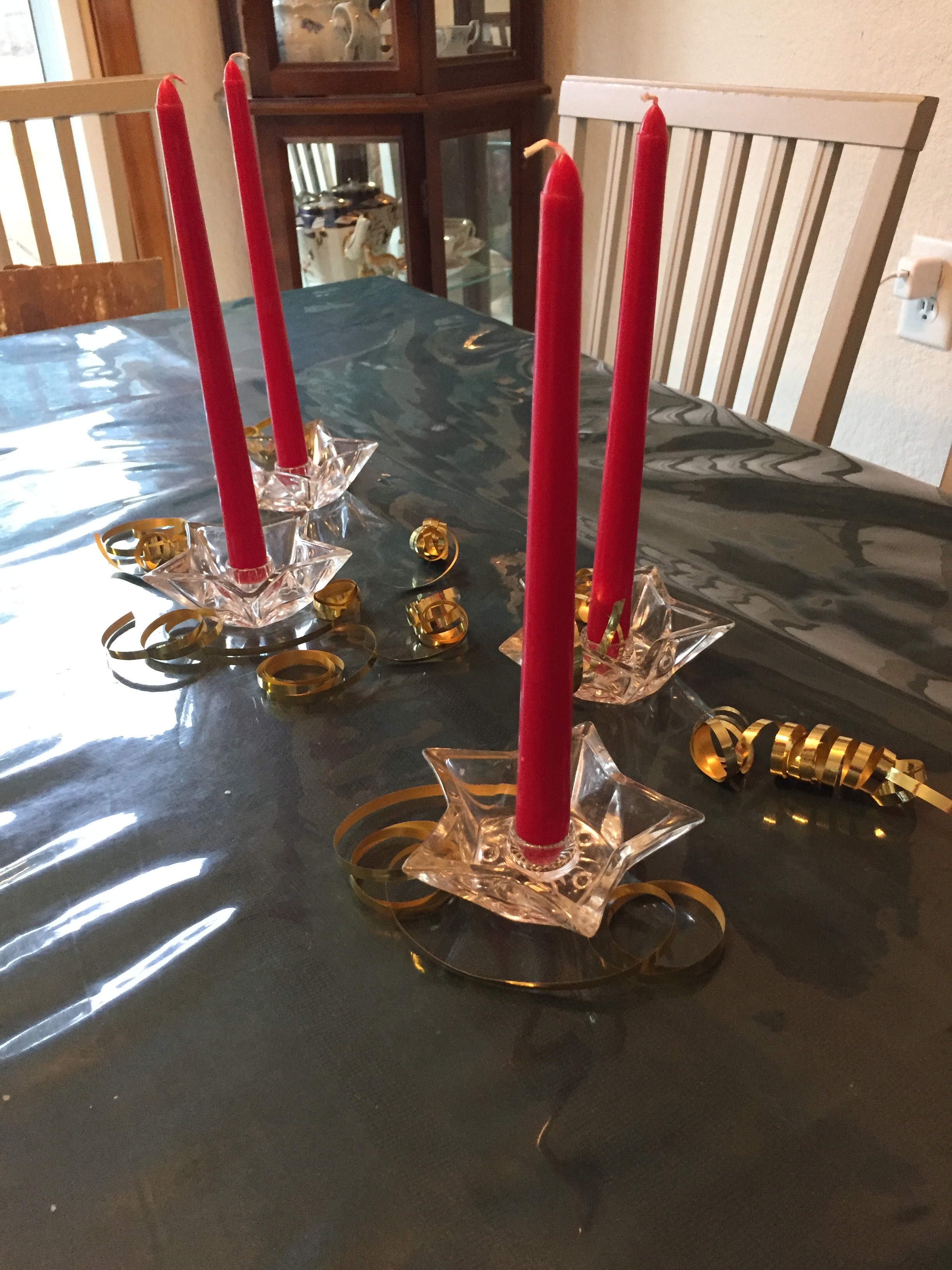 This was a week of bustling around, preparing for Christmas, going to the doctor quite a bit, having company over for lunch on Saturday, and having Jake and Michaela stay over here with us for a long weekend, ending on Tuesday.

On Saturday,  we wanted to attend the Christmas program at church, and our friends wanted to go as well, so we had an early lunch, then went to the program.  This meant that the food needed to be easy to fix, and easy to put away.  Our oldest daughter wanted to come, too, which meant that her special dietary needs needed to be met, as well as my need for no-gluten. There needed to be lots of it, since there were 15 people, counting us, and I needed to stay within my lowered food budget for this month.  Good thing I love a challenge and have a deep pantry!

We defrosted a turkey previously purchased inexpensively.  It was quite small, and perfect for this occasion.  Rob stuffed it with apples, cooked it on the BBQ, and we cut it up on Friday.  We also had part of a ham we were eating on, so I sliced off some nice pieces and set them aside and let the family eat the other bits during the week.  I also had part of a roast beef I had cooked earlier in the week, which was sliced as well.  All of those meats were re-warmed in the microwave, taking care to put a little liquid in with them and they were tightly covered.  Rob handled that. Nothing was dry, and everyone had choices.

I made twice-baked potatoes, home-canned green beans, corn, and cookies.  I also put some baby carrots and cauliflower pieces in a dish.  That was it.  It worked beautifully, didn’t cost much, and there was plenty.  In fact, we are going to repeat the lunch today at Family Sunday Dinner with the leftovers–win-win!

I cleaned the house.  I used items I had for decor.  I found paper plates and plastic cups and even some Christmas napkins out in the garage.  We put up a table in the living room and another small one in Patsy’s room to supplement the dining room table.  Usually, we seat extra people out in the garage, which is set up with a table and some chairs.  It was pretty cold out there, so with these tables, we were able to avoid that yesterday, and the kids were able to play games at the table in Patsy’s room as well.

We ate, visited, put perishable food away, threw away the plates, and put the silverware in the sink and went off to the program.  It really didn’t take long to clean it up that evening.  We had so much fun visiting with our friends, as we don’t see them much anymore since we live a little distance from them now, and the program was really, really well done and wonderful to watch.  The music was amazing, with a large choir, a children’s choir, an orchestra, and also drama with angels, Mary and Joseph, and shepherds with real sheep!  I’m sure glad I was not in charge of those sheep, but enjoyed watching the shepherds manage them:). To me, it really feels like Christmas when I can watch the Christmas story, shown in such a creative way, and I loved sharing the enjoyment with our daughter and friends.  One of their sons recently married, and he and his wife now live down our direction, and have been attending our church (super special for us to see them on Sundays) so the young couple were in the choir, and our youngest was on stage crew–so that was special, too.

I messed up the first tray of cookies.  There was not enough flour in them, and they crumbled up terribly when I removed them from the pan.  So, I crumpled them up even more, made some hot fudge/mint sauce, and will serve the sauce and cookies today over the ice cream that my aunt is bringing to dinner.

I have been buying the super good deals that have been offered at the stores with most of my grocery budget.  This week, my aunt clued me in to the fact that there were eggs for 79c/dozen at Safeway on one day only.  She got me the 2 dozen allowed on her card, since she had recently purchased eggs, and I stopped by and got 2 more.  Yesterday, I got the 5,  8-ounce shredded cheese allowed at Fred Meyers for 99c/each.  I got 5 Hot Wheels cars for 50c/each to set aside for my nephew’s birthday in January, and 2 boxes of coffee at 3.99 each.  (I could have had 5, but that was what I chose to spend). I did have to buy almost $25 of produce this week though–it’s pretty expensive right now, and  but I’m not cutting corners on that right now.  There were several free items I picked up, and one more that they were out of and I can hopefully get before the coupon expires.  I put a few more cents onto my Ibotta account, but most of my shopping was items that were store brands or items that there were no rebates for.   I’ve got about $60 left from the $250 I want to spent this month.  The budget I set was an average of $50/week, plus $50 to stock up on sales with. I am on track to easily manage it, I feel, but will go over if produce continues to be so high.  (I have a little more available, but would rather buy Christmas goodies with it if possible) We are eating home-canned and frozen items, using produce from the $1/marked-down rack when I can get anything there, and still burning through salad stuff, carrots, potatoes, etc. like crazy. Go, us!  The commercial that would rather have us eat peanut butter cups says, “Not sorry–Reeses”. I say, “Not sorry–veggies!”  I’m so proud of Rob for sticking to this diet for so long.  He gets weighed again this week.  Here’s hoping he’s lost some more:)

I had 2 incidents this week where they over-charged me at the grocery store.  I was able to catch it by paying attention, and got both of them corrected.  One time was for $7 and the other $3, so I saved $10. 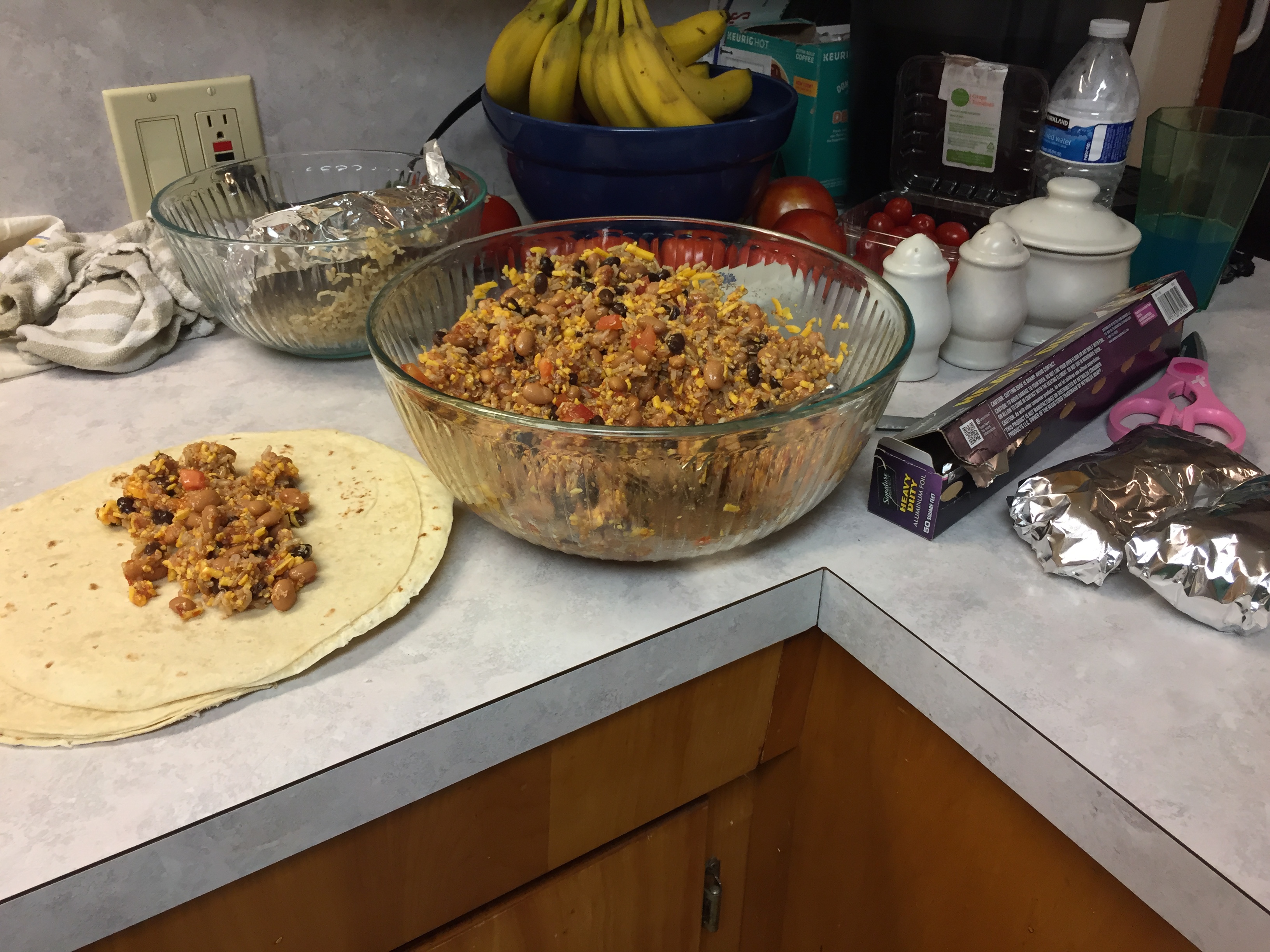 I made a lot of burritos and froze them.  The filling mixture is cooked brown rice and quinoa, pinto and black beans, cheese, a tomato and a jar of the home-canned taco sauce I made last summer.  I found these tortillas at a scratch and dent store for 50c/package.  I filled them, and wrapped them in foil and froze them.  Now Rob has something to quickly make for Patsy for dinner on nights when he is just over-done from the day and I’m still at work.  I made lots and plan to gift a few at Christmas time to one of our sons who would love to have some frozen burritos to eat in a hurry.

Patsy did stage crew for the Christmas program.  She needed black clothes.  We looked through all the clearance choices at Fred Meyers and found a plain, long-sleeved t-shirt type black dress.  We decided she could wear that with leggings she already had, so I got away for only $15, since things were marked 1/2 of the clearance price that day!

I hope your week is not too hectic, and that you can have some peaceful times so you can reflect on the true meaning of Christmas amidst the busy, busy week you probably have ahead of you.  That’s what I hope to do, as well.  Merry week before Christmas!