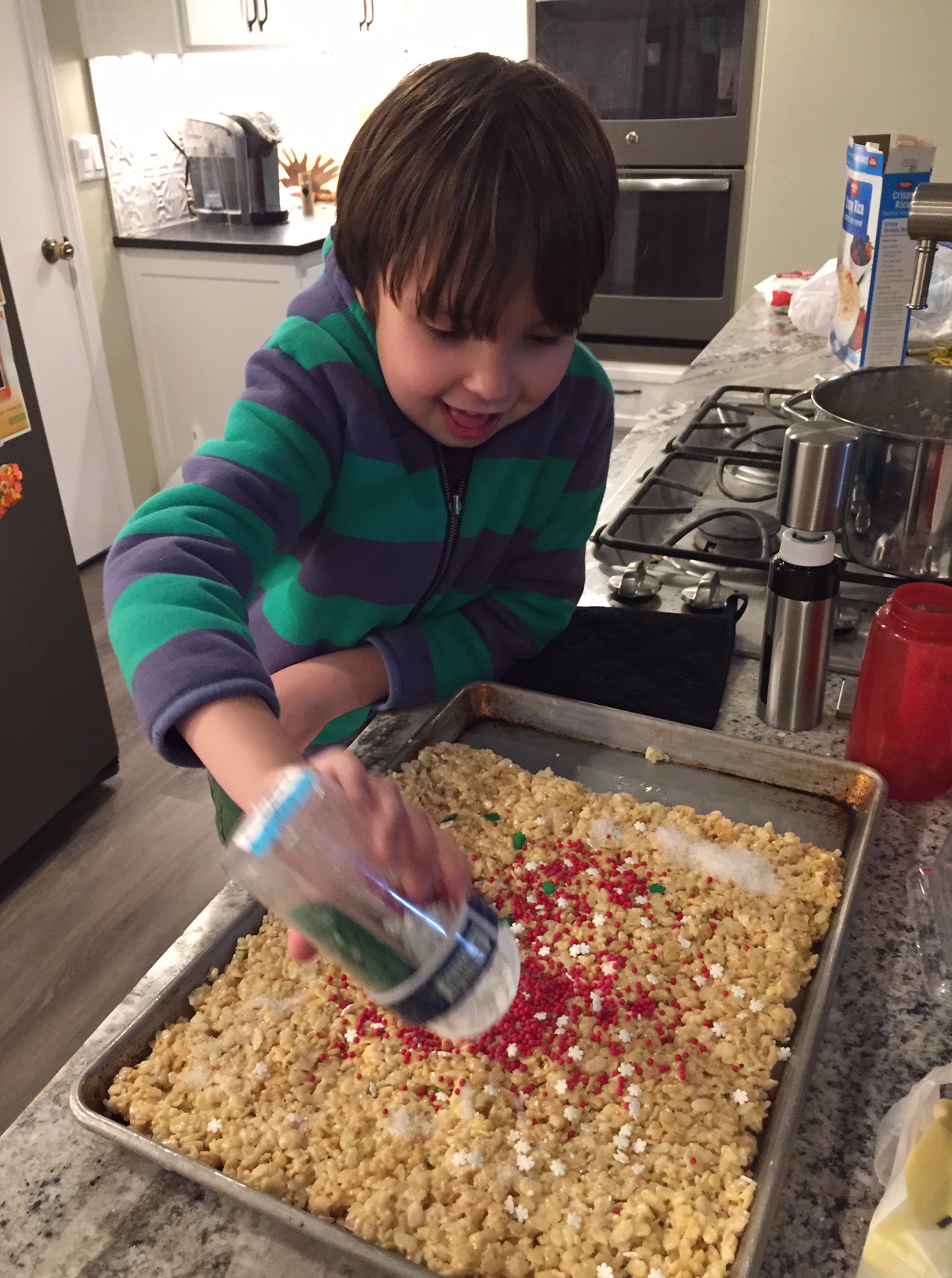 Merry Christmas to everyone!  The post that usually goes up on Sunday?  I think I wrapped it on accident and put it under the tree:). Now that I have a moment to breathe, I thought I’d catch everyone up on our week before Christmas.

We spent a lot of time on Christmas this year, instead of a lot of money, so it was a mad whirl until the very end.  Despite the hustle and bustle we engaged in, there were plenty of times to just do fun things, relax and visit.  I’m very happy with how things ended up.

And, we stayed thrifty. 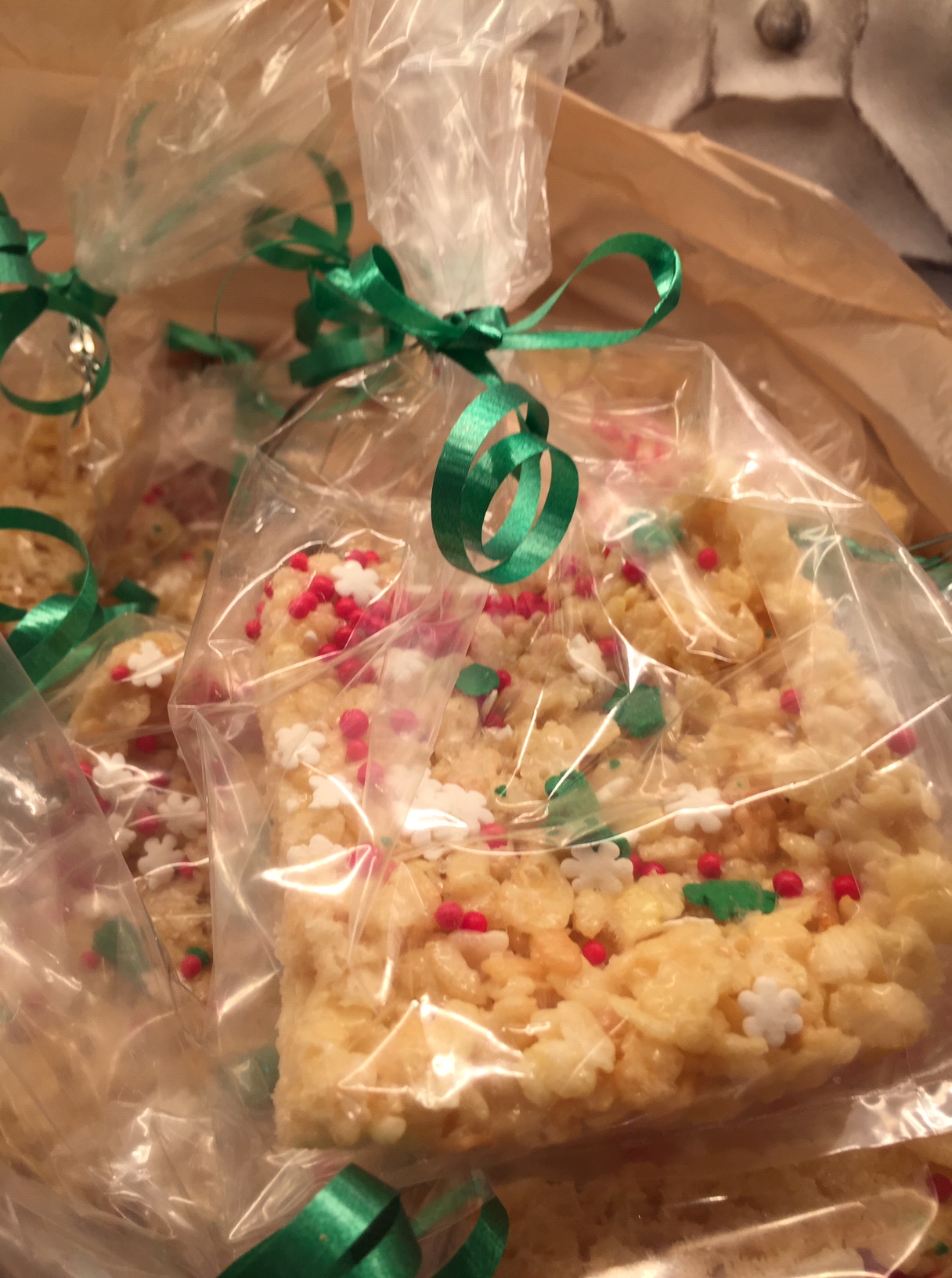 A while back, I was given some super-cute Christmas sprinkles.  Jake used this entire jar up on his 2 projects.  He had so much fun, and took the wrapped Krispie treats to his teachers and bus drivers.  They loved them. 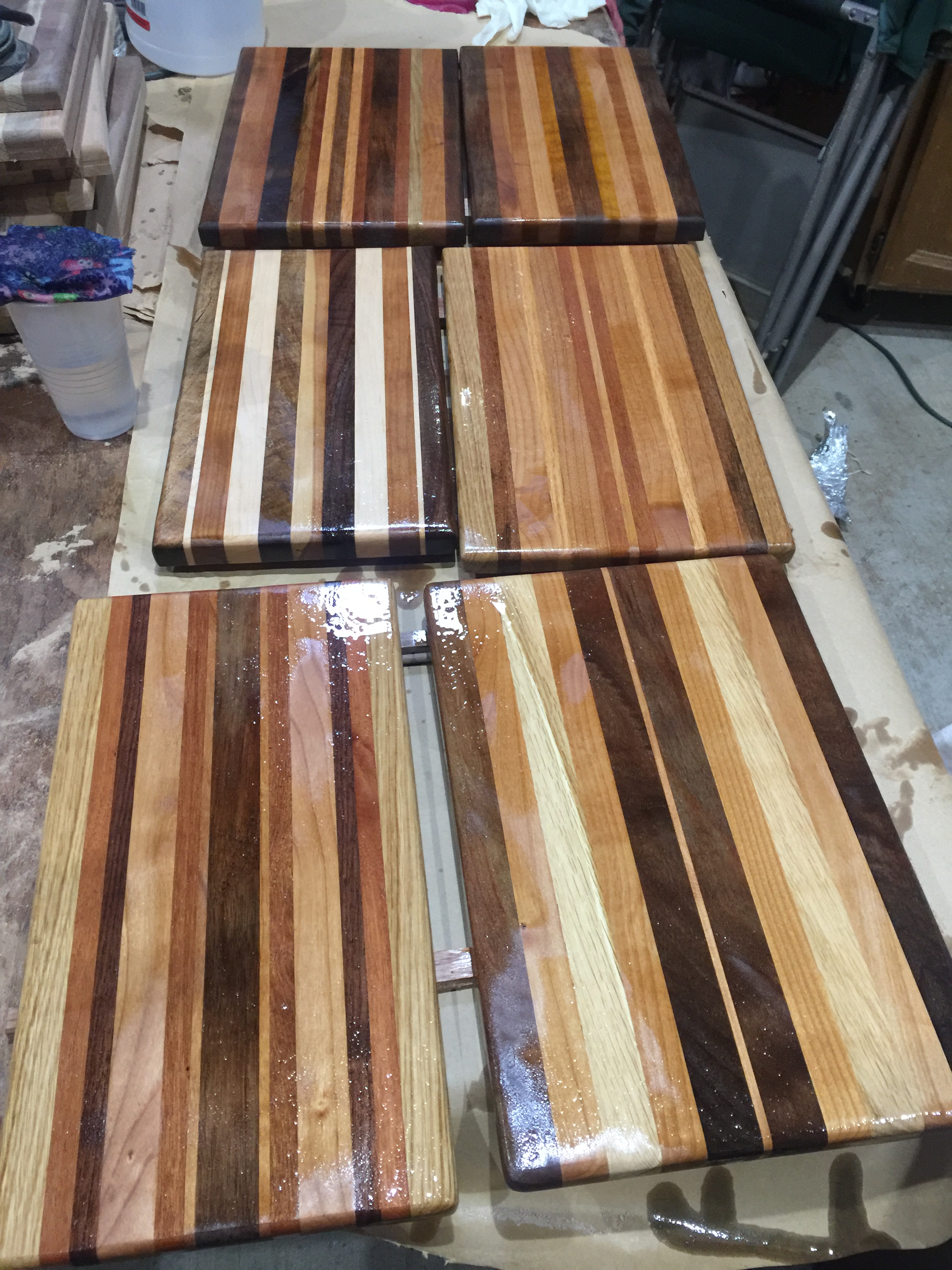 We made lots of gifts.  Rob made gorgeous cutting boards for quite a few family members and friends.  This photo is in process, when he was treating them with oil so they would stay nice.  He made them all from reclaimed wood.

I sewed quite a few items.  We put together several photo gifts–some enlarged pictures, and a couple of photo albums.  We used coupon codes from Walgreens when we ordered the prints and went through Ibotta to get a few cents back.  One album was put together by Patsy for the cousins’ grandma who is visiting from Florida.  That way, she can have pictures of her far-away grandchildren all the time.  She loved it! 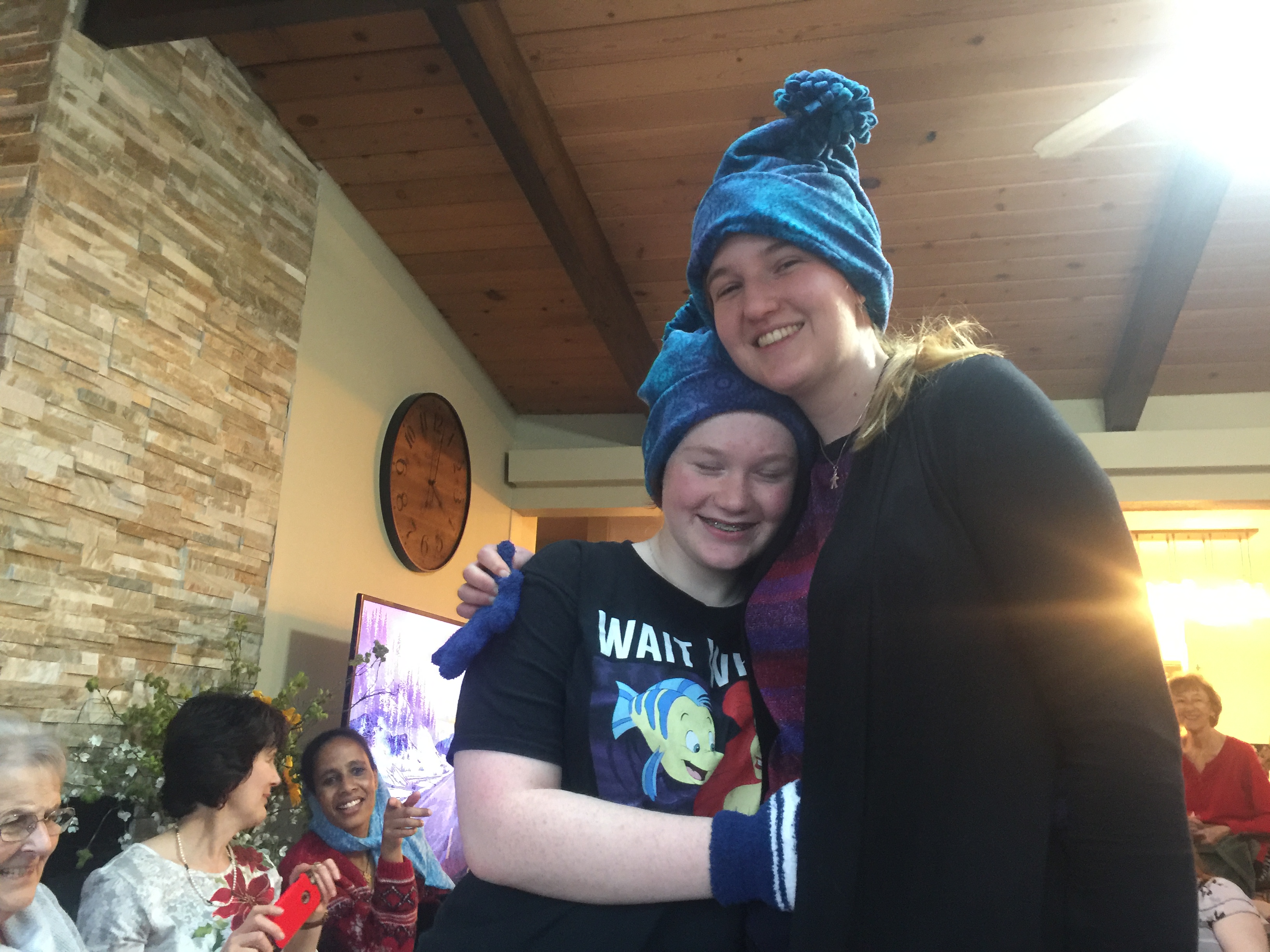 Patsy and Rachel got matching hats.  When Patsy chose her new middle name, she chose 2 middle names.  Rachel is one of them.  She’s a pretty special cousin and they like hanging out together when they can.

Patsy made super-cute bird houses for lots of us, and Chex Muddy Buddy mix for the rest.  Everyone was happy!

Harnet and Danait came and stayed for a couple of nights.  We had so much fun! 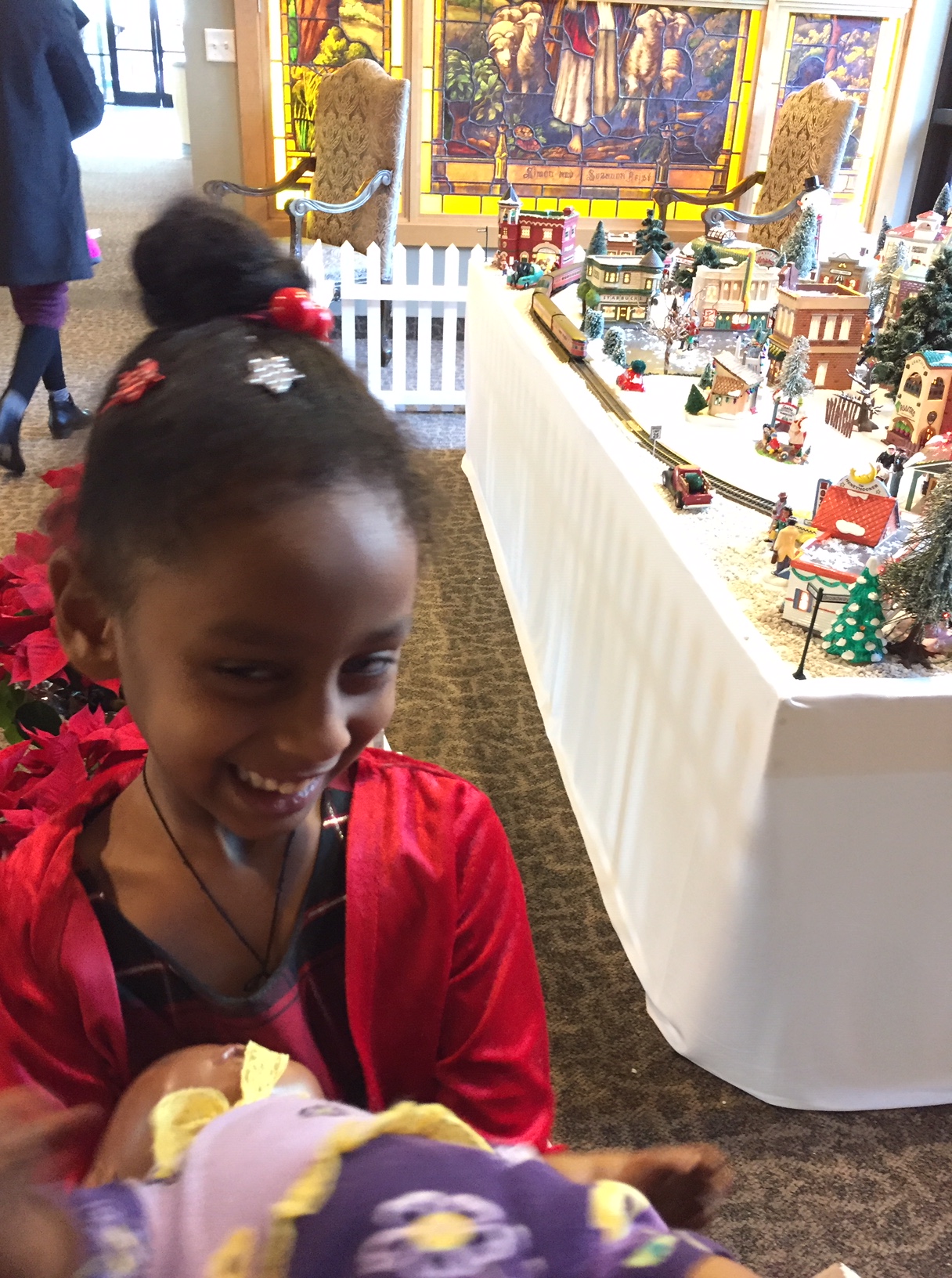 Danait loved seeing the Christmas train at the church before service on Christmas Eve.  She remembered it from last year and was so happy to see it again.  The service was lovely, too. 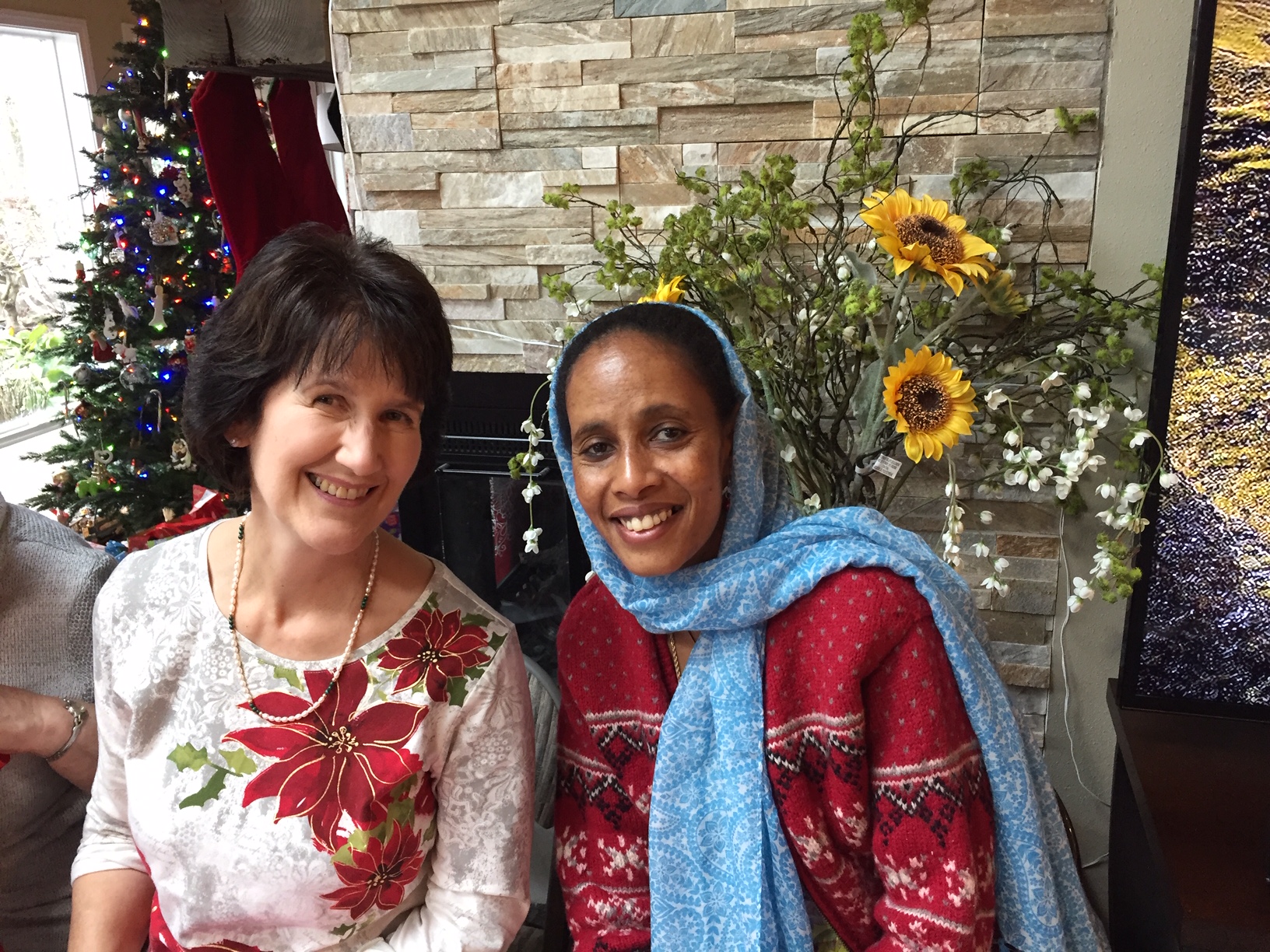 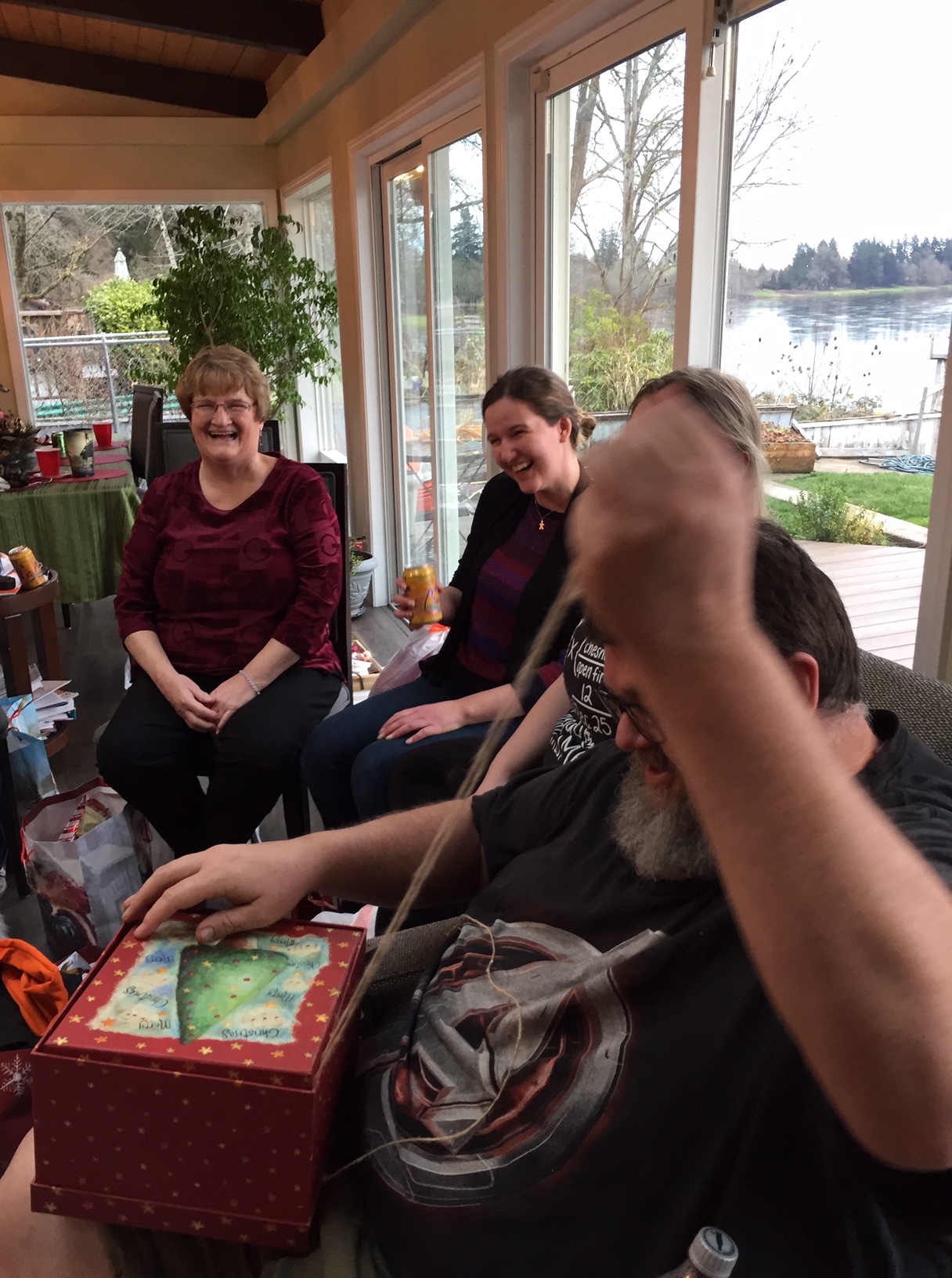 The signs read, “Ft. Knox” and the keys were to open the fort.  The truck was a “get-away” car to haul it away with:). Then inside was a bag of gold coins (chocolate, of course!). It was very clever and everyone loved watching him open it. 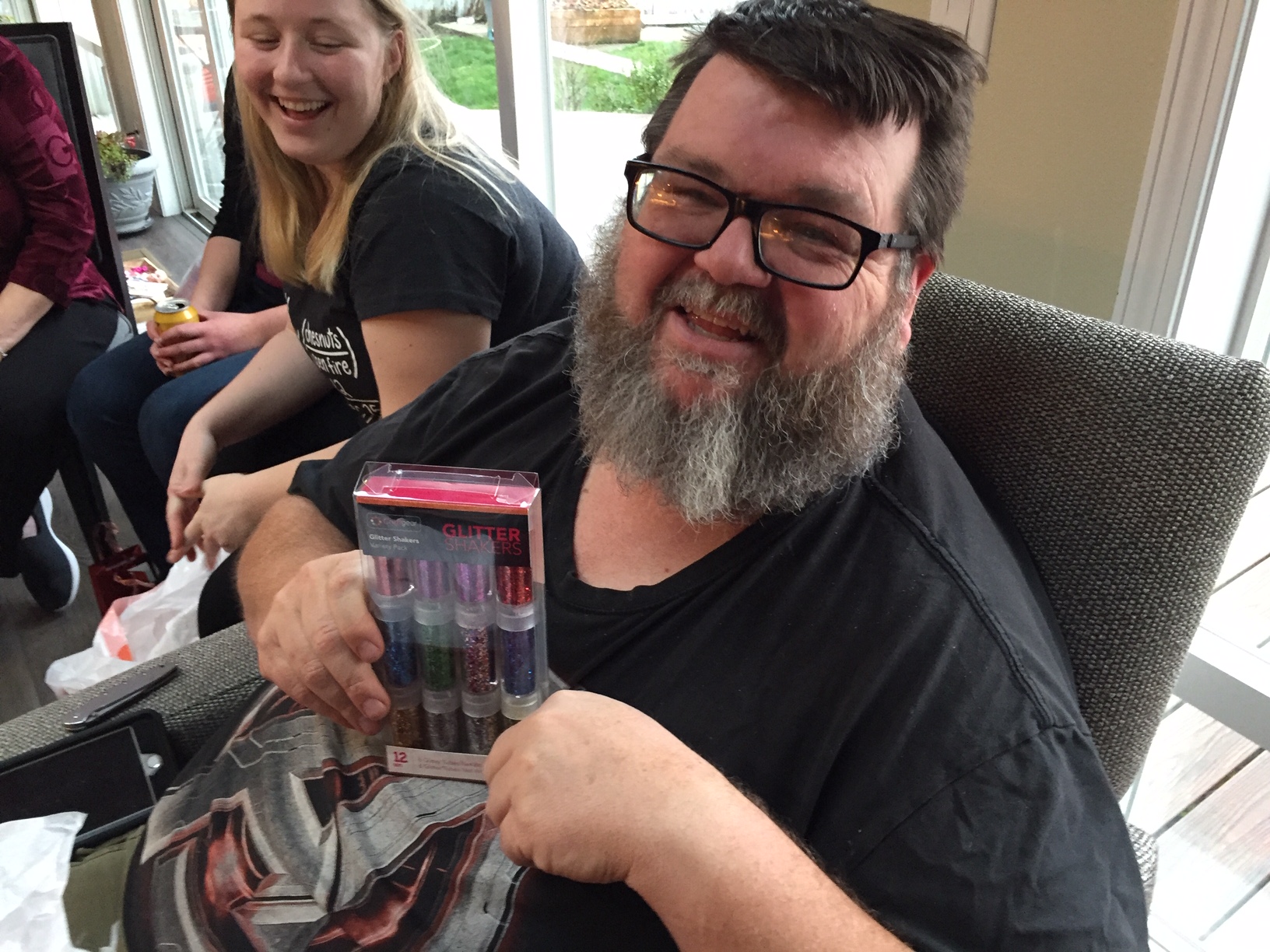 The glitter was in there, too.  I mean, gold glitters, doesn’t it? 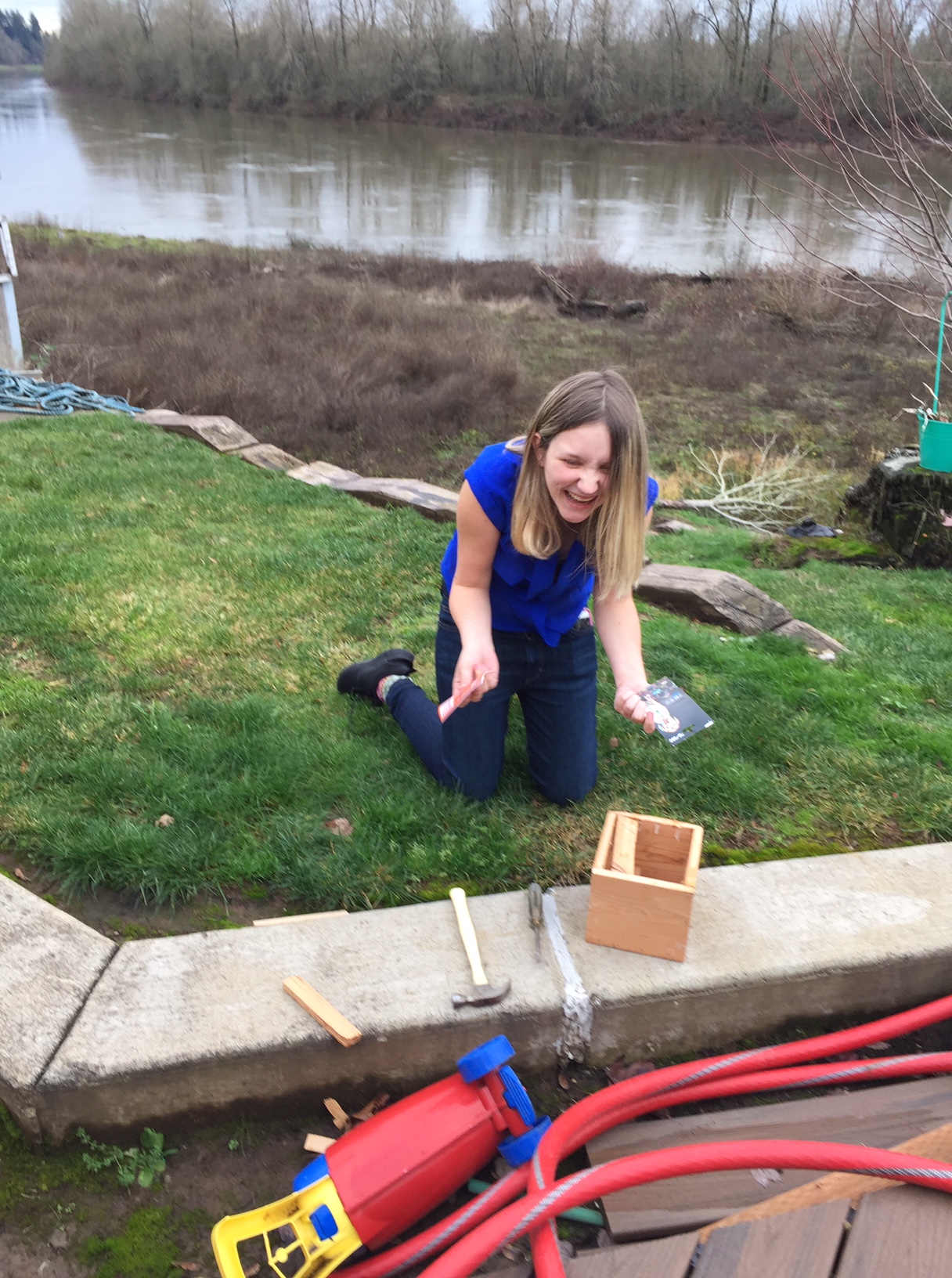 Of course, Rob was up to tricks, too.  He nailed and glued Alissa’s gift together, then finally gave her a hammer and chisel so she could pound it open.  Once she got in, she was baffled by the Home Depot and PetCo gift cards (both blank).  He finally pulled her real gift out of his backpack, but sure had fun teasing her first! 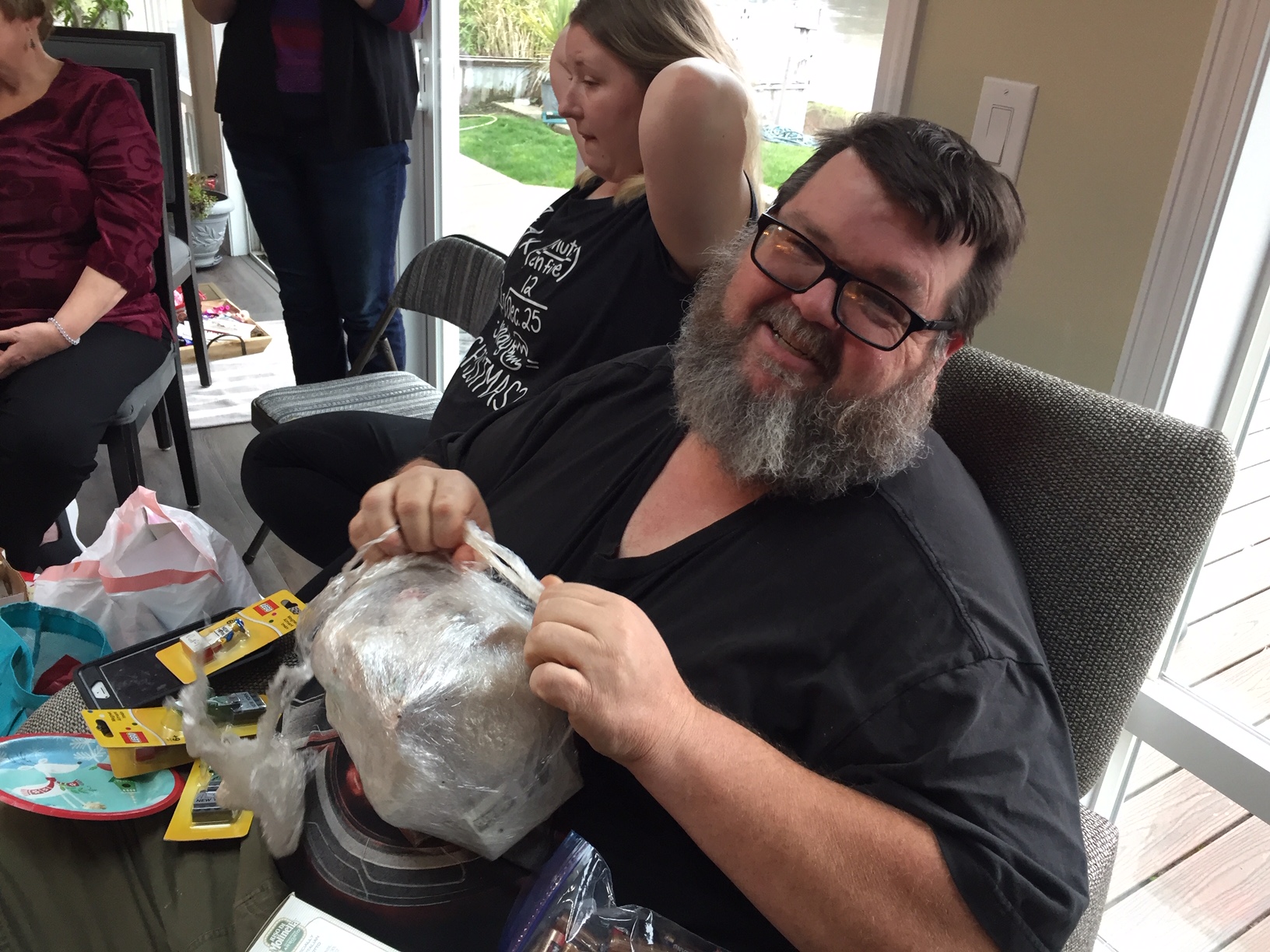 Of course, she paid him back by wrapping his gift in miles of bubble wrap, yards of tape, saran wrap, and lot of other sticky stuff. 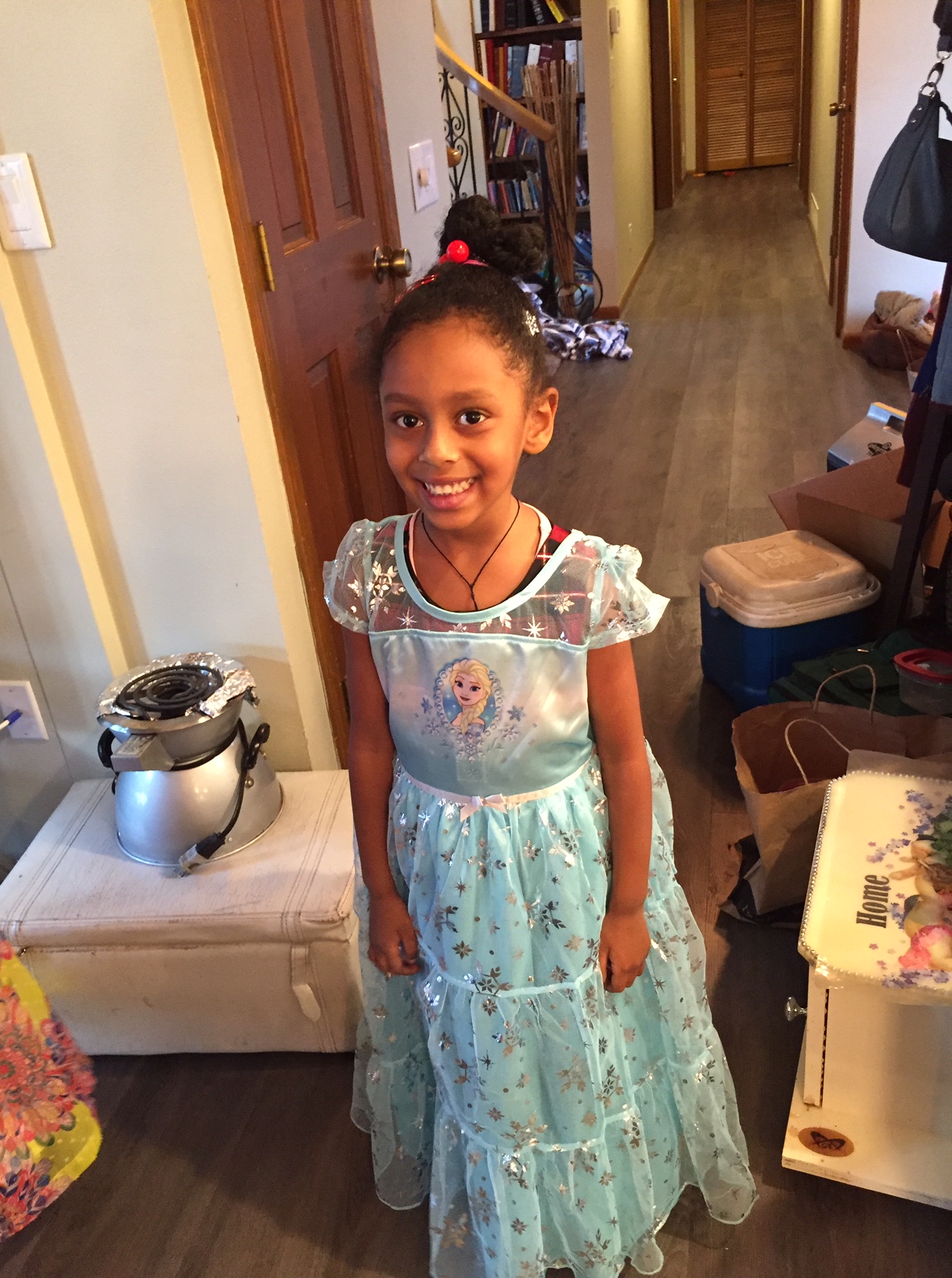 There was an ice rink of “Frozen” going around the place!  Little girls are so fun to buy Christmas gifts for, and the family had fun, I’ll just say:). Her little costume (not in this picture, this is a nightie), actually has lights on it and it sings, “Let it Go.”  Crazy! 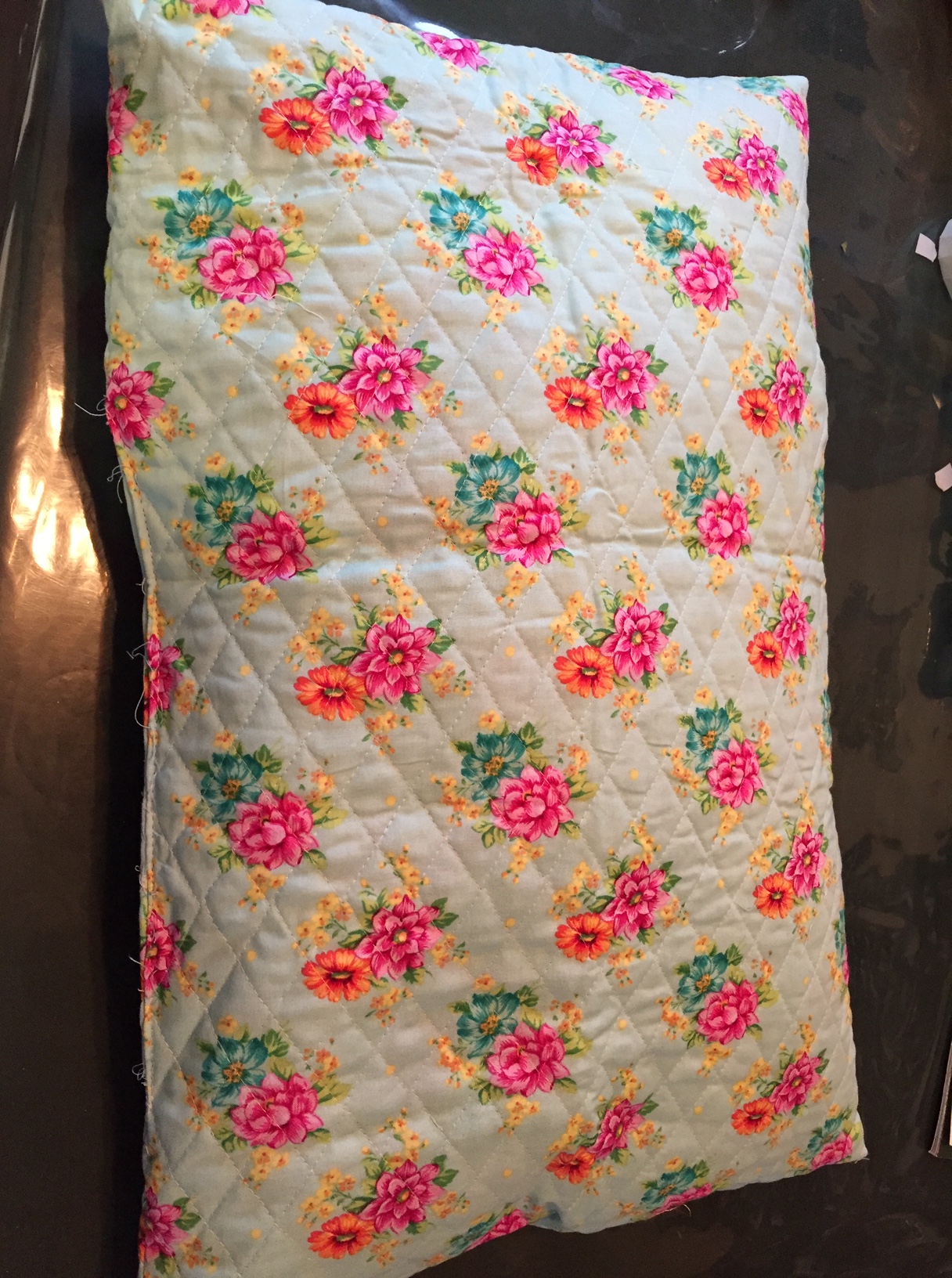 Believe it or not, I got a few non-Christmas-related frugal things done as well.  I re-covered Rob’s pillow with some quilted fabric I’ve had for a long time.  It was worn out, but he likes that exact amount of stuffing, so I just made a new cover.

We did some deep cleaning and organizing on several days, spending several hours we probably should have used for other purposes, but it sure feels good to have some areas clean and things organized that were messy before.

I cooked many meals.  I spent every last cent of my reduced $50/week, plus and extra $50 grocery budget, and have to admit, I dipped into the “little extra” I had set aside.  I will still end up the month under $300 instead of $250, and that includes several food gifts for people, all paper products and toiletries we needed, Christmas extras like cream cheese,  plus lots and lots of produce for my salad eater, Rob.  One thing I bought was 5 boxes of Chex cereal for $1.49/box.  Pasty used a lot of them for her Chex mixture.  The lady behind me in line said she had never, ever seen anyone buy so many boxes of Chex at once.  (She was nice, it just wasn’t part of her world to stock up like that). I politely made conversation with her, but later, to Rob, I said, “who COULDN”T eat 5 boxes of Chex!!!”  Frankly, she might just faint if she every saw my garage:)

Patsy got to do work projects with the youth group at church twice, racking up money in her account for youth group activities. There is a retreat in February she is working hard for.

Today, when I took Harnet home, I got stuck in traffic on the way back.  It took me a long time to get home.  Thankfully, I had a piece of candy in my purse, which I ate,  and then grabbed a little ziplock of frozen ham and bean soup from the freezer, and warmed it up right away once I got home.  I was so glad that was in there!  I almost had to stop and grab something, but made it home without a low blood sugar, saving at least $5-$7.

Rob grabbed some wrapping paper, bows and ribbons today at 70% off.  We wrapped most gifts this year instead of using bags, using paper bought on clearance another year. 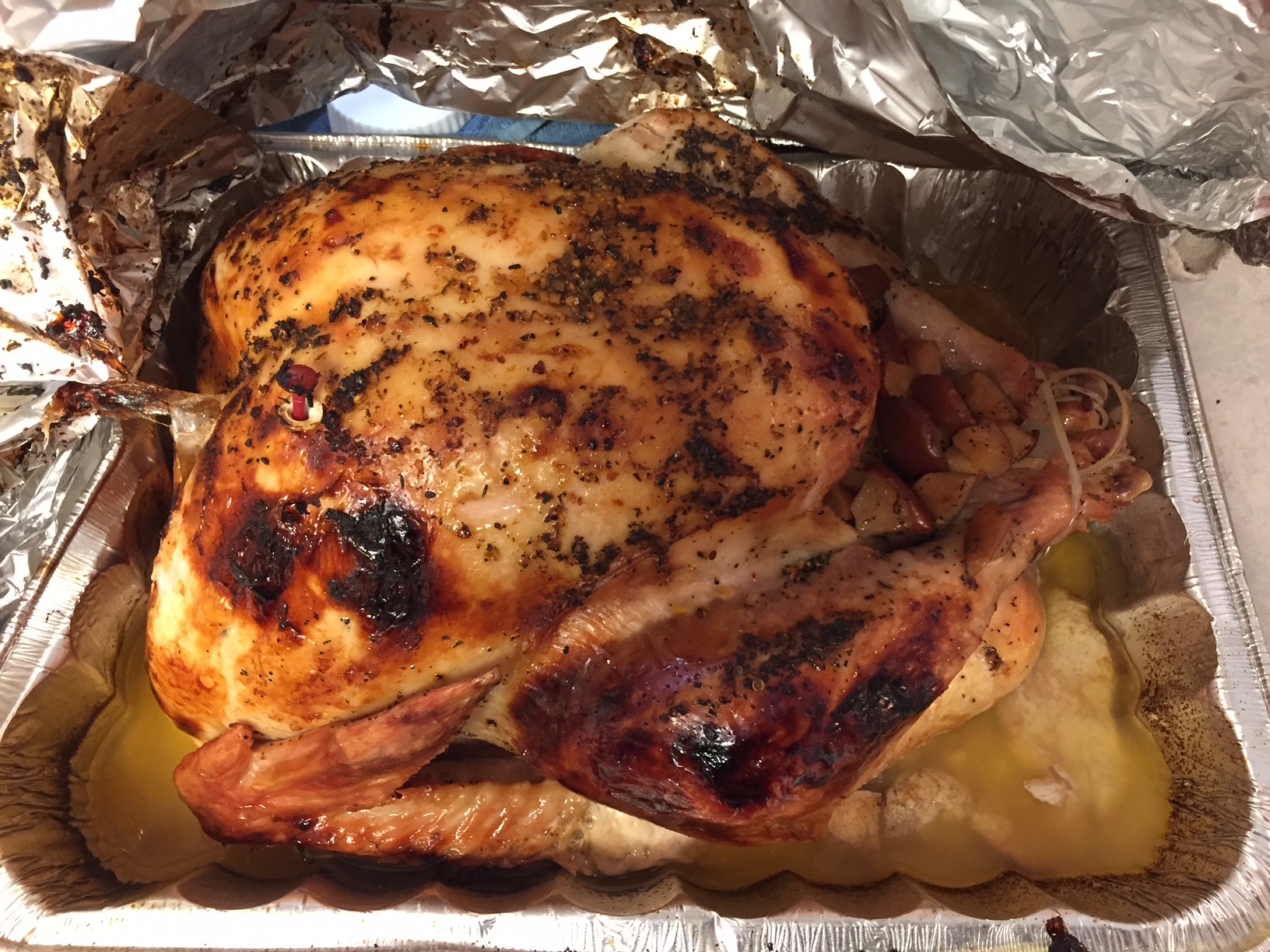 The holiday was wonderful.  There are many more pictures I could show, and many more people who shared the week with us, but this post is way too long already.  We had a great time together as a family, and with friends over the past few weeks.  Tomorrow, we start our routine again, by taking the kids to the pool in the morning and I’m going to my exercise class.  Let’s just say….. it’s time:). I had a lot of turkey.  and ham.  and…….