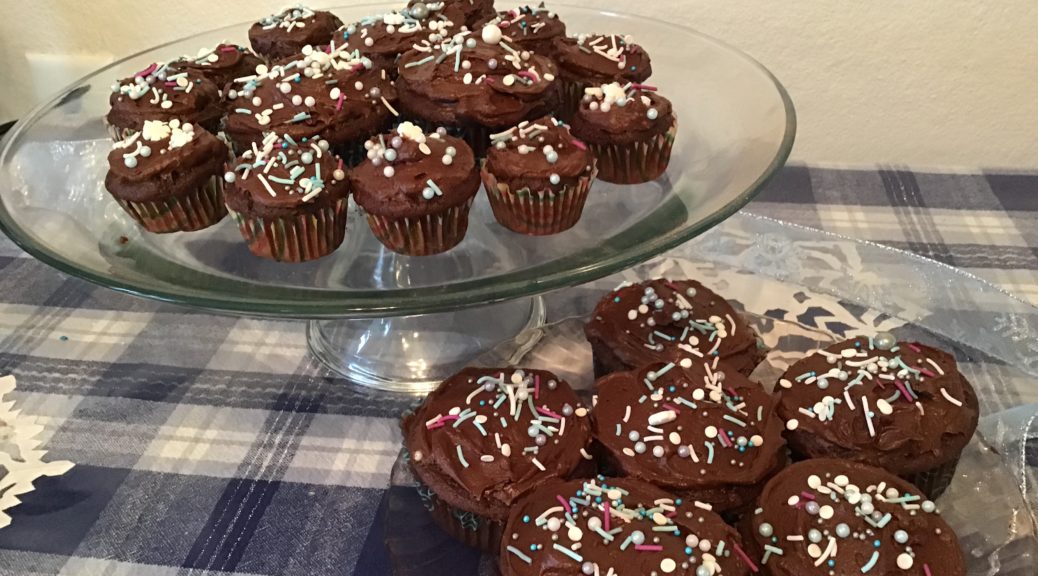 This was a crazy week, even for us! After the formal dinner last Saturday night, and cooking for the college-agers on Tuesday night, we had a family gathering at our house yesterday for Rob’s family, and then a birthday party today at Family Sunday Dinner. Rob, Alissa and Jake all have January birthdays, so we have a small family party each year. We had a lot of fun and stayed frugal through it all!

Yesterday, I decorated simply, using some greenery from the yard and a few glittery snowflakes and ribbon purchased on the after-Christmas sales. Patsy made paper snowflakes and we put them under the plastic cover so they stayed put and looked nice.

People brought food. I made some as well. I made sweet and sour meatballs with rice, chicken soup, and cupcakes.

We served water, coffee and tea.

I got this great shot of Patsy and Rob’s mom, Grandma Dee-Dee, as the children call her. It was really good to have those relatives over. Sometimes, it gets way too long between visits.

Rob went and got Anthony and Allison, and they had a good time getting to see these relatives. It’s quite a lot of driving for Rob, but we like them to be included when they can come, so it’s worth it to us. (They live in separate group homes, about 30 minutes from us and each other–so it takes about 1 hour to 1-1/2 hours each way to do the rounds to get them and take them home, unless some of their staff can give them a partial ride.).

Rob’s sister brought us a lot of avocados that she was given by a neighbor. They are “duds” from his work where he sorts avocados as part of his job. They are thrown away if no one wants them, so he brings them to her and all the neighbors. I had at least 3x that many, and shared a bunch of them.

A lot of our canning from last summer became nice little gifts for Rob’s family.

Todays birthday party was nice, too! As you can see, Rob celebrated, but very minimally! We made it very simple, with hamburgers, potato salad, chips, salads and brownies and ice cream.

We did a few other things other than go to parties this week, believe it or not:). We cooked and cooked and cooked, for starters. I finally ran out of a bunch of grocery items, but was able to pull a lot of what we cooked from the pantry, freezers and canning cupboards.

For a while now, we’ve had a problem with our stove burner–it was on high heat all the time. We were able to get it fixed while still under warranty, which is up in early February.

I was able to get a tiny bit of yard work done–a rhododendron removed, some Coral Bell flowers moved, some chrysanthemums put in the ground, and so forth. It was rainy, but I was able to fill the yard debris bin and I’m setting the stage for some landscaping I want to do. I have some Al’s gift cards (a local garden center) and I have plans to spend them in the spring. Inside, my basil is sprouted on my windowsill.

I read half of a library book and made sure the things that were coming close to being due got returned or renewed.

I worked on my blog for hours. I’m trying to do one thing to it each day. Much of the things I’ve done are behind the scenes, such as add the “like” button, the WordPress “Follow” button, and an anti-spam plug-in. I just keep reading articles, sometimes over and over and over, but the new site is coming along.

I exercised at the YMCA on Thursday.

I took some clothes the girls had not wanted to a used clothing store and got 2 new-to-her tops for Patsy and $16. They didn’t want much of it, but hey, anything helps.

I hope your week went as well as mine did. Feel free to share in the comments below, and also let me know if anything is not working correctly on the new blog. Thanks!