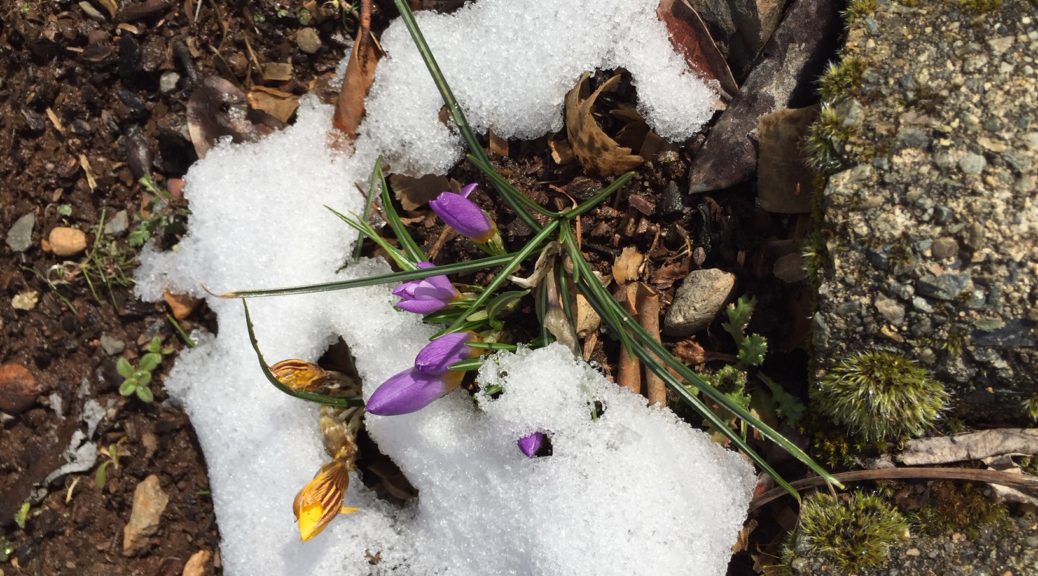 Some weeks, I feel like these crocus–trying to keep my self blooming in the snow! This week was a bit like that. We were so very busy, I hardly had time to breathe. It was also a bit difficult.

This morning, I got up reluctantly. I was tired from a week that was busier than usual, and it was compounded by the time change. I sleepy stumbled into the kitchen, and started my morning routine–food, meds, shower—you get the idea. I put on a warm sweater and some pants, as it was very cold and frosty outside and it takes a long time for the van to warm up. As I was gathering myself up, Rob mentioned that my hair was sticking up. I smoothed it down with my hand, and encouraged the girls to get into the van. Michaela spent a couple of nights here, so she was needing to gather her things as well.

As we drove down the road towards church, on time, but not early, voices from the backseat informed me that my hair was STILL sticking up, and they thought I should do something about it. Hmmm. I thought I already did, but a glance in the mirror showed how ineffective my previous efforts were. What to do? My eyes lit on Rob’s water container from the previous day. It was almost empty, but I only needed a tiny bit on my hand to smooth that hair down with, right?

Let me say right now that pouring water from a Hydroflask onto your hand in a moving van is not the best idea. At all! Much to my shock, icy cold water rushed out of the bottle, quickly overflowed my hand and poured onto my pants, giving my quite a shock! I now had a soaking wet, icy-cold leg. The van heater was still ineffectually heating up the interior after the frosty, cold night, so it did not dry my leg. The little blanket we call “Car Blankie” since it has lived in the van for many years, did a little better, as I sopped up the ice water the best I could. Of course, Rob offered to take me home to change, but I figured my long outer sweater would cover the wet place until it dried, and we were none too early:). I will say, I did smooth down my hair and it stayed put during church. I also will say that I was no longer sleepy and I likely got more out of church than I might have otherwise! Still, I would not recommend the experience to anyone:). I’d say some hot tea, Diet Coke, or coffee would be a much more pleasant way to get the morning going. I did have one of the more memorable rides to church I’ve had in a while, but I’ll happily forgo that and have a nice, boring ride next week!

So, what did we do to keep thrifty and thrive this week?

Rob cleaned out the greenhouse and set up the heat mat. I hope to plant seeds soon. It’s been so cold that I feel like I would have had to spend a fortune on electricity to run space heaters to warm it enough to grow plants, but now I need to start things or there won’t be time for them to grow. I ordered from both Pinetree Garden Seeds and Territorial Seed Company a little while back and both orders arrived. I had a lot left over from last year, because I purposely only used 1/2 packets of things like peppers and tomatoes, and will start the other 1/2 packets this year.

Rob and I cooked over at my sister’s house 2 evenings. One night, he made a panko/parmesan crusted chicken. Some ate it with noodles, some with pasta sauce, some plain. We had salad, and beans as well. Another night, we made tacos. We used food from there and here to make up the meals we shared. We were over there much more than normal, as they were working/had appointments more than usual, and we needed to build up extra hours for when they are gone at the end of the month. We are so grateful that we could do that, as it would have been very difficult to go without that income! They were grateful, too, as it helped their week out as well.

One night at home, I made a quinoa pilaf and a stir-fry. I used up a can of baby corn that has been lurking in the pantry for literally years. It was time, and was fun to eat something different.

I made a recipe from a magazine, but changed things up so much that it was a whole new recipe. It tasted a lot like Pad Thai when I got done. It was really, really good, and loaded with all kinds of veggies.

I took Michaela swimming once, and Rob took her twice, using our YMCA membership. In the beginning, they allowed us to put her on our membership because the kids are with us so much, which was really nice of them. She wanted to watch a movie, so Rob took her. She has money for things she does, and Rob got in for free as her Personal Support Worker. That theater does that for special needs kids, which is very nice of them, I think. Patsy had a gift card from Christmas and used that for her ticket, and used both girls used their own money for their snacks. So, all Rob had to pay for was a little popcorn, which he shared with them, but he almost had a heart attack at how much that cost! (Good thing his heart is so healthy!). Another thing he did to keep her occupied this weekend was to take her out to lunch. At Costco. It didn’t cost much, and she loves to eat there. She had a hot dog.

On Friday, Jake had oral surgery to remove 7 teeth. There simply wasn’t room in there for them all. Some were baby teeth, but some were too-crowded permanent ones. He didn’t want any pictures taken the day of the surgery, or afterwards, so I honored that request. He is miserable. I helped his Dad take care of him all day Friday, and we brought Michaela home for the last 2 nights, and kept her busy. She can’t handle him being upset or crying. The plan was originally for me to bring him home this afternoon, but quickly determined when we stopped by for him after church that he is not up for it. I will go over there after while and see if he will let his Mama have a little break. I can fetch things for him, or read, or whatever. They’ve all been up over there for most of the last 2 nights. He’s been crying a lot. We are all in distress over it. He is not able to reason his way through the fact that it does hurt, but it will feel better each day. He just knows it hurts. In the meanwhile, he is not eating much at all–just a few bites of Jello and some egg flower soup from their favorite Chinese restaurant. I know this, too, shall pass. It’s just hard to watch for all of us who love him so much.

I got 1/2 of my house chore list done yesterday. It’s better than none.

Needless to say, I didn’t get much done on my quilt. I did, however, pass a few levels on my Farm Heroes Saga game on my I-Pad while waiting for Jake to come out of surgery. Not much of an accomplishment, but some weeks, you take what you get!