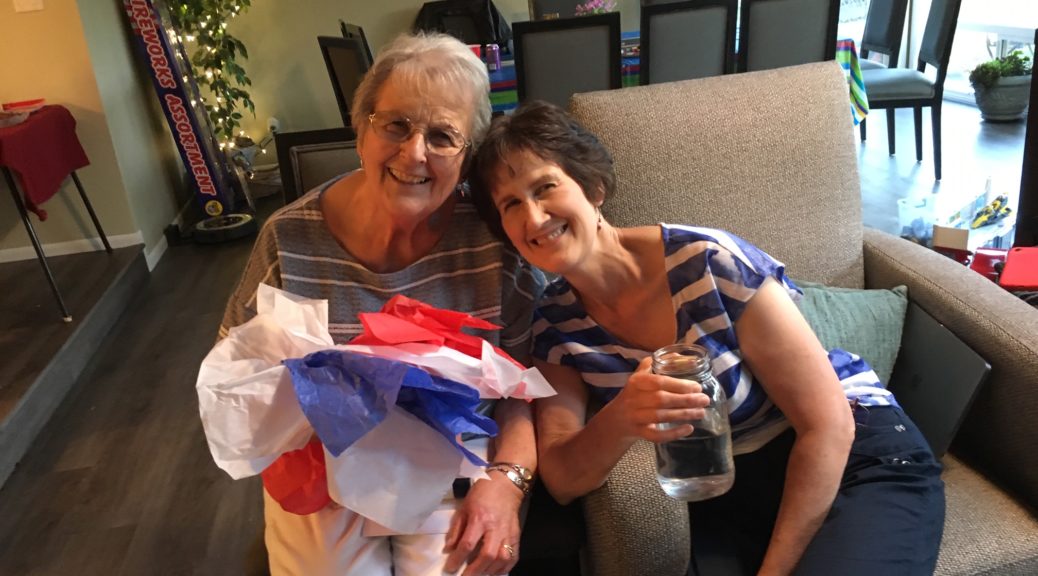 We had a pretty fun week. It started last Monday, when I went to the zoo with some of my favorite people. Weeks ago, I promised my friend, Harnet, that I would be delighted to spend time with little Danait while she worked that day. Her regular day care took the week off, and different friends pitched in to cover. I chose Monday, and Patsy and I planned a zoo trip, using my zoo membership. Then, much to my surprise, Jake and Michaela’s older sister decided to take them to the zoo that same day, too. So, we met up, of course.

Danait immediately started fixing Caitlyn’s hair. Over and over and over. Caitlyn loves kids. Good thing:).

….because Danait rode on Caitlyn’s shoulders for most of the zoo. Notice the zoo cup way up on top. Danait is trying to be as tall as a giraffe. Those cups are great. You can just keep bringing them back over and over and fill them with soda for $1.25 with your membership. This time, they told Caitlyn that refills were free in that certain cafe, so even better. Patsy has 2 cups from years past and we brought both–one for her and one for Danait to use and filled them up to go with the picnic food I brought.

The week continued full of fun and frugal activities. We had Jake and Michaela on Tuesday and mostly drove Michaela to appointments and did errands like shopping at Costco, etc. We took them to lunch at Costco. It is such a great bargain to eat there. Then, Wednesday, we only had Jake. One activity that day was making cupcakes for the 4th and Grandma’s birthday. We used ingredients we had on hand, and made them from scratch.

She never seems to mind the red, white and blue wrappings on her birthday presents. We do set fireworks off for her, though, and have a “blast” doing that:)

With Alissa and her dad in charge, every kid got a turn to choose a firework to be set off, poppers were thrown down, and lots of smoke bombs and sparklers were lit.

The kids had a ball! (The number of guests was somewhere in the upper 20’s, a mixture of friends and family) Jake was really into playing with his friends that were there. At one point, I was handed a light saber and a toy gun and told to sit in my lawn chair and I would be “safe” from the storm troopers that were coming! (We could see a group of lights across the river, which were dubbed storm troopers….). I also got invited to play Legos, which I did for a while. Otherwise, I just had fun being with everyone. Except Rob. He didn’t feel well, and decided to stay home with the new dog. It was a good call. Safari wasn’t fond of fireworks, but did ok with Rob there.

The best part of the 4th, though, was that Lovana flew in from Hawaii for a visit. We will be enjoying her company for a week. She was so glad to spend time with her cousins, aunties and uncle this week, and has more plans in the few days she has left with family and friends.

So, I’ve been cooking up a storm, since Ja’Ana was here to eat as well one day and I have been feeding extras. I also spent quite a bit of time restocking at Costco, Grocery Outlet, Azure Standard, and Natural Grocers. I’m almost finished. For 3 months, I have been using quite a bit from my pantry, freezers and canning cupboards. The truth is, if you cook from scratch a lot, sooner or later, things run out. (Thank you Mrs. Obvious). The only surprise to me is that so many things ran out at once. I’ve actually been substituting on some things for a while now. So, now I’m good to go again for a while, except for a couple of items I still need to get, like tin foil. I bought things where they were the best deal, to the best of my ability. I got a very few Ibotta rebates, but most things were not qualifiers for that program.

To give you an idea of what I bought, here are just a few of the items: 25lbs rice, baking powder and soda, salt, pepper, bulk spices (lots), cleaning supplies, laundry aids, ziplocks of all sizes, parmesan cheese, lots of gluten-free pasta, produce, cheese, and so on.

I made Rob hold the bag of rice to illustrate that he’s lost more weight than 4 of them so far!

To end the week on a high note, we visited the Salem Farmer’s Market with friends. The kids participated in the “Pops” program where this week, they tasted honey, and received little toys and each got a $2 voucher to spend at the market. Patsy bought a little carton of blackberries with hers and ate them while she wandered around.

They all had a great time at the market, and then Patsy’s friend came over to hang out for a while afterwards. The girls played a long game of Monopoly and painted their toenails. I fed them sandwiches and fruit for lunch. I love to see that there are still kids around who can enjoy themselves with simple things, and am especially glad that Patsy is one of them.