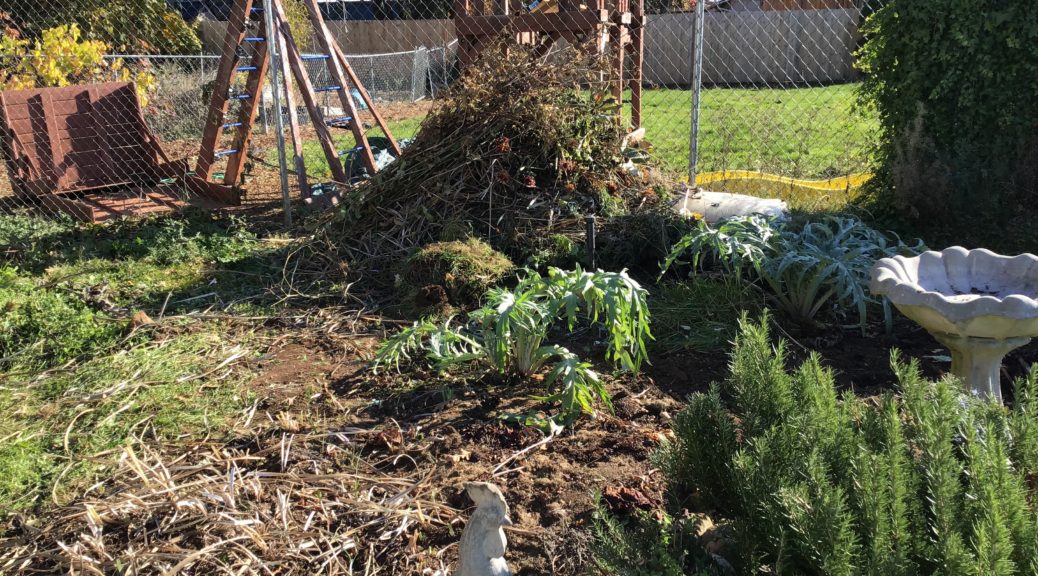 The weather became very nice this week and I was able to spend several hours in the yard and garden. The huge pile of debris in the back of this picture is my secondary compost pile. I plan to let it rot down over the winter, rake the non-composted weeds off the top, and spread the nicely composted soil that is underneath since some of it’s been under there for over a year. I love having home-made compost to help fortify my soil. There is never enough!

Patsy clipped off her 3 dahlia plants. They had frosted, so were dead. She put tomato cages over them and piled leaves on them. We have fairly mild winters, so they should make it over the winter that way.

There was another picking of lettuce scattered throughout the garden. Surprise!

We got it really cleaned up. There are still more jobs to do, but I’m happy with what we got done.

I spent quite a bit of time this week helping my daughter, Lovana. She’s back from Hawaii, has a little place rented, and started back at her old job. She is staying with us until we get more things moved in over at the new place, as we only got part of what she has moved over. We went to a thrift store where she got a few things, and I grabbed 3 skirts for Patsy and a bowl, for a grand total of around $8. Some of the thrift stores in our area are expensive, but this one is not. It’s where Rob has been getting clothes in smaller sizes as he continues to lose weight.

We were able to take the kids to a very nice harvest party at church on Wednesday night. They had a lot of fun. Patsy helped run a game and Jake and Michaela enjoyed themselves. On Thursday, Michaela continued her tradition of riding up and down the street in the van with Rob while eating Reese’s Peanut Butter Cups. She’s followed the same pattern for the past several years. She never gets out—just enjoys the ride and the candy and dressing up in her tiger pajamas. Patsy took Jake up to the doors to trick-or-treat. They lasted about 30-45 minutes, and then he was done.

I read a couple of library books.

I cooked some items that have been in the pantry for quite some time. I finally shopped for the first time in 2-1/2 weeks and got a few things, but not too many. Some items have lingered around the freezers and pantry for too long. I never seem to use them unless I put a little pressure on myself. A couple of the things I enjoyed were pizza from a home-made mix and some pepperoni that has been lost in the freezer and brown rice/dried cranberry/green onion salad from some frozen rice. Rob used some frozen chili up and Patsy worked on some frozen homemade refried beans. (I will go on record as saying that refried beans never get old at this house. That girl would eat them every day, but it’s nice to keep them fresh.)

What did you do this week to enjoy life while staying frugal?