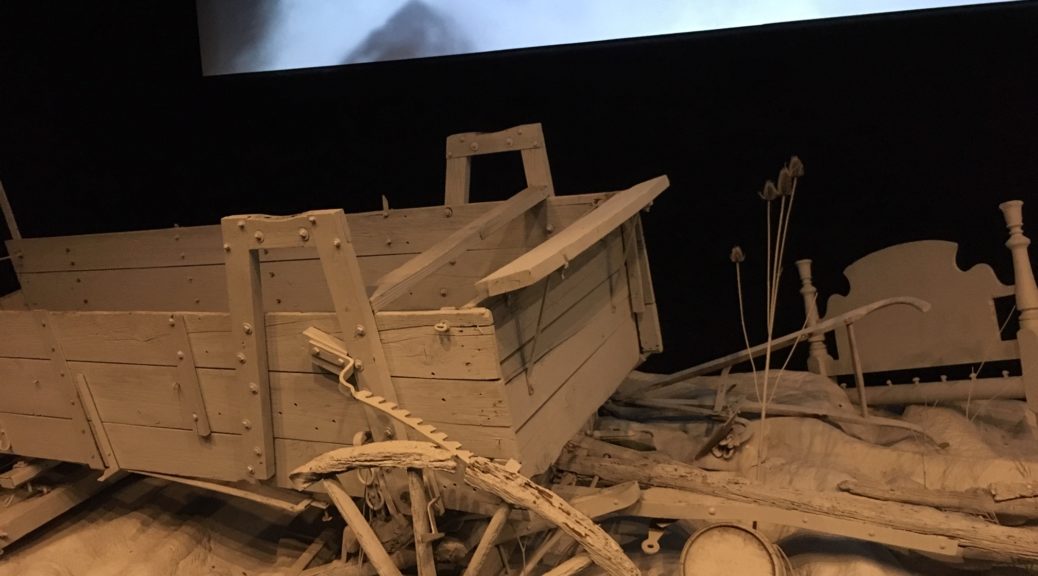 Today, we visited the End of the Oregon Trail Museum/Interpretive Center in Oregon City, Oregon. As the name suggests, it is where the Oregon Trail ended approximately 175 years ago. My sister set up a field trip there for both a group of homeschooled kids and kids who attend public school. There were 13 of them, including Michaela. It was planned for Veteran’s Day, since it is a school holiday for the public schools.

The kids we took had a blast!

They started having fun in the parking lot, and it continued. It was a gorgeous day.

We had a nice presentation by our guide, Bethany. We had pre-chosen the “Choose Your Own Adventure” presentation, so she let the kids decide what they would do under certain circumstances they might encounter if they were actually traveling the trail way back in the 1800’s. They loved her little voting devices that allowed them to push the button of their choice and then electronically transferred the information to the screen. After the informative presentation, they were allowed to explore that area for a while.

They moved on to a “Pack your wagon” activity.

The 3 big girls, with help from Alissa, really tried hard to figure out the best use of their 2000 pound wagon-loading limit. The littler boys just decided they didn’t need such things as clothes, just lots and lots of guns:).

The guide moved us on to butter making, where all the kids got to shake the cream until it turned into the desired butter, then they got to taste it.

Candle dipping was a real hit, as well.

Thankfully, there were plenty of grown-up hands to help the little ones. (Hard to believe Alissa counts as a grown-up now, but she DOES!).

The last activity was one in which they laid out ropes to “survey” their land on the big lawn outside. After each team “claimed” their property, often with lots of yells for others to “get off my land!” we were done with the official field trip. Rob had helped me pack a huge lunch for all 18 of us, and we relaxed in the picnic area while we all ate it. He didn’t go this time, which was a good choice since there was a lot of walking.

The kids ran and played on the big lawn after lunch. It was a great day for everyone. They had a blast while learning so much. One of the little boys confided in me how much he loved days where he didn’t have to have school–like this one!

We did do some money-saving activities during the week.

I cooked our meals, using the sale items from the grocery ads, coupled with items from my freezers/cupboards, etc. I did nothing earth-shattering, just made good, plain food. I sent Rob to some stores, and I went to others, and bought the best deals from each place. I hadn’t shopped much for a few weeks, and it caught up with me this week. I’m stocked up now for a while.

I wanted to make a small project and found everything I needed in my stash of fabric. We were also able to find everything my daughter needed for her project, except the stuffing, which my husband bought at the thrift store.

We used our membership at the Croc Center. Since the YMCA closed down for a re-build, we were transferred over there. We haven’t used it much, as it is a bit out of our way, but we are trying to use it more. Rob takes Michaela there at least once a week to swim and we join her when we can. I’ve taken a couple of exercise classes there, as they are all included in our membership. We are still on scholarship from the Y, which I thought was very nice of them all. We do pay each month, but it’s a reduced amount.