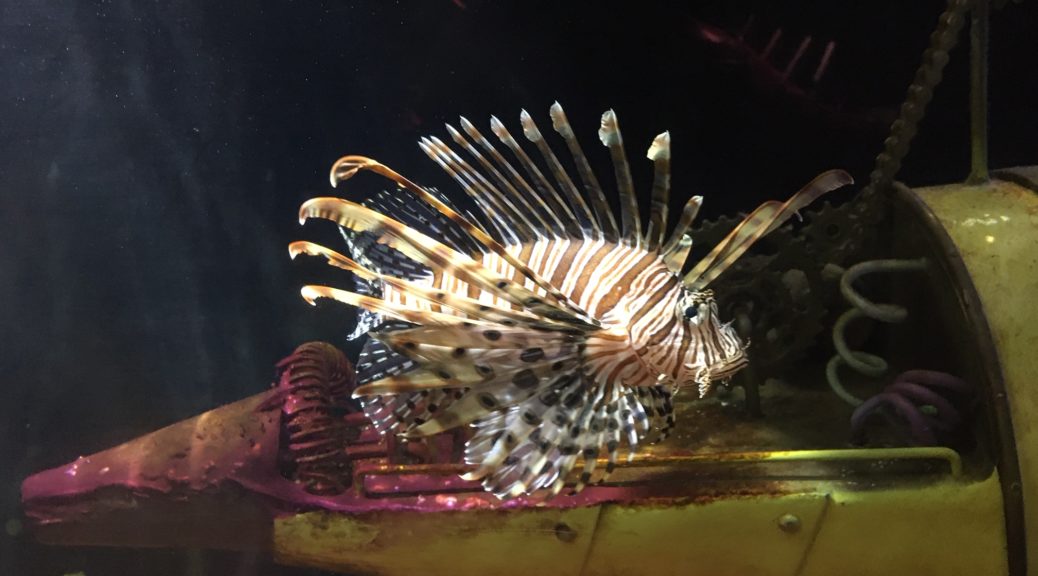 We took the kids to the Oregon Coast Aquarium this week. We have a zoo pass. The reciprocal attraction for the month of November was the Aquarium. We eagerly set a date to use this amazing deal, because I had not been there for many years. Our niece, Caitlyn, went along, too. She has a zoo pass as well, so her admission was free also. We saved over $130 in admission costs. We all rode together in the van, and saved gas, as well. It was so fun!

We packed a lunch, and then stopped for little snacks like sea foam candy, French fries….you get the idea.

It took a lot of photos to get one of Michaela with a shark behind her, but that was her hope, so we persevered until we captured it!

The jellyfish are always a favorite of mine.

Patsy and Jake went in the hurricane simulator. They were the only 2 brave ones, but they had a blast.

There were so many interesting fish and other sea creatures.

The week was an extra busy one. It started on Monday with the field trip to the End of the Oregon Trail Museum. Then, on Tuesday, we needed to feed the college group at church, as we occasionally do. We made 3 kinds of soup, corn muffins and lemon poppyseed and raspberry bars, all from boxed mixes that I got on a great sale. It still took several hours to cook, but wasn’t hard to do.

In the meanwhile, Patsy was cramming schoolwork into every extra moment, since we were gone so much. We have a week’s worth of school to get through each week (right?), and I’m happy to say she did get through it by Friday. Some weeks she gets done sooner, and does hands-on activities on Fridays, but not this week. We were too busy with other things. That’s the beauty of the the flexibility of homeschool.

Jake had an event at his school Friday night. We had him for the entire weekend, so, it fell to me to take him. There was a raffle. He won a prize– a game. Amazing! I was extremely surprised, but oh, so happy, when they called his number so we could head on home. He had done what he could do at the event, and was just sitting on a chair, nervously chewing his ticket, in hopes that he would win. I’m not sure who was happier, him or me!

Last night, the sweet boy threw his pants into the laundry, as he should have. He did not remove his precious Pokeman trading cards from the pockets, which he also should have done. So, they got washed. :(. Oops! After agonizing over a solution for a while, Uncle sneaked the soggy cards down to a gaming card shop this afternoon so he could match them, and replaced the ruined ones that he could get for a reasonable price. He got all but 2. He also got an extra packets of cards. He then explained the situation to Jake, immediately handed him the new cards, and thereby avoided a huge vale of tears and a valley of sorrow. I never would have thought of such a solution, but I’m glad Rob did. Thank goodness there were only a few in those pockets:). If you’ve never had much to do with special needs kids, this action will not make sense to you. If you have……no explanation is needed:)

We had a family birthday party today, and I made a couple of salads from ingredients I had on hand. They were potato salad and quinoa salad. Yum!

I worked on some projects for Christmas and a sewing project for Patsy.

Rob did, too. (And, no, it’s not quite finished. The yellow lines will be gone!). The people who get these gifts do not read the blog. I’m not putting up pictures of the gifts for people who do. Just in case any of you are wondering:).

I cleaned a little here and there. I cooked a lot. I got a little creative, because we seem to be emptying out the fridge faster than normal, and I need to go shopping yet again. Tomorrow is soon enough, and we made out fine, using some ingredients that had lingered for a while. Win-win! Some weeks/months are like that!

I redeemed a few more Ibotta rebates. We cashed out most of the Ibotta money I’ve been saving and plan to use that plus the Bottle Drop money for groceries in the next couple of weeks. I usually buy extra in November anyway, since there are so many great deals.

My sister gave me a free turkey she had obtained. My Mom bought me one of the 68c/lb ones from Winco. (If we want to be technical, she gave me the $ and I did the actual shopping while I was out, but now I’ve got turkeys for both Thanksgiving and Christmas tucked away in the freezers).

The coming week promises to be a little less scheduled with outside activities. I’m glad we did our fun events while the weather was so nice. I’m equally glad that this week will give me more time at home. There is much I want to accomplish.