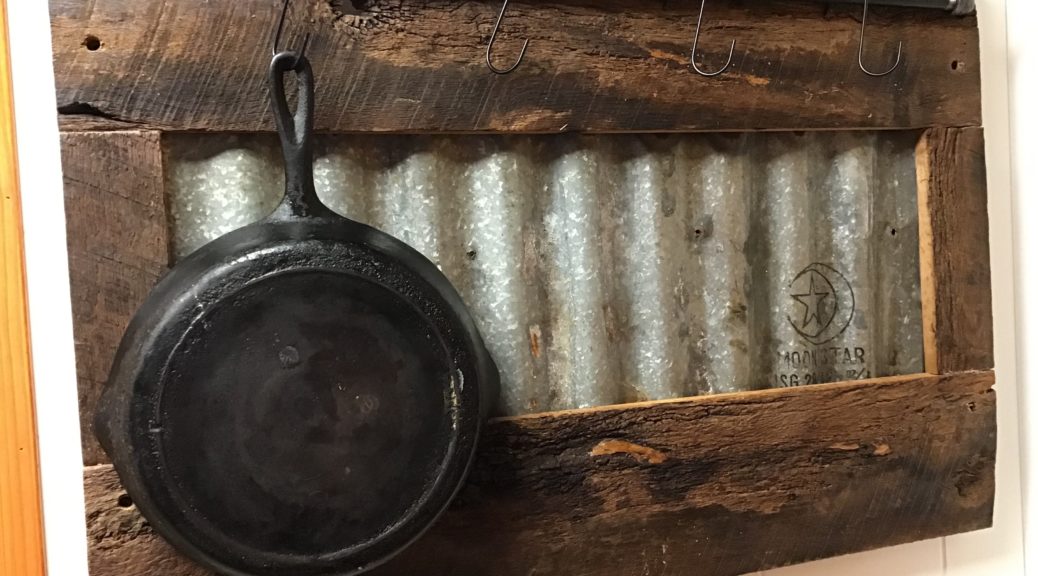 This is one of my favorite Christmas presents. Rob built me this rack for my cast iron frying pans. He used reclaimed lumber and a piece of tin he also salvaged. This picture really doesn’t do it justice–it’s amazing! Another gift he made that I really like is a bundle of garden stakes. He painted the ends white so I can write on them with a marker and mark my rows. He also used re-claimed wood for those.

I had a lot of help with the table decorations this year. Rob made me the wooden tree, the small wooden trees and found the right ribbon for me. Little Danait (a 5-year-old friend) carefully arranged the chocolate Santa candies the best way she knew how. I had given her a bag of candy and told her to spread it along the table–thinking she would sprinkle them here and there. She liked a line better. I left them, and people ate them! I even remembered to light the candles I dug out of the cupboard.

I used things I had for decor. Patsy made snowflakes to put on the table. I found a stash of candles in a bin in the shop that had never been unpacked when we moved. I used a ton of them!

Lovana made a chocolate-peppermint cake. Yum! We served tacos for our meal–buffet style. Everyone brought parts and pieces. We had taco bar, shrimp, other desserts, Eritrean food including injera and spicy lentils and African beef (I think it is called Coal-wa or something similar), and mashed potatoes. At one point, I made Michaela some cinnamon-sugar toast–that’s what she wanted. As far as I could tell, all 27 people were happy with the food, and everyone seemed to have a really good time. Since I spread them out all over the house, they had enough room–some in the living room, some in the garage, some in the kitchen, and even a few at a table in Patsy’s bedroom–mostly kids. We had guests that we had never met before, along with family and friends that usually come. They were all good sports. So fun! Since so many pitched in to provide parts of the meal, it was not a burden for anyone.

There were not a ton of leftovers after Christmas, so we ate what there were and I’ve been cooking. I was given 2 Butternut squash for Christmas. I cut them both up and we’ve already eaten one of them. I will roast the other one very soon.

I made Puffy Green Bean Bake from the More With Less Cookbook. Twice.

I shopped for a few groceries. Eggs were 99c/dozen. I bought the 3 dozen I could. I boiled a bunch for snacks, lunches and breakfasts. I also got the random items I needed, such as seasoning salt, and milk. I stayed around $50, which I thought was great for my weekly shopping, since we had 5 extra people for 3 days, and the Christmas meal.

After all my guests left, including the ones that were staying here, and the ones who came over the day after Christmas, I was pretty tired. I rested a lot , but am now feeling like myself again. It was nice today to go to church and have our regular family Sunday dinner. It was great that baby Allie and her parents could join us today. She’s grown so much. I will admit that I saw the baby very briefly at church on Christmas Eve, but she was more sociable today and I got to hold her, which is always a treat! (This little girl is like a grand-daughter to my sister and brother-in-law, as her daddy is like a son to them. So, by default, I get to be an auntie. My pleasure for sure!)

My sister did all the cooking today and we had soup and sandwiches, so I got a big break from cooking, and so we brought Jake home for the night. I haven’t seen him much this week. We miss our extra boy, so it’s our lucky day:).