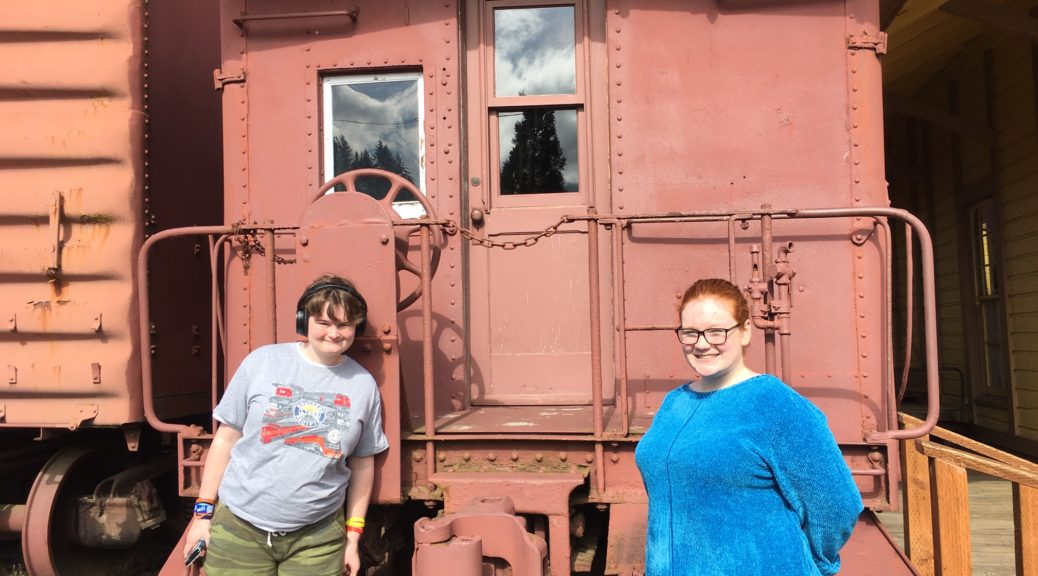 I have been playing “catch-up” at home this week. One of Jake’s big sisters took him to Disneyland, so we hung around with Michaela and I cleaned the house at every opportunity between things. I folded SO much laundry yesterday, but….what do you know? There’s more today:).

One day, we went on an excursion to a museum, as a special treat for Michaela. We had randomly come across this museum a while back when we had Jake out for a drive, and thought of how much Michaela would enjoy it, because she loves trains so much. We mistakenly assumed it was all about trains, since it was in an old depot, and had numerous boxcars.

In fact, it had a small section about trains and a lot of history about the surrounding area. We loved it! There was an actual covered wagon that had survived crossing the Oregon Trail, and the true story of the people who had traveled on it. There was a lot about the African-American influence and early settlers in the area, which of course interested me because 2 of my daughters are black. One section told of the Native American from the surrounding area, and Michaela seemed to really enjoy that section–we read and discussed every picture and signboard. She was especially interested in the picture and story of a modern-day man, who was keeping the traditions alive for his people—she just loved knowing he was still alive today–she was fascinated.

If you even get a chance to visit the museum in teeny-tiny Brownsville, Oregon, it’s worth your time. The cost is minimal–donation only–and there is a little gift shop where Michaela bought herself a t-shirt (with permission from her Mama) and Patsy got an adult coloring book. Rob dropped a few dollars in the container provided, and we enjoyed our drive home.

We had a 4H meeting, even though Jake was gone. It was a gorgeous day, and we concentrated on Outdoor Cooking.

Rob built a fire, lit the BBQ and unearthed his Dutch Ovens. The kids chopped and chopped and we made….

a chili-cheese dip and then…

the kids roasted every single hot dog we could find in the freezers and fridge! They had so much fun last time we did that, they wanted to do it again. Rob said, ” Why not?” and started the great hot dog search. It WAS fun:). Next time we will have to buy some S’More ingredients, and a big package of hot dogs. This time, I put out a big bowl of oranges and bananas. Everyone ate like the ravenous children they were, and Rob hauled the older ones off to Wednesday night church, while I tidied up in the almost loud silence that remained!

All of this fun was very inexpensive–the sausage was on super sale for $1.99/package, the potatoes, carrots and onions were on hand, and the peppers were inexpensive, too. Next time, it will be even more inexpensive, because I find that this crew isn’t fond of peppers, so we will not buy them again for this purpose:)

More flowers bloom each week. I love looking at them. I was able to do a couple of hours of yard work this week.

I made some lemon-poppyseed muffins. I froze a bunch and shared a bunch. Rob made waffles and froze what the girls didn’t eat for lunch today. He made spaghetti sauce and spaghetti pie. I made some soup and we bought a Costco chicken. Those are sure worth the $5 in my opinion. There have been lots of salads in our meal plan lately, since Rob is trying to maintain his weight and even lower it a bit in light of his upcoming surgery.

He’s been going to the pool quite a bit and using the water weights to pull himself around the lazy river to try to get a little exercise. He cannot use his legs to swim, due to his hip issue, but this seems to work. Patsy and I go along when we can.

Patsy and I have been really cracking the books, getting large amounts of schoolwork done. There have been a few things that have been neglected a bit over the past few weeks because I’ve been so busy, but it’s only a matter of a few hours to get things back on track. It gives me great satisfaction to know we are where I want to be on school.