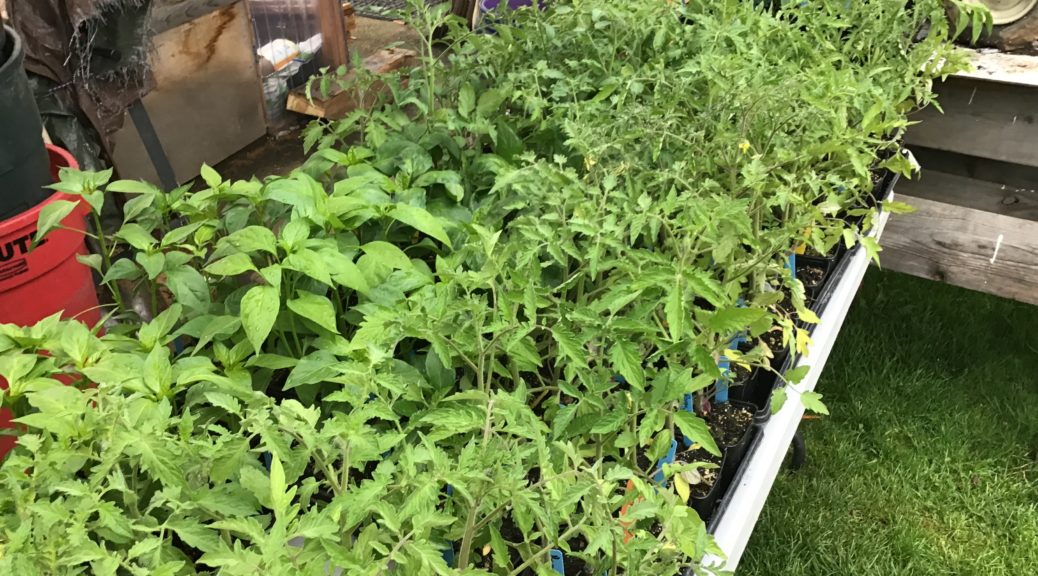 Rob’s tomatoes and peppers are looking insanely good! He’s starting to harden them off. It will be a while before it’s time to plant them out, but when it’s time, they will be ready. We are having such an early spring. It won’t be long.

This turned out to be a good week for me to work in the yard and garden. I weeded for hours. Several bags of compost/steer manure were spread in different places. My soil is quite poor in the flowerbeds and the garden always needs ammending.

The new compost bins Rob built are in place against the fence and quite a few buckets of weeds have been put in them already. The old compost bins he made last year have been organized. I moved any un-decomposed weeds from the top of the pile on the right to the left. Now, everyone has been instructed to leave the right hand side completely alone and not add any new scraps or weeds. I am going to remove the nice compost from that side very soon, and spread it over the corner of the garden. The slats come out of the front of the bins, making it easy to shovel the rotted compost out. Then, I will instruct everyone to put new debris in the emptied side, and let the left hand side finish.

Last fall, I dug up a small corner of the garden with an old-fashioned shovel, added a bag on compost/steer manure and planted a few snow peas and beets, along with a few green onion seeds. The beets flopped for the most part, but the snow peas are about to fruit and there are a few green onions. It was a successful experiment. I can’t wait to eat some.

I’m getting a few artichokes. They are quite small, so I fertilized them, the raspberries, the blueberries and the strawberries.

We received one day of much-needed rain. I was so happy to have one day where I didn’t have to lug water out to the garden to hand-water my tediously planted baby onion plants, tiny carrots and beets, and lettuce. It’s been so dry this spring. Later, when the garden is fully, we will run the sprinklers over it all, but the system isn’t set up yet. We have to get the hoses out, set up the sprinklers, etc.

Patsy made another mason bee house. Being Patsy, she painted it purple. The mason bees are working busily in the houses Rob built and put up. They are already filling the straws with mud and new offspring. They are also very busy pollinating all over our yard.

My sister sent over a beautiful hanging pot of flowers.

Rob dropped some baby veggie starts on her doorstep. It’s been difficult to not be able to really see and visit with this particular sister, so we’ve had to be creative with texts, visiting from a wide distance, and phone calls.

Michaela was getting very restless, so Rob took her for a drive. They drove around and dropped things on people’s doorsteps (like my sister) and looked for trains. Sadly, they were working on the tracks, so they didn’t see even one, but there’s always another day.

We had the kids over for a “party.” My sister needed to work 2 days this week, from home, and we wanted to take the kids somewhere to give her the peace and quiet she needed. Our house is the only other place they can go right now, since we are back and forth so much, we consider ourselves as one small circle, and our work with them is considered necessary. So, we got out the 2 kiddie pools we own and put water in them. They used any and all water balloons we could find from either house. We ran the yard sprinklers so they could run through them. Rob build a fire in the fire pit and we roasted hot dogs, marshmallows and Peeps our niece, Alissa, brought over. We made ice cream cones and decorated them with M and M’s and gummy bears. They were so tired, they came inside and I put on an educational tv show about wild cats, which they watched as if in a coma, then went home where their dad said they had a great, exhausted evening, and fell into bed. I confess, I fell into bed at 8:30 as well, since we’d had Jake for 2 days and one night. The girls just joined us for the second afternoon. Of course, Alissa just joined us for the fun of it, and to help out. Since I homeschooled her for 3 years, it felt very right to have her over here for the afternoon. I miss her now that she’s getting so grown-up and busy with her adult life.

We needed to get produce, and some other groceries. One day, I went down to Safeway. I took the little handful of Monopoly tickets I had received weeks ago, not really knowing if they were even doing that game any more with how busy the stores were. They were. I was able to get several free items, such as gummy bears, French bread, and extra tickets. Some other people did not want their tickets, and so I brought them home to Patsy. She and Jake worked for quite some time un-wrapping them (bless you people who shared!). They got quite a few free items. I wasn’t sure if we were going to redeem them, but to my chagrin, I found I had forgotten something very important, and Rob had to go back and get it that evening. So, we were able to get them after all. We got a brick of cream cheese, several donuts, a box of pasta, and another handful of tickets.

Rob has done a little shopping here and there, getting things to fix things around the house, things for the yard, a few groceries, etc. I took Lovana shopping, as she doesn’t drive. I’m hoping we are all set up for a couple of weeks again, now. I’d love to go a month, but I will probably not be able to make it that long, due to the fact that I always need produce since Rob is still working hard on maintaining his weight loss.

They called and rescheduled his surgery for June 29. If the virus erupts here, of course they will postpone it again, but we are hopeful, so it’s even more important that he be the correct weight.

I was able to take the scraps from Patsy’s skirt and make a little summer sundress for my little friend, Danait. The pattern was one I’d had for years and the trim was from a garage sale years ago. There was an extremely long piece of it, bought for a very low price, and I’ve used bits of it several times over the years. I was delighted to use some more of it and to finish up the blue print fabric. The entire dress cost less than $4, and I had a lot of fun sewing it. Rob, Michaela and Patsy dropped it on their doorstep, along with a few Easter items, and visited briefly from a safe distance. I was working, but was glad they could take my love.