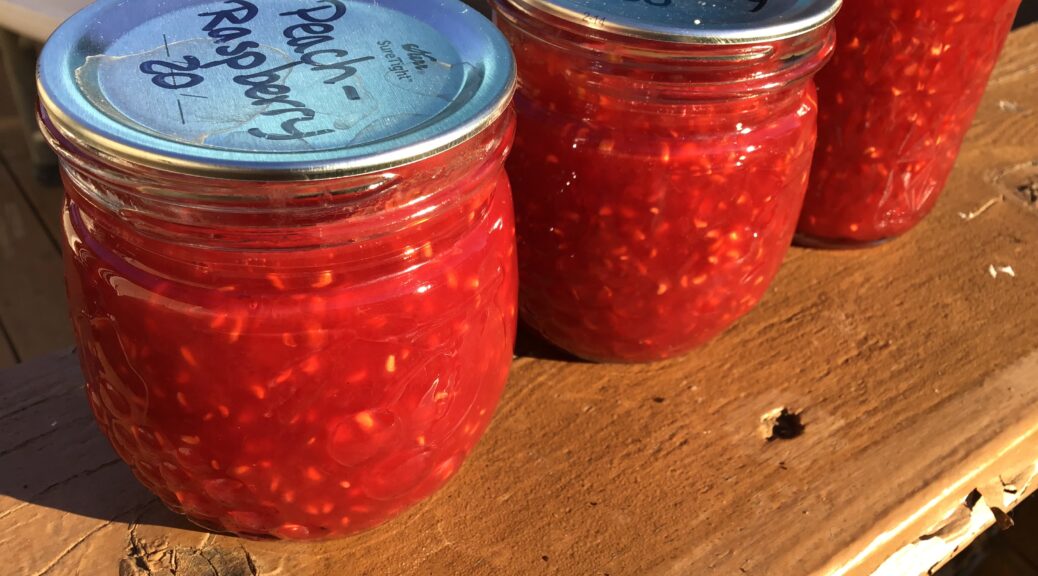 I’ve been picking so many berries that we decided to spend a morning making jam on Monday. For this batch, I used frozen peaches and a few frozen raspberries, along with the pan full I picked, to have enough for the batch.

I had to get out the pizza pans to hold all the Marion (black) berries one day. I froze these and picked that many more another day. Those I made jam from. There are still some every couple of days, but I don’t think I’ll get as many at one time again this season.

It’s been sunny and warm, and sun tea has been made several times.

Last week, various family members came Monday, Wednesday and Friday to help me out. We weeded, did laundry and baked at various times. This week, I haven’t needed anyone to come help because Rob is back to driving, as of Monday. He’s also doing dishes, folding laundry, cooking a bit, and doing his therapy. Every day, he does the exercises multiple times, and we are taking 1-2 walks of various lengths, but mostly .7-1/5 miles. I’m still amazed! We see the doctor tomorrow, and I’m excited to see if he thinks Rob’s recovery is as amazing as I do:)

I hadn’t shopped for over 2 weeks. and didn’t need a thing. Until I did! All of a sudden, I ran out of lots of items, mostly staples such as onion powder, red pepper flakes, raisins, odd things like that. I went to a couple of stores, and also decided to place an Azure Standard order, since Rob was doing so much better than I though he would be. I took him to see his mother for a visit, as she was wanting to see him after the surgery, then picked up my order, as my drop is in the same town as she lives in. It was great to get him out. He was going crazy!

Which is why I loaded Rob, Patsy and the dog up and drove to nearby Silver Creek Falls State Park. We found a concrete trail that we could feel comfortable with Rob walking down, quickly slapped a mask on if anyone came near, and walked about a mile. Of course, we were not able to walk the trails to see the falls, yet, but had a wonderful time anyway.

Of course we had to cross the bridge, and Rob was careful to keep his trekker pole tips out of the cracks, since we saw where some other poor person had lost theirs!

There were quite a few people there, so after our walk, we drove down to a place where few people were and chose a picnic table. I cannot express to you how wonderful and different it was to choose a table that was a little ways away from the car, next to the creek, not the one right next to the car. Rob easily navigated his way over there, was able to sit up and down at will–something that has not happened for years, and was able to take a short walk when he needed to! And, better yet, looked baffled for a minute, because the idea suddenly struck him that life was different now, and then said, “I’ll come back in a minute. Because I can.” Every single time he stood up and sat down before surgery was so painful, that he would just go the smallest possible distance, sit down, stay there until time to leave, then go straight to the car. Every decision was based on how far he would have to walk and how many times he would have to stand up and sit down. This is so different and amazing! We don’t take it for granted, and are praising the Lord every single day for the blessing this surgery has been for Rob.