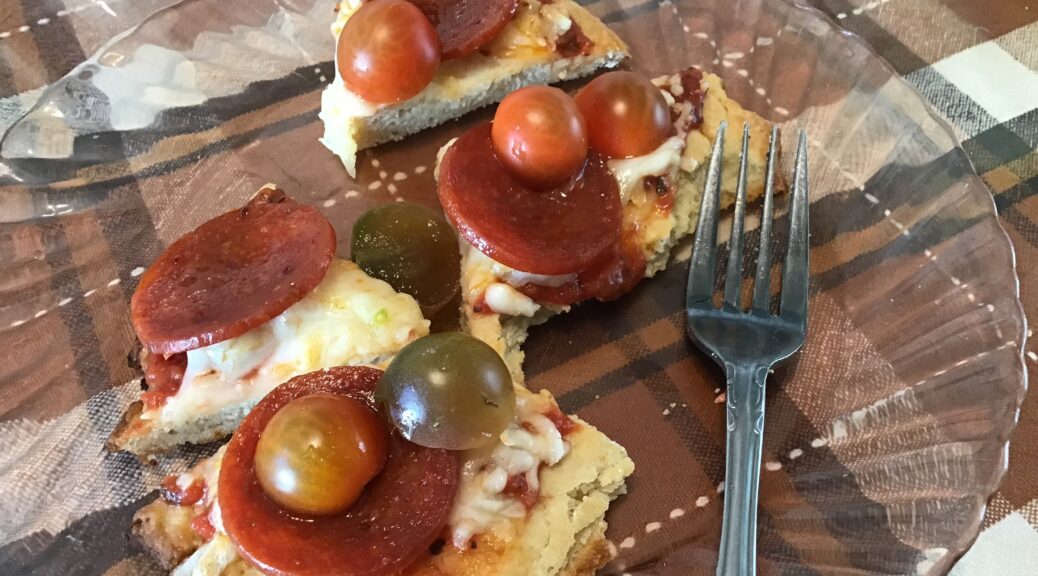 I tried out a new pizza crust recipe this week, and topped it with some cherry tomatoes. I did tweak it to make it gluten free. I want to try again and make a few more changes, but this was pretty good. When frost was threatened, I picked the green cherry tomatoes and put them in a 9×13 pan in the garage. They are slowly ripening up and we are eating them as soon as they do.

Rob has been finding some ripe larger tomatoes in his stash in the shed. They are wrapped with tissue paper, and ripening slowly.

We still have some things growing in the garden that are not frost sensitive. We’ve had boc choi in stir-fry. The “Quick Start” cabbage has made heads. They are small heads, but just right for us. I’ve picked several and there are still more out there. We had broccoli a few times this week, too, in various stir-fries. I made a beef-broccoli one for dinner one evening that was delicious. The celery isn’t doing well–it’s too dry, I think. The winter lettuce is growing and there’s kale, which is very hardy. The spinach is so tiny that I doubt I’ll get any before spring.

We’ve done well this week at eating up all the leftovers. We ate a lot of salad and used most of the lettuce I picked before it frosted.

I’ve had to water the veggies with watering cans, it’s been so dry! That’s very unusual for our part of Oregon this time of year.

Rob went ahead and tilled the empty part of the garden one more time, since it was dry enough, after I pulled up the last few dead tomato and zucchini bushes. It will help the weeds be more manageable in the spring. He also tilled in some grass clippings while he was at it.

We went for several walks. One day, when we were keeping Michaela and Jake, we went down to Waterfront Park in downtown Salem and all took a nice walk. The weather has been amazing!

The wood project continues. Rob went up to the forest several times again this week, and the piles continue to grow.

While he cuts wood, I’ve been sewing and doing school with Patsy. There should be more projects to show in a few days. When her school is done, she goes with him. She enjoys getting out of the house! I’m not sure how much more he’s going to cut, but I’m loving the fact that he’s got so much piled up already.