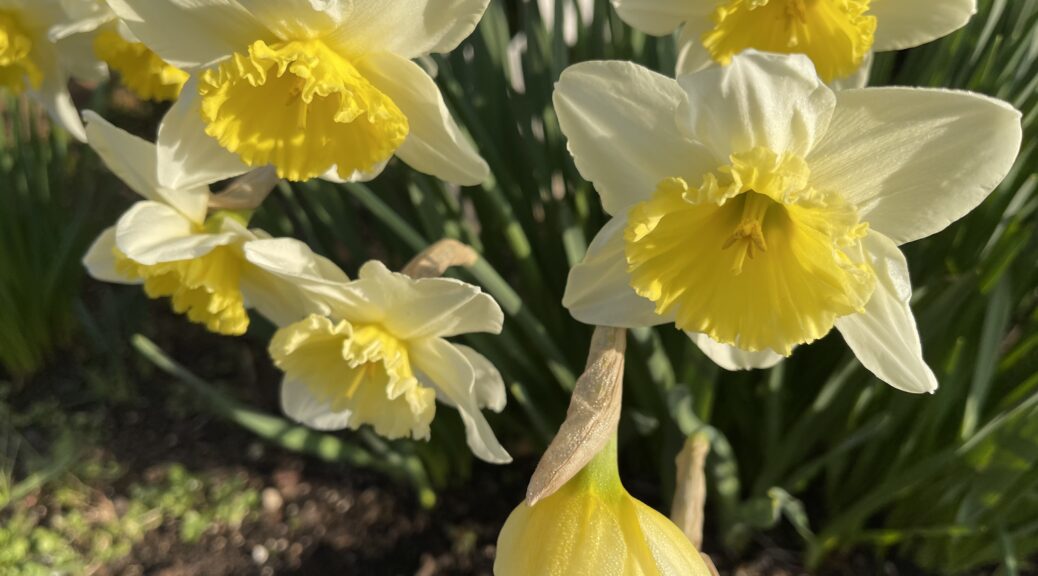 We have had some very mild weather this week. I took the opportunity to weed out the raised bed I planted last fall. It’s been covered with plastic over wood frames. We removed them, I weeded and planted, then put the coverings back on.

Kale, lettuce, boc choi, parsley, chives and a few scraggly snow peas wintered over. I planted tiny Quick Start Cabbages, Noble Spinach, lettuce, snow peas and some cilantro. I covered 2 of the cabbages with milk jugs to see if that speeds them up even more, as I’m down to my last couple of cabbages from the winter garden. The walnut shells are an experiment. Hopefully, they are sharp and the slugs won’t want to crawl on them.

I planted climbing sweet pea flowers behind the baby strawberry plants in my new raised beds in the side yard. There are a few bush snow peas, some green onions and a space for a very small patch of something else, still not decided on. In the far raised bed, there are Sugar Snap peas in the back that will grow up the fence and Maestro bush shelling peas in the front, filling the entire bed. It takes a lot of shelling peas to get any! The sweet pea seeds and the bush pea seeds are a bit old, but I wanted to give them a try now that I have a fence they can climb, if they grow.

Today, Rob took the fig tree down. It was in the front yard, and now there’s a huge mess! He did it gradually, though, starting with his pole saw, so I could pull branches away as he downed them. No cars were hurt, no power lines damaged and nothing hurts except our muscles. Boy, do they ache after using some that had clearly not been used for a while! We started that project right after we got back from a 2 mile walk. Not sure we thought that one through:). We will work a day or two more this week to get it all picked up and dealt with. Firewood was moved to another location to be loaded into the shed when the old wood is used up. (There’s some old wood in the back of the shed that needs to be used this year, so we can’t put new wood in front of it.)

Right at the end of the project, Rob’s bigger chain saw died, so he could not quite finish. He has already been watching U-Tube videos to see how to fix it, and also called a guy he knows for advice. We borrowed a trailer, and Rob and our next door neighbor will do a group dump run because neither of them have enough junk for a full load. They will split the dump fee that way. Then, we will fill the trailer with all these branches and he will haul it to my sister’s farm where it can be burned and return the trailer. The tree was very messy and dropped many, many leaves and unappetizing figs. (I think there are other varieties that taste better than this one.). A large piece of the tree broke off this winter, and part of the rest of it was rotten. It was time for it to go, and I won’t miss it. I will miss the interesting birds that came to eat the figs. I think my Sweet William, hydrangea and other flowers will do much better with more light. Even if we could have found an arborist who had time to come (they are super busy cleaning up after the ice storm), we wanted to do it ourselves to save $. And, although they would only charge $15 to dump a load of branches at the dump, free sounds like even a better price:) and Rob needs to drive that direction anyway to return the trailer.

Rob has been busily transplanting his seedlings. He has SO many this year! At last count, there were over 100 tomato seedlings of many various varieties. There are many old tried-and-true kinds and some new ones we wanted to try. He is growing starts for my sister’s garden this year and has several other people he wants to share with.

Jake and Michaela spent a lot of time over here this week. One day, Rob took Jake and Patsy to a park. They had a blast, and I love how Patsy looks in the dress my friend gifted her! She gave Patsy several clothing items she didn’t need anymore, and several of them fit, making Patsy very happy.

Uncle took Michaela to get her hair cut. It was her first time back in a salon for over a year. Grandma’s been keeping her trimmed and tidy through Covid, but she was excited to get back to her regular routine. She loves nothing more than having Rob drive her here and there and to have appointments and activities to do. He also took her to Horses of Hope, where she gets to either ride or interact with various therapy horses.

She also went with him to pick up pork from the meat shop. (She calls those kind of errands country drives and looks for trains, McDonald’s and Dairy Queens whenever he can drum up an errand that’s a little distance away). A man we know who raises pigs had 1/2 of a small one he could not sell and offered it to us for the price of cut and wrap. We gratefully accepted and it is residing in our freezer now. It was about 80 pounds of meat, and it ended up a little over $1/lb for the cut and wrap fees.

And, what would my blog be without babies? We were blessed to be able to spend some time with Rob’s family–the first time in over a year. We had not seen a couple of the family members for over 2 years, and had never seen the youngest baby.

It’s crazy to think of, but both of these little boys are Rob’s great nephews. His nephew’s son is 2, and niece’s son is 1. They were born almost exactly 1 year apart from each other. There was a birthday party on Sunday afternoon. I had never met either little boy, so spent some time crawling on the floor, getting acquainted. The older little cutie has seen Rob before, and spent the party pointing his little finger at Rob across the room saying, “That’s Uncle Rob!” So cute:). Although Rob has occasionally been able to see his mother this past year, it’s been very limited, and even more so for me as we have so strictly limited our exposure to her, as she is in her upper 80’s. I was able to have a nice chat with her, and I enjoyed catching up. She heard Rob was raising plants and told me she had told some people at the party that they no longer needed to buy any, just go see Rob:). Good thing he has a lot!! He really does have some to share, so that’s good.

Now that so many in that group are vaccinated, we felt comfortable accepting the invitation. I did notice people keeping their distance more than they used to. This pandemic has changed us all in small ways, as well as the large, more obvious ones.

We were able to go to church again this Sunday. The girls wanted to go, too, so we picked them and our grandson up and hauled them along. The baby was great. Once again, he fell asleep on Rob for the sermon. The cutest thing was he woke up at the end and when Rob held him up during the last song, he started singing little baby praises with everyone else. So sweet!

I’m looking forward to getting outside more this coming week. There are so many daffodils blooming now. I’m loving them. I’ll try to get a picture of the front of the house where Patsy planted so many bulbs from my sister’s yard a few years ago. They are just about to burst into bloom. They should be lovely in a few days. Every year, we try to buy her a small handful of “fancy” daffodils to put in there with the others, and I’m interested to see what came up from this last batch. Hopefully, that ice storm was winter’s last hurrah, and spring is here to stay!