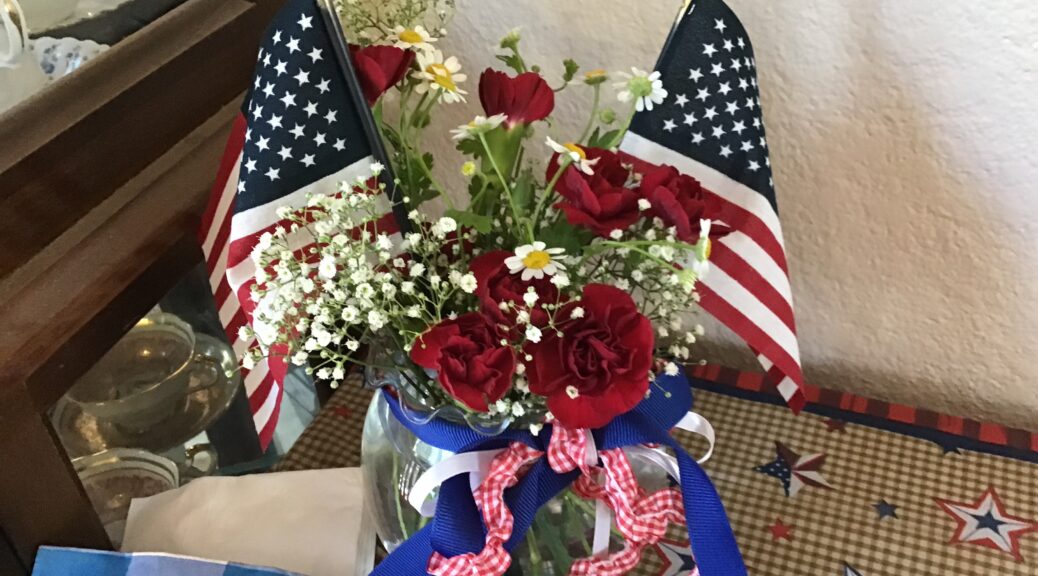 We have had a crazy 2 weeks since I last posted. I know we seem very busy most of the time, but these 2 weeks were amazingly full of activity.

We planned and carried out a 4th of July party, combined with 3 birthdays. Rob’s mom and my mom both share the same birthday. One grandma is 89 and the other 80. Our grandson has his birthday the very next day and he is 1. These birthdays are all close enough to each other and the 4th to celebrate them all on the same day. So we had the “2 Grandmas and a Baby, 4th of July Birthday Bash.” We set up the back yard for lots of people. There were lawn chairs under the awning, along with a table full of desserts, drink coolers full of lemonade and water along the bench, along with sodas. All of the food was inside of the house and there were several places to sit for those who didn’t want to be outside in the near-90-degree heat.

We were delighted that some of Rob’s relatives were able to come from a great distance to help celebrate, along with all the people who live nearer. It was a huge success. People were ready to see one another after being apart for so long.

The baby scarfed his cupcake in a most satisfying manner. The grandmas ate their dessert more politely, although we all decided that they could eat it any way they wanted, due to their advanced age:). I made them each a cheesecake in my Instant Pot to put their candle on and we decorated them with berries from my garden. There were also some great brownies that showed up, along with some cinnamon rolls and the tasty cupcakes, so there was plenty for all.

I made 4th of July Krispie treats, but all my houseguests, niece and nephew and Rob, Patsy and I ate them all up before the party even started. Oops.

Rob BBQ’d teriyaki chicken breast, a huge trout he caught recently, shrimp skewers, hamburgers and hot dogs. Many, many pot luck side dishes, drinks and desserts were brought. I made coleslaw from a huge cabbage I grew, lettuce salad, mixed veggies with rosemary, olive oil and other spices cooked on the grill by Rob. I had a huge tub of ice cream as well to fill in the cracks.

Although it wasn’t my most inexpensive grocery shopping week, by far, I was able to use a $10 off $50 coupon as well as many good digitally downloaded coupons at Safeway. I was also able to use things like ice cream previously purchased for only $3 for a huge tub, my garden produce, meat purchased on sale, shrimp bought for only $3/lb a couple of months ago, and the trout Rob caught to keep the cost down.

Rob’s been wanting to sand and paint the deck for several years, but he wasn’t up to it until this summer. It was peeling badly and got very slick when wet. We rented a sander ahead of time for last Monday. Then it got hot. We broke the all-time record for heat in our city and reached 117 degrees here in Salem, Oregon. One day was 114. Several other days it “only” reached 104 or so. At this point it was too late to cancel without losing our money, so…..we carried on.

Rob worked early and late, trying to prep the deck before sanding. Then we all helped as he sanded on that blistering Monday morning. We were pretty quick with Rob running the sander and Patsy and I sweeping and holding the cord out of the way. He then painted it with 2 coats of textured deck paint over the next couple of days. There’s a little bit of hand painting to do still, and the bench needs painting, but what he did looks great!

In the meanwhile, the girls and baby moved in with us for the duration of the heat wave, since they don’t have air conditioning. Rob and I cooked like maniacs the day before they came, to have food that could be eaten cold or warmed in the microwave. The plan worked great until we lost power one evening. That night, we ate ice cream for dinner. It worked for me:).

After the heat wave broke, they went home. We spent one morning at their house chopping, trimming, clipping, weeding and so forth in their front yard. It was extremely overgrown and they asked for help trimming it up. I was sore after that! You’d think I do enough yard work that I wouldn’t have been, but I guess all that chopping used different muscles than hoeing.

I weeded and hoed for a bit each evening in my garden and yard, except a couple times that were just too hot. Today, my sister came and helped me weed for a couple of hours. Little by little, the job is getting done. The “problem” is that the warm nights and watering I’m doing are causing the weeds to grow super fast. I can hardly keep up. The good news is that the vegetables are, too. The heat ruined my peas, some lettuce, some spinach, and some snow peas. It annihilated most of my blackberries and burned many raspberries and blueberries. It encouraged some other veggies, though, and I have a few ripe tomatoes, zucchini and other things coming right along.

And, about those red lights…..

The 4th of July, the day of the party, we felt confident that we would be able to go to church, come home in plenty of time to do the last minute things for the party, and have a pretty relaxing day with all the relatives who were coming. About 6 am, we received a frantic call that our daughter was in labor. Rob rushed over there, collected our grandson, and took our 2 daughters to the hospital, one to deliver a baby and one to support her sister. She felt she needed to get there fast, and she kept saying, “Dad, just run that red light. Hurry. Just run that red light!” Thankfully, there wasn’t much traffic at that time on a Sunday/holiday, so he did. He dropped the girls off at the birthing center and brought Malcolm home to me and we figured we had a little time to calm ourselves down. Nope.

By 8:05 we had a new, precious grandson, delivered by emergency c-section. I rushed over to the hospital, my sister rushed to our house to help Rob with both the party and our grandson, and the day became a little more exciting by the minute. His name is Zaire. He was 7 lbs., 4 ounces and 21-1/2 inches long.

We’ve been enjoying having a little one around the house the past couple of days. He’s keeps us hopping. I am happy to help in that way.. Only one person is allowed at the hospital once they move the new mom to a room, and her sister is that person, so I’m just thankful I got there before they moved her out of the labor and delivery area. They will likely discharge her tomorrow, and I plan to hold new baby again then. I need to be here with big brother right now anyway.

I doubt our lives will become boring any time soon. With 2 babies exactly 1 year apart, I have a feeling I will be able to spend time with kids any time I feel lonely in the least, and likely some times when I’m not lonely at all:). I feel very blessed to be surrounded by all of these healthy, happy kids. They say it keeps you young to spend lots of time with young people. Maybe someone should start sewing me a baby blanket……