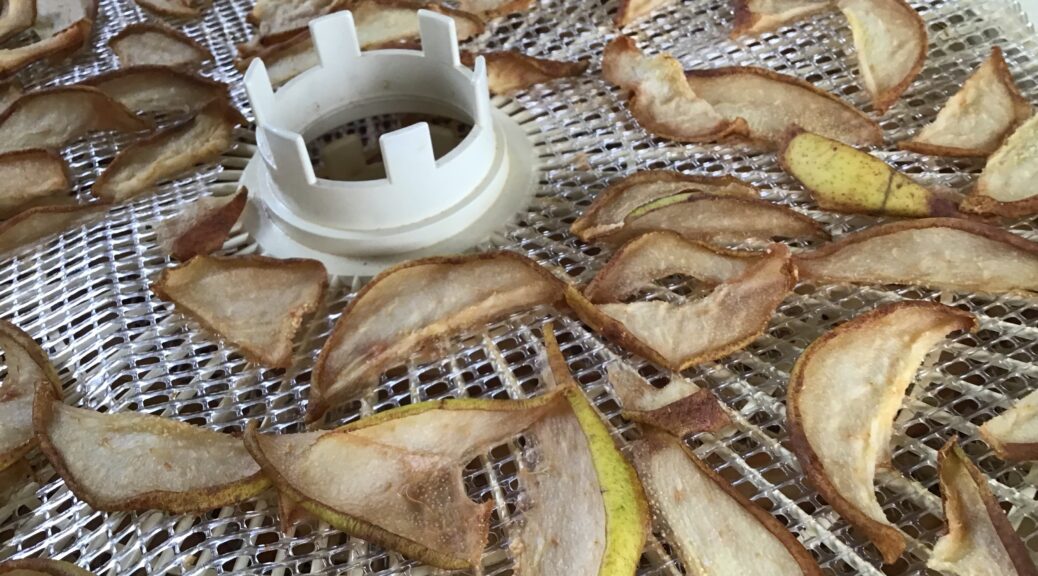 Once again, we concentrated on food preservation during this last week. The last of the pears went into the dryer.

I made German red cabbage and apples today, and one other time. Now, I have a lot! The last of the Gravenstein apples we bought went into that and they are officially gone as well. There is one more red cabbage in the garden, but the others were splitting and cracking and really needed to be used without delay–2 weeks ago! But, I did the best I could and got to them when I could. Rob specially grew the red cabbage for this purpose. I made this last year for the first time with the one red cabbage we grew and he loved it.

I pulled up all remaining beets and turned them into pickled beets. It was a great beet crop and we got around 20 pints. Some are for my Mom, and some for us. We had quite a few left over from last year, but the crop was outstanding, so I canned them up. We also ate quite a few fresh beets.

I’ve started on the salsa. I will do more in a couple of weeks as I didn’t get nearly enough, but it’s a start. (It is not in the picture) Peach pie filling used up the rest of the Elberta peaches we had picked at my sister’s. I’ve been making dilly beans with the extras from the pole beans. I’ve just mixed the purple and green ones. The red tomato product pictured here is pizza/pasta sauce.

Rob even froze some peppers. He uses them throughout the year, mostly for breakfast.

More dill pickles were made, as was another batch of Bread and Butter Pickles. Most of those will end up as gifts, likely around Christmas time. What I choose to give away at the holidays usually depends on what has grown prolifically during the summer, and, boy, are the cucumbers out-doing themselves this year.

Preserving food wasn’t all we did last week, though. I used some carrots that were starting to look bedraggled. Rob picked up a Costco chicken and I used the last of it to make this casserole.

I boiled the bones and made a huge pot of chicken-rice soup. I froze several meals worth in addition to what we have out for fresh eating. The rest of the chicken was eaten right away for meals, or put on salads. I also made a vegetable soup another day. It’s finally cooled down enough here for us to feel like both cooking and eating soup.

We watched our grandsons several times. One time, I wanted Baby Z to go to sleep, and he woke up the minute Patsy and I laid him in the crib, so I told Rob to lay down on the bed and I tucked baby up in his arm. Baby slept. Rob didn’t, but boy did he have fun watching Z sleep. Malcolm, on the other hand, would not go to sleep no matter what we did. He was having too much fun. So we just played with him.

Our daughter got a temporary job at the fair, working in a booth. Her older sister did the bulk of the babysitting, but we pitched in when we could with one boy or the other. Thursday evening, it was both, for quite a while. It took all 3 of us to keep up with him, but the boys were bathed, fed and happy by the time their Mama came for them. We, were exhausted, but happy, too. The fair is over tomorrow. I’m just glad she was able to work some extra hours and we were able to fit in time with the grandsons.. They are a joy to be with.

We had a slow start to school a few weeks ago. That just means I didn’t do all the subjects each day at first.. I homeschool Jake 3 days per week, and Patsy, of course, all the days. Each week, I’ve added a little more. That way works best with Jake, especially. We are doing “outdoor school” this coming week, so I have lots of fun activities planned. I spent quite a bit of time preparing this past weekend, but I’m ready now. Because our library is closed down again, due to the Delta variant, I was disappointed in not being able to get some materials I wanted. Thankfully, I have some books from the one time we were able to go in the short time it was open. I hit the motherlode at a garage sale this summer and got some books and teaching materials that I can use, so I organized all that along with the crafts and extra activities. At one place, I got a whole grocery sack full of books for $2. At other places, books were a quarter. I ended up with quite a few.

Rob got a few baby clothes at the Union Gospel Thrift Store. He found a Foley Food Mill in a “free” pile on the side of the road. A spare will come in handy.

All-in-all, it was a pretty good week+. My 4-page, double-sided list did not get all the way done. But, the wood is stacked and the canning that had to be done right away is done! I think the list served its purpose, but its time to generate a new one.