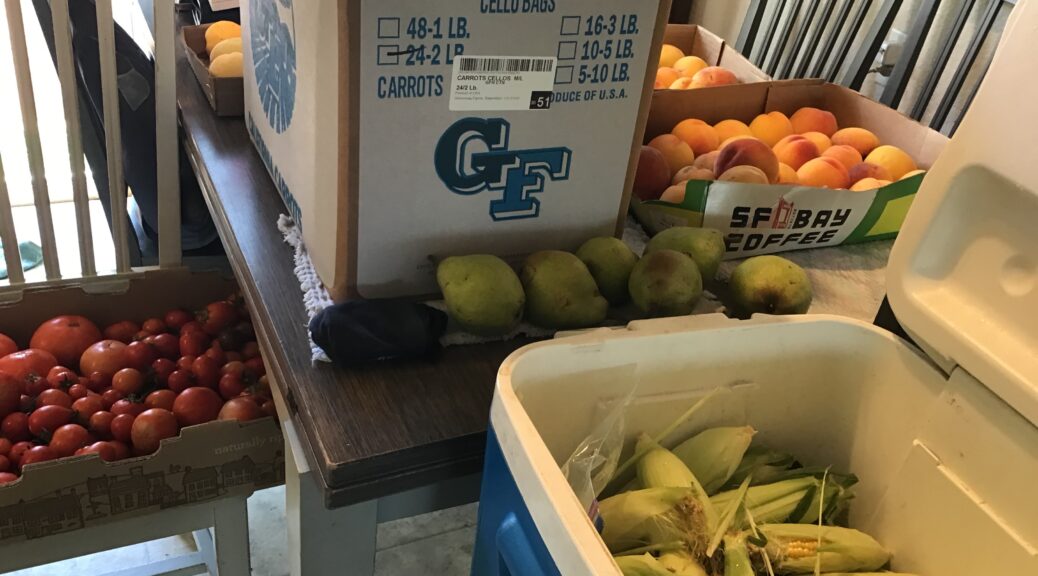 This past week, we were blessed with so much produce! My sister had already frozen a lot of corn from her garden, so offered us the extra. We happily accepted. (The pan of meatballs was something I made early Tuesday morning. Our mantra soon became, “At least we have meatballs,” as the week got busier and busier and my cooking got less and less!).

It was more than any of us thought. We ended up with 2 coolers full! She added some pears she was given, the Gravestein apples she had purchased for us at our request (she got everybody’s at once), some tomatoes from her garden, and lots of peaches. (The tomatoes on the chair are only part of what I got from my own garden!)

But wait….there’s more! The same day we were making plans to pick all the produce from my sister’s house, Rob’s cousin offered him two rows of corn they did not need. So, we went on Monday night to pick from my sister’s and he and Patsy went the next morning to get the additional corn. It was also more than anyone thought! It ended up being 3 rows. He got 3 coolers full of shucked corn! I cannot tell you how much corn that is. There are no words. And then, she gave him 3 boxes of tomatoes, which we were not expecting!

We canned 14 quarts and 36 pints of corn. We froze a bunch of corn. I made peach salsa and peach pie filling. I’ve made pizza/pasta sauce, canned whole tomatoes, diced tomatoes, tomato sauce so far. I still have a large bowl of Roma tomatoes to made salsa from. Thankfully, they hold well.

Little Z is obviously too little to enjoy corn like his brother does, but he sure grew in the short time that passed between visits.

I made 14 jars of dill pickles and 4 small jars of dilly beans from the produce from my garden. I canned 7 quarts of pears and we dried several dryers full. I also dried some zucchini.

So it’s a Very. Good. Thing. that we spent a few days down at the beach last week. We went camping at Ft. Stevens State Park. We spent some time with Jake and Michaela, and we spent some time completely alone since Patsy went to spend a couple of nights with their family at the condo they had in a nearby town. We had planned all along to swap kids back and forth a bit. Rob and I haven’t gotten away alone together for so long, I can’t remember. It was amazing and I got a LOT of sleep. I knew I was going to be busy when I got back, so I made a 4 page, both-sided list. Then all that produce showed up……Needless to say, I’ve only got a few items done from my list, but I’m thrilled to have all that canning done. Things are ripening early and so prolific this year. My October is going to be so much easier!

My sister and brother-in-law took us out for dinner. It was so awesome to eat at a restaurant. We ate outdoors and were delighted to feel mist coming down as we ate. At least Rob and I were. We’ve been so hot. It felt great, mostly because it didn’t last long. We’ve had a little rain here, too. It wasn’t much, but it’s not hot and miserable here anymore. Whew! What a great week for canning.

As always, we ate at the camper most of the time. I had pre-made food, as usual, and kept it very simple. I realized I had forgotten some things in my haste to take care of the garden produce before we left, but we made out just fine. I did send Rob to the Safeway for the 99c/lb turkey burger, along with new toothbrushes. There was a little mix-up. Someone used mine a couple of times before I figured out what was going on. I cooked with one turkey burger there, and saved the other one I was allowed for next time. I did not save the new toothbrushes for later. 🙂

We walked on the beach a lot, and on the trails. We didn’t crab, clam or fish this time. Instead, I read and napped. One day, I played games with Jake all morning. That day, Rob took Patsy and Micheala on a drive across the bridge from Oregon to Washington. It’s becoming a tradition since Michaela loves doing that.

We visited the Ft. Stevens Military museum, which includes a small indoor museum and a large outdoor compound of bunkers and ruins from the past. Even thought the kids got behind bars, they soon showed that they could “break out” from a different window. They had fun crawling out of the “jail.” We found a nearby playground and let them swing and play. It’s the simple things that go over the best with our crew.

We saw lots of wildlife including elk, deer, baby fawns, birds of many kinds and even whales! It was an amazing week on a lot of levels and I’m glad we could go.

Before we left, I did slip away one day to the 4-H fair where we used to live and judge the food preservation for the 4-H. I haven’t been able to do that for a couple of years, and it’s so fun to do. As a bonus, I also got paid, but it’s so fun I’d probably do it for free. Shhh….don’t tell them. I’ve already got plans for that little bit of extra money.

I’ve got 2 big boxes of apples to preserve in the next few days. There is salsa to make. I’m ignoring the fact that I can see red tomatoes appearing on the bushes again. I’m also ignoring all the weeds. After ignoring the house cleaning all week, Patsy and I got busy with that for a while this morning and at least there is a place to sit down in peace between canning. And, there’s hope that a person could actually sit at the table to eat in a day or two. Thank goodness, Rob did not ignore the laundry and has washed and folded it all. I don’t have to can wearing my Sunday clothes. Whew!

I plan to get back to regular posting, hopefully early in the week as is my habit, but I make no promises until this pile of produce is safely in jars and the freezer. It’s that time of year. So, I may be spotty for a little while longer before I can bask in the glory of full cupboards and freezers.