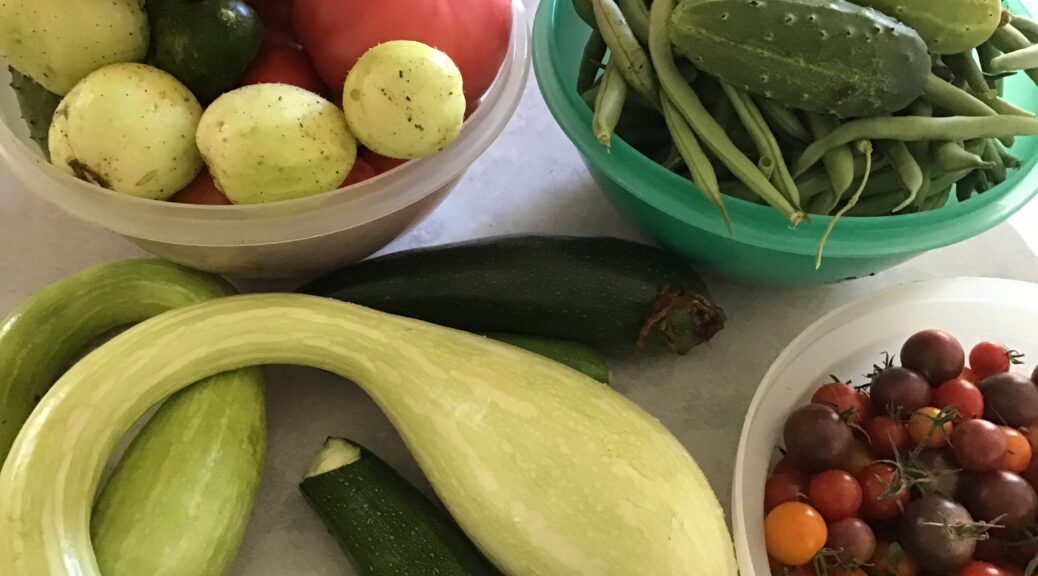 My garden looks like a complete mess! Still, on Sunday after church when I went out to pick a few things, I got all this and another huge bowl of beans. They were the surprise, since I found the bulk of them on the 3 short rows of bushes I just haven’t gotten time to pull out. They obviously bloomed again and reset more beans. So, among the dried-up, too-old beans was another batch of beautiful, just-right beans.

I cooked a pan full for eating. I gave a bag to my sister and one to my aunt. Then, I froze 4 bags. We don’t eat that many frozen beans, but always use a few each winter. I had only frozen about 4-6 previously this way, so these will be used with no problem. The pole beans should continue to give us enough for fresh eating for a few more weeks.

With my freezers groaning with all of this summer’s bounty, I need room! I pulled a turkey I purchased last fall when they were very inexpensive and Rob cooked it on the bbq. Then, I de-boned it, made broth and canned most of it. The rest was eaten fresh and some is for turkey enchiladas.

I used the boxes and bowls of tomatoes and finished up the salsa. I believe I have enough for these salsa-crazy people around here. With the few that were left over and what I made, I now have 72 jars of assorted sizes–everything from 1/2 pint to quart. Salsa is one of the more time-consuming things I can, so I’m glad to have that project finished.

I also got one canner load of tomato juice and one of crushed tomatoes. I need to do a few more whole tomatoes, but those are easy.

There are still tomatoes on the bushes, but they are winding down. There will be plenty for us and the extended family to eat for several more weeks, until frost.

I froze jalapeño peppers and Hungarian Wax peppers together, as they have about the same level of heat. It was very easy to pick and food-process them while I was making salsa. We don’t use very many of those in a winter, but it’s nice to have some. I package them very thin and flat in a quart-sized ziplock bag so I can break off little chunks when I want to throw just a few into a recipe.

Even though I’m still canning, and school is going full-force, meals need to be cooked. I made this breakfast “egg pie” with a frozen hash brown crust and eggs, a little ham, some leftover garlic cream cheese, spinach, ham and cheddar cheese. It came out great.

I’ve used all the chicken, meat and baked goods from the camper freezer, and am concentrating on using things from the house fridge freezer. It seems to cause an avalanche every time we open it, so it’s time:). Past time. Since we crack out our ice from ice cube trays and fill a Ziplock in the door, AND use a lot of ice daily, this can happen multiple of times each day. It’s getting annoying, to say the least. I can see why housewives of years gone by did fall cleaning. After all the food preservation and gardening, there are just too many areas that have been left to themselves around here.

The grocery money that was spent this week was for basics such as turmeric, salt, milk, eggs……you get the idea. As with most spices we buy, Rob was able to get the turmeric in bulk so it was not expensive. I don’t use much, but it was depleted in some of my pickles recently. It was nice to not need much else so I could fill those things up (and more) with my regular grocery budget. I did get a Coke Zero and some riced cauliflower for free from my Safeway card. The Coke Zero is long gone. The riced cauliflower—-hmmmmm. I’m going to try it soon so it doesn’t linger longer and make that freezer problem worse.