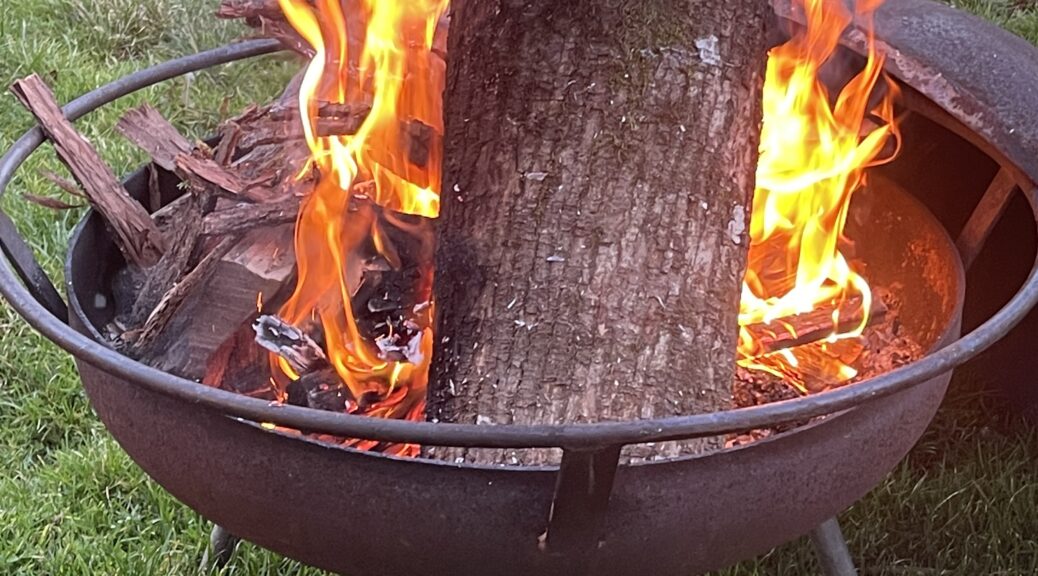 This year, we decided to simplify gift-giving and focus more on experiences of the season. I started with being in the Christmas production at church. Then, the choir sang a couple of the songs from the program for both services last Sunday. Now that the program is over, we’ve moved on to some other activities.

Rob has been building fires in the yard in the fire pit. Sometimes he and Malcolm roast hot dogs, and sometimes they just watch it burn. It’s been very cold (for our area-no one laugh from South Dakota), but Malcolm needs to burn off energy, and we try to get him outside a little each day.

We had a party for our Sunday school class of 5th graders. Rob gathered branches of fir, pine and holly from my sister’s farm and we made greenery swags. We used coat hangers for a base, and some little additions and bows I purchased at JoAnn’s. They were on super sale over Black Friday and so I got them then. I’d show you the finished work, but I don’t want to post pictures of the class without parental permission. Some were more sophisticated, and some were pretty rough, but all of the crafters seemed to have a lot of fun.

The fire pit was burning the entire time, as it was about 25 degrees that morning. Around 11, we finished the swags and roasted hot dogs. Truthfully, the kids were having so much fun tearing around in the little car we have in our yard that they almost forgot to eat, but 2 bags of chips were downed pretty fast once they remembered. My mom had come over the day before the party and we made cookies–sugar cookie trees decorated with green sugar and a star, and some bar cookies. We finished the party inside with games and a short devotional. Rob had wrapped a present over and over, with pennies and candy in some of the layers. Inside was $1. That old game was just as fun for these kids as it was for me when I was little and they unwrapped and unwrapped layer after layer when the music stopped, and passed it around when the music was playing. It was fun for all of us, Rob and I included.

We visited the carousel with Malcolm. The waterfront park was decorated with lights and we walked around for a while before we rode the carousel. Mac was not convinced that it was going to be fun, so he and I snuggled up in a wagon and had a pretty good time. We want to grab baby brother another time and take them both. I think it will be easier the second time. It was a very fun outing for under $2, as they let me ride for free. I haven’t ridden on a carousel for ages. It was fun!

We were invited to a friend’s house to frost Christmas cookies this afternoon. This lady was Jake and Michaela’s nanny for years, and our whole family loves her so much, so Rob and I were delighted to get to see her. Much to my surprise, both Malcolm and the nephew of the hostess were much more interested in her coasters than the cookie operation! We had fun visiting, though, and brought a plate of cookies home to enjoy.

I did a little more sewing this week. These pajama pants were made from a remnant of fabric and cost me less than $2 to make. I was able to use the same pattern as I used for the bathrobe I made last week. I also worked on a pair of sleeping shorts for Rob from some fabric someone gave my sister, and she passed on to me. I’m not quite done, but will work on them this week, along with the bathrobe for the littlest grandson. For Christmas week, that is a noble goal, and I’ll see if I get any of that done:)