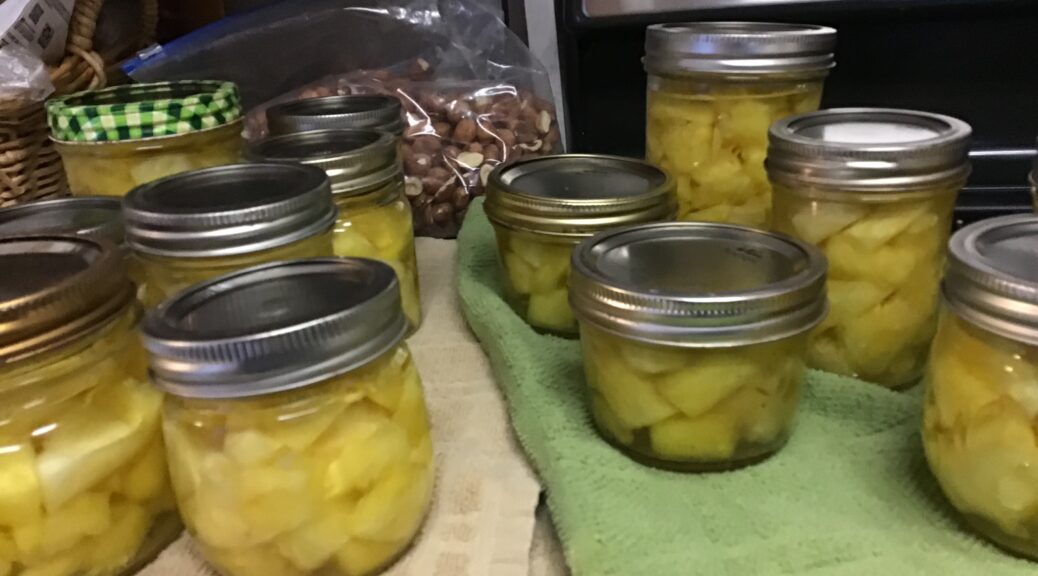 I love the new year, every single time! It’s just so fun to “start over” even if it’s just psychological! I spent some time cleaning up Christmas (to the music of sobs and crying as my poor grandson was not on board with my decision to put those fun things away!), and put out a few cold weather-themed candles, just because it’s so dark this time of year.

He does like the cleaning part, though! He swept and vacuumed and scrubbed for quite a long time.

I am very predictable in January. I always want to clean out foods that have been sitting around for a long time on my pantry shelves, continue hitting the home-preserved foods hard, clean the house, and save money. It’s just what I do this time of year.

Rob and I removed an area rug in the living room, cleaned it, hung it to dry on a ladder in front of the fire, and swept, vacuumed and mopped under the couches. It was a huge job, and the rug is still drying, but it’s good to get such a big project underway.

I got out a big bowl of beans to soak and am also making split pea soup with ham broth that had been previously frozen and split peas from the shelf. I brightened it up with a pint of my canned carrots, and they do look pretty in there. The beans will become chili, refried beans, and plain beans to freeze for later.

I checked out a library book called “The Simple Comforts Step-by-Step Instant Pot Book” by Jeffrey Eisner. This recipe was in it and it was SO good! It’s called Teriyaki Chicken. I’ve made a couple of other recipes from there, also, so I had Rob look it up on Amazon and was able to buy it for only $11!

I spent some time sorting my herbs and spices and re-filling my jars in the kitchen. I buy them in bulk and use the same little jars over and over. I save a tremendous amount of money this way. Some spices or mixes, like Mexican seasoning and chili powder are used so much I buy huge packages of them. Others, such as cream of tartar and ground mustard are used much less often, so I buy only a small bit of them at a time. Now they are all full again, which saves me time on busy days and lets me know what I need to buy before long.

I canned some pineapple. We don’t use much of it, so this will likely be all I need for the next year.

I was given hazelnuts and walnuts, and look forward to using them this year as well. I froze them to preserve freshness. The ones you see in this picture are last year’s, pulled from the freezer to rotate them. I roasted a large pan before Christmas and took a few to Christmas dinner, as did almost every other sister in some form or other:). That’s what your get when you are all raised on a hazelnut farm–hazelnuts say holiday to us!