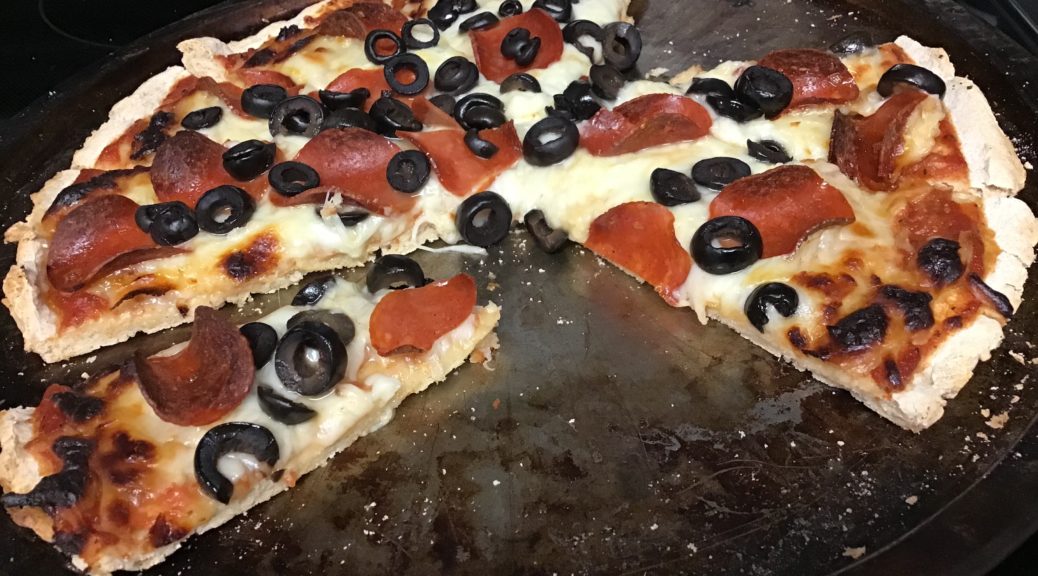 This week, I made gluten-free pizza twice. The first time, it was deep dish combination pizza. I killed part of the yeast by using too hot of water, so it did not rise well. Still, it rose enough that we could eat it, and so we did!

I also made up a few baggies of the dry ingredients for the pizza and put them on the shelf for another time when I want to make it quickly. Now that I have the recipe working properly, I will post it soon.

Rob barbecued some steak. I sautéed some frozen shrimp. I also made turkey-burger meatloaf, which we ate a few times until it was gone. We ate the chicken we got last Friday at Costco, boiled the carcass and made broth, which turned into chicken and dumplings.

We ate several kinds of canned and frozen fruit, including frozen blueberries, which Patsy ate straight from a bowl while they were still frozen. She also had smoothies a couple of times and used more frozen fruit in those. I’m not exactly sure what else came out of all those empty jars that are waiting to be put away in the shop, but I know we enjoyed eating whatever was in them!

We had home-canned green beans, lots of carrots, and quite a few salads. We had baked potatoes a couple of times and Rob made home-shredded hash browns, too.

It was a very busy week, full of medical appointments, working extra time with the kids, and other things we did. I feel happy that I got as much cooking done as I did and that all of the dishes got done, too! (Rob can’t wash his fair share until after he recovers from one of his medical tests, so I’m merrily washing away. Every day. Every dish. Patsy dries and puts away. By the way, Rob is very, very fine–it was a great result, praise the Lord–and he’s trying not to laugh too loud about having to take a break from dishes and hauling firewood!).

Jake and Michaela ate dinner here tonight, and they had cinnamon sugar toast on whole wheat bread. (Under duress, she ate 1 baby carrot and Jake ate 2 cucumber slices) Jake wants to spend the night, but I took Michaela home because she wants to be there. While I was gone, Rob cooked eggs and eggs for Jake, and he topped off his evening with mini-marshmallows, washed down with grape juice. How’s that for a before-bed snack? Hmmm. I hope your meals were less eclectic! 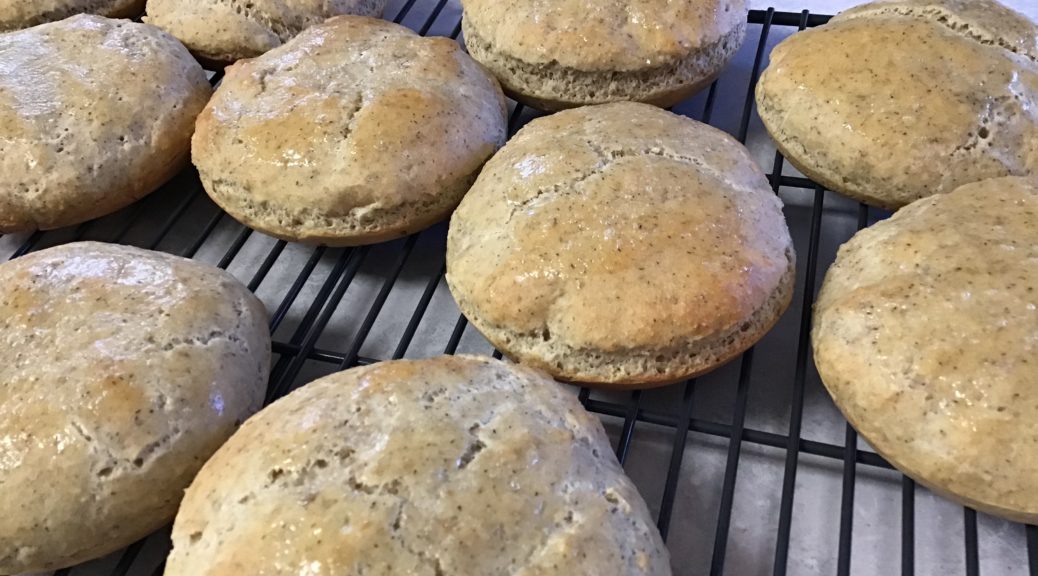 I haven’t made gluten-free buns for a long time. It was time. I have a favorite recipe that I’ve made for years and years.

This recipe uses oat flour as a base and they are so yummy. They also don’t take very long to make, as they only have to rise for about 30 minutes and bake for 15. The thing that does take a lot of time for me is rounding up all the ingredients.

After I had dug through my bin of gluten-free flours and other products, I was able to come up with everything that was called for. Then, I decided to take the opportunity while it was all out to make up some mixes so I could make this again soon in a hurry.

When I was done, I had 4 bags to make up another day. Today, I made a double batch, and will freeze the left-over buns for the future as well.

I was delighted to enjoy these yummy treats again. I saved money by making them myself vs. buying buns for between $5 and $6 a package. Since I made a double batch, I got 12 buns. That would be equivalent of 2 packages at the store. Gluten-free flour is not cheap, but it wasn’t $12 for flour for these buns. Also, I had it all on hand! I used up bits of flour that had been around for a long time.

While I was at it, I emptied my gluten-free bin, washed it out, discarded a couple of things that were rancid or really, really old (come on, Becky….pancake mix from 2014? Really?), and put everything back in an organized fashion. Now, I know what I have and what I need to replace. My January “Use-it-up” project is coming to a close, but I can see there are quite a few items that still need to be used, so I can feel a February project coming on.