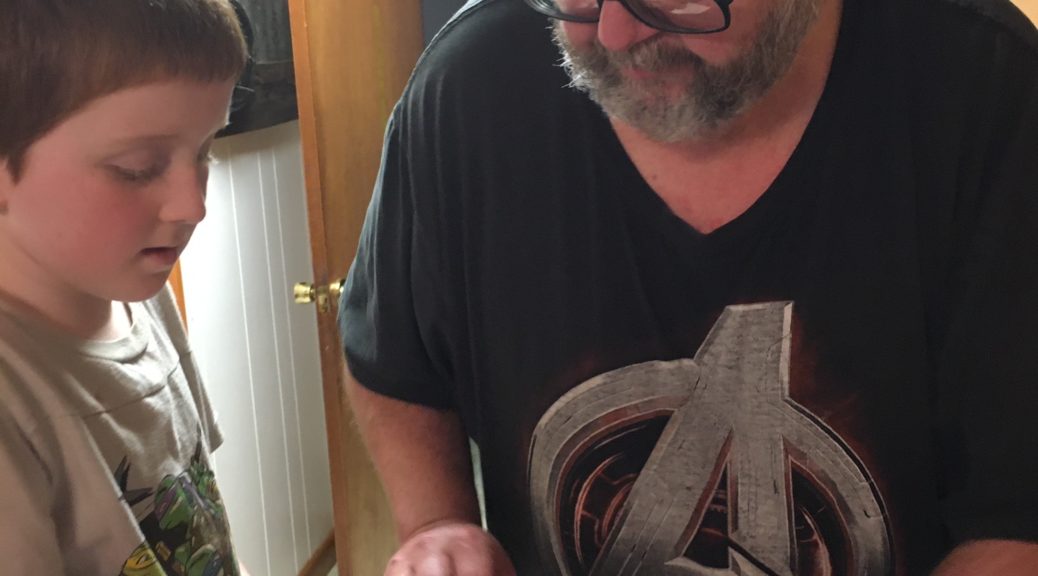 We had a 4H meeting this week. Rob worked with the kids on knife skills. He had them practice one at a time as they chopped ingredients for the chili.

I was so glad he could be here to help. Lots of little kids + knives = scary!

Our original plan was to have some outdoor cooking, but it was COLD. So, we made chili in a pot on the stove, baked beans which actually did not bake in time, and a simple yellow cake. So, everyone feasted on chili and cake, and I opened some jars of home-canned fruit to fill in the gaps.

Jake got to crack eggs, which made him happy.

We also worked on nutrition, and focused on making “My Plates” from construction paper and old magazine pictures of healthy food. I really saved some money on this project, by default. My printer ran out of ink, and it could not be ordered in time for the meeting, so Patsy just drew circle shapes on the paper, and I didn’t run out and buy ink at a higher price.

When the meeting was over, Rob needed to take Jake home and drop Patsy off at youth group. Several of the other kids clamored to go, too, so Rob loaded up the van as full as it could be, and hauled the lot of them off to church. The Mom that remained and I were laughing about the fact that it was so quiet with “only” 3 little kids left! (And, just for those who “love to know”…..Jake has a special class on Sundays he attends, and Rob accompanies him to his choir/class on Sunday nights, but there’s not a “special” class for him on Wednesdays. So, he stays at his home on Wednesday nights)

Rob and Jake found a couple of games at a garage sale. They played this one called, The Allowance Game, and Rob said it was a great way for Jake to work on money skills. It must have been fun because Jake and Patsy played it several more times. They also played Monopoly Jr. and regular Monopoly. Jake spent a couple of nights this week, and is begging to spend 10 nights soon. I said, well….no:). Not that many! But, another night soon, Jake, soon!

We cooked a lot of food, mostly from our freezers, canning cupboards, and pantry. Rob picked up a few items from the store, but kept it under $20.

When I empty a home-canning jar, I put it in a basket on the dryer. I always feel like I’m being successful in using my resources wisely when I need to take the basket of “empties” out to the main shelves in the shop. I emptied the basket this weekend, and already have it almost full today. Success! This is the time of year when I like to use many, many jars and frozen items, since during the summer I enjoy eating as much fresh garden produce as possible.

I cut out a top for Patsy from some fabric I purchased for $2 last fall. Now to find time to sew it……

I went to a local high school to watch the musical “Hello, Dolly.” I really enjoyed watching it. It was so well done, and there were a few kids from church in it that I knew. My sister took Patsy and I. She wanted us to see it, badly. She watched it 4 times, herself. It was that good, and they are close family friends with the young lady that played the character Dolly.

Rob finally got an appointment to see the surgeon. It’s in a couple of weeks. They should set a surgery date at that time. I sure hope they do.

I exercised quite a few times, in various ways, including taking the dog on a long walk and taking aquatic classes at the Kroc center.

We ordered our seeds, and they have already arrived. I received an e-mail from Territorial one day about a 20% off sale, ending that day. I quickly finished sorting my seeds, finished my partially-finished list, and ordered. I sent Rob to the Dollar Store for things I use from there, such as pickling cucumbers, then ordered our more-expensive, but desired, seeds from Territorial and then finished up with my Pinetree order, since we were at it. I need disease-resistant tomatoes, lots of bean seeds with high-yield, and crops that ripen in short time periods to have a successful garden, so I’m picky about some varieties.

The next step is to get the greenhouse up and running–junk out, lights set up, and a few seeds started. It’s not too early to plant peppers, onions, and a few other things. Some things need to wait a bit longer.

January has been pretty calm. I think things are going to heat up in February, so I’m going to enjoy one more week of calm. Ahhh….