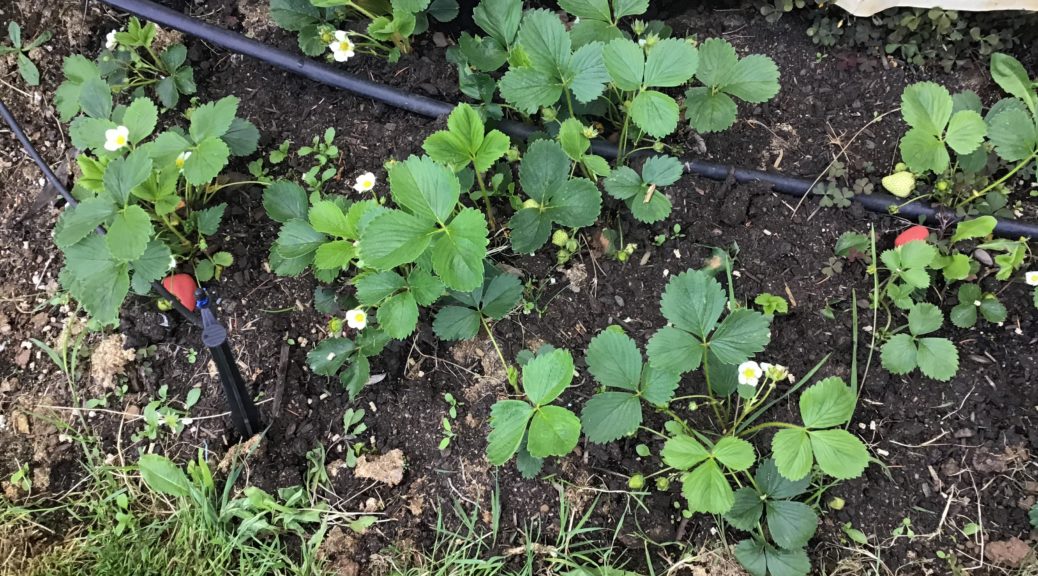 Does it look like I have ripe strawberries? Well, I don’t! Those are rocks that Patsy painted red. We hope they fool the birds and stop them from pecking the strawberries once they get ripe. Let’s hope it works!

I spent hours in the garden and yard this week. Everything is growing, including the weeds, so I’ve pulled weeds and hoed.

I also cut and trimmed in the front yard. The people who lived here before us planted many bushes, such as rhododendron, azalea, peonies, Oregon grape, and sadly, ivy, that have all grown greatly over the years. Over the past 2 years I have tried to cut some of it back to more manageable proportions, one yard debris bin at a time. The latest project was to have Rob take a chain saw to some rogue blossoming cherry tree suckers that were now about 15 feet tall and chop them down. I removed ivy from below and harshly trimmed the bushes under the remaining main tree. Then, I hoed out grass and weeds and roughly edged the area. It looks a lot better now, but there will be on-going work to do. I was glad to finish as we have been working on it for 2 weeks and filled 2 yard debris bins from that one area alone.

Rob covered my lettuce with netting. The birds took part of one row down to the stubs! I notice they leave it alone after it gets to a certain size and I’ve planted a lot, so it will work out ok in the end. (And, yes, that’s a renegade potato plant on the end. I didn’t plant any this year, but a few volunteers came up anyway.)

I’ve been harvesting from the garden and making lots of stir-fries. Rob’s been eating vegetables for breakfast each day, as well, so the harvest has come in handy.

I made a batch of bread and buns. I am still using up odds and ends of gluten-free flours, some of which are literally a couple of years old. I am happy to report that I used 3 partial packages of flour all the way up! I don’t normally eat a lot of bread, so I froze most of these items. I have eaten more sandwiches then usual lately after working in the garden, because I sometimes don’t feel like cooking. It’s easy to pop off a couple of frozen slices, slide them into the dedicated gluten-free toaster, and always have fresh bread when I want it.

We cooked black bean/pinto bean chicken chili, Patsy’s peanut-chicken stir fry, smoothies, pancakes, boiled, fried and scrambled eggs, millet-crust pizza, lots of salads, brownies, pear-raspberry popsicles, and many stir-fries. Lovana came over and made coconut shrimp. It was so good! We also worked on a ham we bought right after Easter. We had ham sandwiches, ham with eggs, and just ate ham. Some packages were frozen for later use, as well.

We did our grocery shopping for the next 2 weeks and ordered and received an Azure Standard order. Eggs were 4/$5. We got many dozens. I purchased a lot of produce such as cucumbers, mushrooms, baby carrots, celery and peppers, along with whatever was on the list. There were a few good deals, otherwise, the prices seemed to be the same or a little higher than they have been in the past. Overall, the bill is higher than what it was a year ago. It is not possible to shop several stores for deals right now, so if it’s there, I buy it, or I just pass it by if it’s unreasonable. I was pleasantly surprised to received most of what I ordered from Azure.

We worked with Jake and Michaela for more hours this past week. We had a French fry party one day. It was fun for everyone to make our own curly fries outside.

We also fried up some battered cod fish and onion rings, just to add to the fun.

We used a fryer we purchased from a garage sale a couple of years ago for a few dollars and then spent literally hours scrubbing to insure it was gluten-free and no wheat crumbs were left on it. Thankfully, it looked almost new when we bought it. The curly fry cutter was also from a garage sale and normally lives in the camper. Every few years, we make fries on a picnic table at a campground. We make fries so rarely that it’s an event and made an ordinary day into a party. Better yet, we kept the mess outside!

Did you do anything unusual to break up the monotony of Covid 19 with your kids or for yourself?