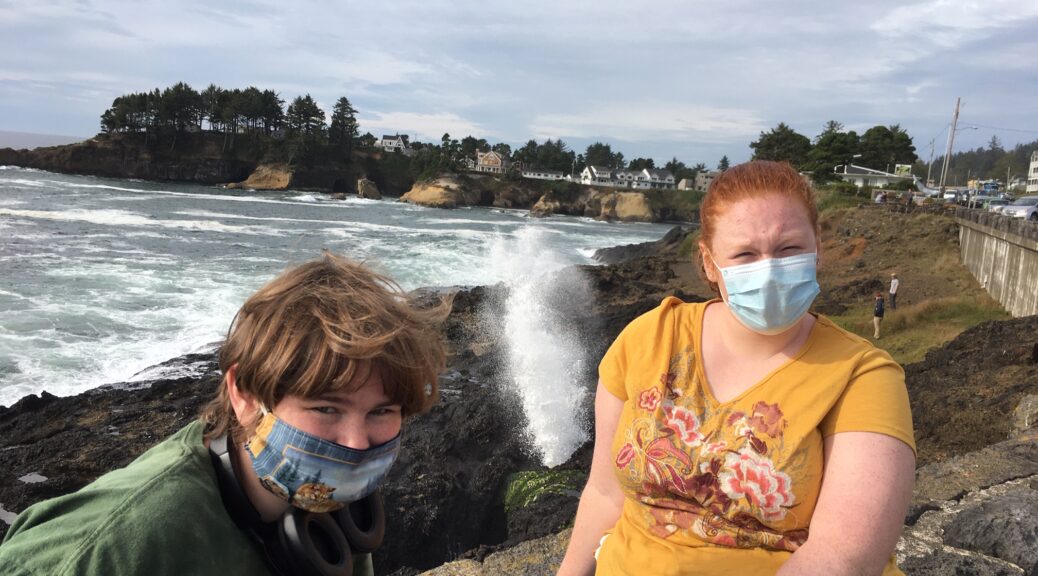 Another eventful week! Can you see the sea lions in the background? One day, Michaela needed to get out of the house, so we kidnapped her and drove down to Newport to see the sea lions. We were looking for what she calls a “country drive” and some sight she could look at that were outside. This fit the bill. These sea lions are a fixture along the waterfront of downtown Newport and they kept the girls, and everybody else, entertained as they barked like sea lions do, pushed each other off the docks, and swam playfully in the water. Of course the girls wore masks, they just took them off for the picture……the seal lions did not seem to have any:).

The weather was cloudy, but not cold, and we enjoyed looking at the bridge in the distance.

After a stop at a candy store, we stopped at Depoe Bay and were fortunate enough to be there at the right time–high tide–to see the spouting horn spouting water up into the air. Then, to make it better, in the distance, we could see whales spouting! What an amazing day!

Rob and I spent a day canning chicken products. I have been waiting for months to see split breasts come on sale for 99c/lb. I was starting to think I was not going to see that price again, until Rob finally spotted it in an ad. I de-boned the breasts, and made broth and soup from the bones and the bits of meat left on them. I filled 1/2 pint jars with the chicken and a little broth and made a huge batch of soup while Rob babysat the canner(s) (all 3) until the processing was done. Thankfully, we can do 2 at one time, and thankfully, we were able to triple stack the tiny jars (separated by racks) in the biggest pressure canner we own. That all helped speed up the process.

A different day, I canned 7 more quarts of diced tomatoes. I had 1/2 bowl from my garden and asked my sister if she had any to fill a canner of pints. Boy, did she, and more…and I did quarts instead. Most of our tomatoes are done, though, so I think this will be the last batch of those. I have to say that’s kind of a good thing, although I do love food preservation. My freezers are full, and my canning shelves are so full that I sincerely cannot fit many more jars in there. A friend gave me some jar lids that she was not using, which I thought was very nice. I’ve used them.

When my sister brought the tomatoes down, she brought a box of apples as well. Rob’s been drying them. This is the first year we’ve used our dryer for a while, and we’ve done several kinds of fruit, some chives and some parsley, so far.

I used mixed cherry tomatoes to make tacos one night. It just felt so gourmet….

We’ve also had potato soup and potato salad…can you tell I had a bag going bad? When I went to Winco for a few items, though, I found 2 bags for 99c/each so now I’m stocked back up on potatoes.

I used up a few items on my pantry shelves that had been there for a long, long time. I re-filled several spice jars in the kitchen from my bulk supply that I keep in the garage pantry. I also filled cocoa powder, 1-1 flour, sugar, and more containers from my bulk supply. I made some buns and bread from the mix I made, and some applesauce muffins. After so much time spent in the garden, and on food preservation, my kitchen needs some cleaning and organizing and my supply of frozen ready-to-eat food needs replacing. There’s lots left to do, but I got a little done this week.

We were able to see Anthony and Allison at a park near where they live. It was Allison’s birthday this week. I made some cupcakes and frosting, decorated them with some sprinkles we had on hand, and packed a picnic for us all to enjoy during our visit. It was simple and we all had to keep our social distance, but she enjoyed her gift, and her picnic, I could tell. It’s going to get way more difficult to do these outside visits as the weather changes, so we were grateful that it worked out this time. For those of you who are new to my blog, Anthony is one of our sons. Allison is the love of his life. They both live in a group home for special needs adults in a town about 30 minutes from where we live. So, it takes a little bit of organizing to get to see them, but it’s worth it! They are both so sweet.

We are very grateful and praising God that we got another soaking rain. The wildfires are still burning, but they are being contained. The rain soaked the forest and it will not burn as easily. There are still many, many people who are affected, and we will continue to pray for them.