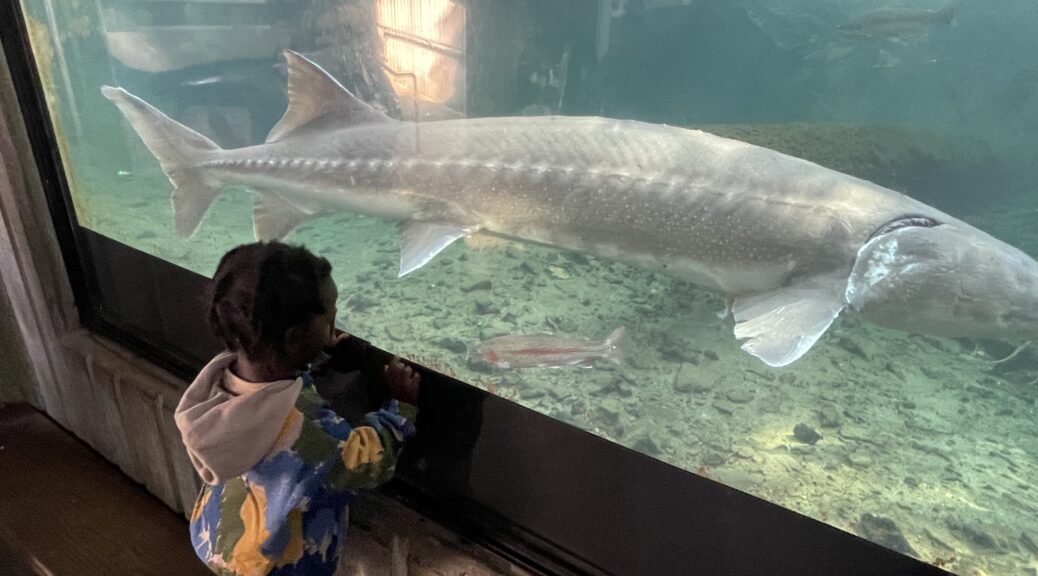 On Saturday, we took Malcolm up the Columbia River Gorge. First we stopped at Lewis and Clark park and let him run around and crunch leaves for quite some time.

We went further to the Bonneville Dam Fish Hatchery. This is the sturgeon viewing center. A gentleman told him to flap his arms and say “sturgie, sturgie, sturgie,” and the fish would come over. He did, and they did. He scrambled down from that little ledge as fast as he could. That fish was MUCH bigger than he expected. After that, though, he watched for a long, long time. It was fun.

There were small fish in there, too, and he liked the itty, bitty, baby fish, as well.

He fed the large trout in that pool. We only had 3 quarters on us, so could only get 3 small handfuls of food, but he seemed to enjoy it while it lasted.

He even saw Bigfoot!

The picnic was fun. We took bubbles and spent quite a bit of time running around trees and blowing bubbles.

There’s a lot of wind in that area, so they flew quite a ways. When we realized they were blowing right onto another family’s picnic, we stopped. Oops!

We toured Bonneville Dam as well. As you can see, he was getting pretty tired by this time, but he liked the firetruck outside as much as anything there.

And, why, may you ask, did we take a toddler on such a long car trip? It was because his auntie had a hair appointment in NE Portland and we agreed to be her transportation. That is quite a distance from where we live, so we decided to just stay up in the area, and have a good time with Mac. We dropped her off at 9:30 a.m. She was finally finished at 6 p.m. Her hair is now beautifully braided with extensions, as she likes to wear it. And to think she will get to do it all over again in 6-8 weeks. What a patient young lady!

Although we do not usually take her for these hair adventures, it turned out to be a really fun day and Malcolm did great! He’s still talking about those fish! For such a little child, he tolerated the long car ride very well.

Even with all those activities, we had a lot of time to kill, and spent a bunch of it in a traffic jam around Multnomah Falls. We had decided to take the scenic highway and clearly there were more people who wanted to visit the falls than there were parking spaces, so we all sat there for a long, long time. We didn’t actually decide to stop there, as it was so busy, but enjoyed a quick peek out the window. We’ve seen it many times and will have more chances some other time. We drove up to Crown Point, and looked down on the Columbia River. It was extremely windy up there.

I did a little more canning. These jars have layers of carrots, celery, onion, potatoes and hamburger. Then I pressure canned them using the longest processing time, which was for the hamburger. They will be quick dinners and used up some of those potatoes Rob got inexpensively.

I spent several short sessions picking all the tomatoes, green and red. I’ve pulled up almost all the vines and removed the cages from the garden. I also pulled most of the pepper plants. Several other veggies are gone now, too. Because my garden is so large, I cannot seem to find the time to do it all in one day, so I’ve been chipping away at it when I can. I also worked on a couple of raised beds and one flowerbed a time or two. They say the fall rains will begin this weekend, and our beautiful weather is going to be over, so I’ve been trying to get as much done as I can.

The week was full of lots of visitors, which translated into lots of cooking. On Monday, our son Anthony came over with Allison. Patsy, who has decided to move out and is living with friends, decided to come over for the afternoon. She did this twice this week. My mom and I spent a relaxing day on Friday.

I also cooked for the college-age group at church on Tuesday.

I cooked chili mac, a huge pot of chili for the kids, cornbread, brownies, turkey soup, turkey gravy over mashed potatoes, potato soup, enchilada casserole for myself and a friend with a death in the family, and more. I decided not to go shopping, but instead to use my pantry and freezers, and had plenty. I really utilized the turkey bits I had frozen a couple of weeks ago when I roasted one from last Thanksgiving time. The main substitution I had to make was to use powdered milk a couple of times instead of regular, as I ran low on that, but it all worked out. I had Rob pick up a gallon today, so that’s good now.

I wanted to clean out the fridge a little, and it’s finally looking a little more empty. It was just too crammed. I worry I will end up wasting food if I can’t find something, so periodically I refuse to shop until it clears out a bit.

I made a large batch of cupcakes and sent some over to a young family friend who had a birthday today. The rest I froze for future busy weeks.

We also enjoyed a bonfire hot dog roast with our Sunday School class on Friday night. Although we’ve only been working with these kids for a few months, this is a tradition they have done for quite a few years before Covid happened, so the children’s pastor wants to get it going again. A family puts it on at their farm. Other than Rob giving a short devotion and helping out a little here and there, we got to just enjoy ourselves and the kids. It was a beautiful evening and the kids all loved it.